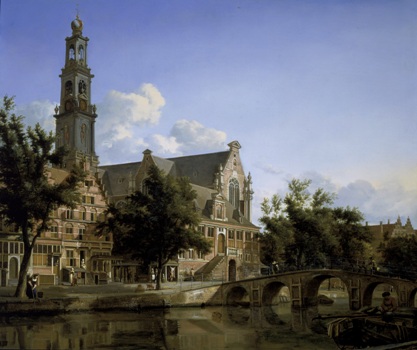 Almost as fascinating was learning the ways in which political and religious freedom, trade and science fostered artistic freedom and art appreciation in the Netherlands of the 1600s. A bonus for me was meeting the van Otterloos at San Francisco’s Palace of the Legion of Honor press preview and finding out how they built their collection.

The emergence of the Dutch and Flemish Golden Age of painting is a significant event in the history of visual art. In the late 1600s, the northernmost provinces of the Low Countries broke away from Spanish and Catholic domination. They eventually became the Dutch Republic and largely practiced a form of Protestantism, the Dutch Reformed Church.

Surprising Europe, this small nation thrived without any religious or royal leaders. In fact, the Dutch Republic succeeded beyond all expectations by dominating world trade, conquering a huge colonial empire and operating the largest fleet of merchant ships of any nation. The Netherlands’ stock exchange, the oldest in the world, was founded in 1602 by the Dutch East India Company.

Controlling one of the strongest navies in the world, the Dutch gained spheres of influence in Europe, Africa, the East Indies and Japan, and the “New World.” In fact, many of the United States’ founding principles are derived from the Dutch Republic’s Declaration of Independence and Constitution. The exhibit reflects the enlightenment of the period.

With a booming economy and the growth of the prosperous middle class of Dutch burghers, a unique style of art developed, with Dutch and Flemish artists painting portraits of individuals, cities, buildings, landscape and the culture surrounding them. Many Flemish artists moved northward to gain the freedoms enjoyed by the Dutch. Their precise and elegant style added to the quality of the genre.

The van Otterloo’s marvelous collection contains more than 70 rarely seen masterworks, all in nearly perfect condition, including intricate and detailed Dutch landscapes, maritime and city scenes, portraits and still lifes. Although I was familiar with some of the artists in the exhibit, e.g., Rembrandt van Rijn, Frans Hals, Jacob van Ruisdael and Jan Steen, I was delighted to view wonderful paintings by artists new to me, such as Jan Davidszoon de Heem’s “Glass Vase with Flowers on a Stone Ledge,” Adriaen Coorte’s “Still Life with Sea Shells,” Jan van der Heyden’s “View of the Westerkerk, Amsterdam” and Aelbert Cuyp’s “Orpheus Charming the Animals.”

The Golden Age style is exemplified by the subtle and natural paint colors that reveal the quality of the northern light, the flat landscapes and blustering seascapes unique to the Netherlands, the precise brushwork often painted using only one or two bristles, and the small sometimes-moralizing humor found in the works’ details.

For example, Jan van der Heyden’s serene “View of the Westerkerk, Amsterdam,” depicts the layout of the church in complete detail; each minute brick stands out, yet appears quite natural. Perhaps because van der Heyden was also an architect, engineer and inventor, he could maintain the exact linear perspective needed for such realism. Looking more closely, one can see that image of the church in the canal is more impressionistic that the rest of the work.

Rose-Marie van Otterloo told me that her favorite of all her treasures is Jan Davidsz. de Heem’s “Glass Vase with Flowers on a Stone Ledge.” It’s easy to see why. Although at first glance it is merely a beautiful still life, on closer inspection, it seems completely authentic down to an ant on a petal. Interestingly, the flowers are from different seasons and so wouldn’t all be seen together. Enhancing the piece is the dark foliage and dark backdrop from which the flowers seem to spring to life.

Adriaen Coorte’s “Still Life with Sea Shells” also has a shadowy background that draws attention to its unusual eerie seashells and claws from around the world. Not the typical subject of a still life, there is a challenging power in it. This stark piece seems to be a forerunner of surrealism.

The large and enchanting “Orpheus Charming the Animals” was realistically painted by Aelbert Cuyp, although he had never seen the animals personally. Again, the animals are from different continents and climates. Subjects drawn from mythology were often used to establish parallels between the Dutch Golden Age and great historical, literary, and political events of the past.

Over the last two decades, the van Otterloos have assembled an exceptional Dutch and Flemish collection that reflects their cultural heritage. Eijk van Otterloo is originally Dutch, and Rose-Marie van Otterloo is Belgian. Counsel from museum directors guided the van Otterloos’ purchases. They were also aided by experts in establishing goals and criteria upon which to make decisions. For example, the van Otterloos always decide whether to buy a new artwork within one week of it being offered to them, giving them time for inspection by their experts and restorers.

Over time, both became knowledgeable and passionate art scholars. Rivaling any of its kind in the world, the van Otterloos’ collection is now valued at $250 million to $350 million. The van Otterloos continue to collect. Don’t miss this golden opportunity to see treasures of the Golden Age.