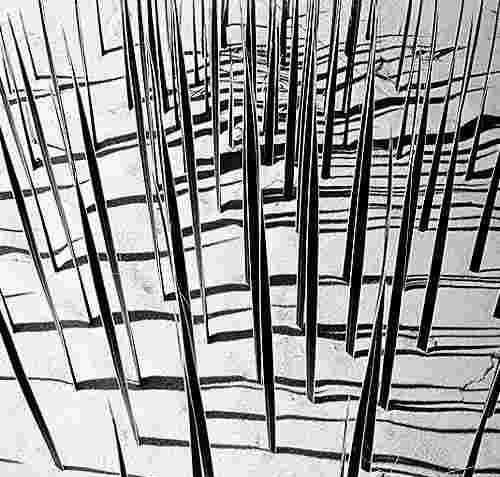 Luciano Monti is a portrait photographer by trade, but to judge by his current exhibition at the Museo ItaloAmericano, he is an art photographer in his heart and soul. When he had difficulty visualizing landscape in his native Italy, he journeyed to the great national parks of the American West where he was moved by the vast and unspoiled landscapes of desert, mountains, and canyons. The result was a body of photographs made in 1997-98 very much in the tradition of Ansel Adams and Edward Weston, both of whom Monti cites as important influences.

Among the American works are some on the macrocosmic scale, such as Sunrise, Zion National Park, which captures the vastness of sky and the sheer bulk of mountains in dramatic contrasts of light and dark. But Monti seems to have gravitated both towards abstract patterning, such as in photographs of dunes, and towards a more intimate, microcosmic view, such as The Branch, leafless evidence of nature’s cycle set against a background of swirling sandstone formations. Both the abstract and the small scale come together in a photo like White Sands 5, in which a miniature forest of spikey leaves poke up vertically out of the sand, while the strong desert light casts undulating shadows on the horizontal.

With the American experience internalized, Monti was able to return to Italy and rediscover his native landscape. Contrasted with his work in the West, he found that Italian landscape almost invariably reveals evidence of the presence of humans, as in Volcano, a view of the dried, cracked riverbed of the River Po, in which normally submerged fishing nets testify to the ubiquity of man.

The current exhibit pairs off 16 American photographs with 16 later works from Italy, providing both contrast and interesting comparisons. Island in the Sky is a sweeping Utah scene with dark brush in the foreground, mesas in the middle-ground, and mountains behind, all under a sky filled with cumulus clouds. It’s high-contrast lighting enhances the inherent drama in the vastness of unspoiled nature. It is paired with Colli Euganei, a landscape from the Italian Veneto in which fog shrouds the rounded tops of mountains, which protrude upward in soft, gentle curves. If the former is Baroque in its its drama, the latter is softer, more subtle, but no less full of wonderment.

A Joshua Tree in Arizona is a stunning piece of natural sculpture growing in the desert, silhouetted against a darkening sky, light gleaming off of its leaves. In contrast, olive trees in a snowy Italian field are covered with nylon, protected by man against the ravages of winter, wrapped as if part of a Christo packaging.

Monti finds poetry in mud, abstraction everywhere. His Engravings, a closeup view of river mud in Utah shows a mass of delicate tracery, a soft contrast of grays in the ripples and cracked surfaces of the mud. In stronger contrast, the detritus remaining in a field after the Harvest in the Veneto is a striking patterning of black stalks against white snow.

"The beauty of a landscape," Monti says he has learned, "doesn’t require a grand national park; it can be found even in the garden of a house."

(10848)
$4.79 (as of January 23, 2021 - More infoProduct prices and availability are accurate as of the date/time indicated and are subject to change. Any price and availability information displayed on [relevant Amazon Site(s), as applicable] at the time of purchase will apply to the purchase of this product.)
related posts