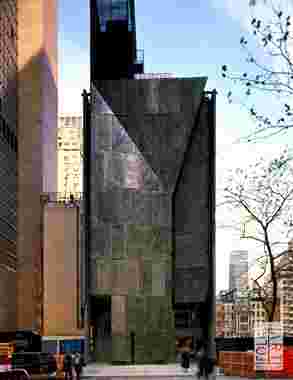 Darger: The Henry Darger Collection at

Completed in 2001, the current home of the American Folk Art Museum, by architects Tod Williams and Billie Tsien, has won numerous awards. An eight level narrow shaft of a building, its exterior presents to the street an irregular form made up of textured panels of a bronze alloy, giving the facade a sculptural quality which is strong without being unduly assertive (an all too common characteristic of some museum designs of recent years, designs which call attention to themselves to the detriment of their function of displaying the institution’s collections).

Given the space limitations, the architects have made creative use of the lobby, stairwells, hallways and atrium to maximize display space for the museum’s substantial collection, only a fraction of which can be seen at any given moment of time. The use of varying materials (concrete, hardwood, fiberglass) is both practical and pleasing to the eye, offering contrasts of texture while allowing the art itself to be shown to its best advantage.

Just as endless arguments could be made about the difference between art and craft, a tight definition of what constitutes folk art as against "fine" art could also be the subject of prolonged debate. The museum refers to its collection as "18th and 19th century traditional" folk art as well as the work of "self-taught" artists of the 20th and 21st centuries. Paradox abounds: There seems to be a suggestion of a naivete inherent in folk art, yet some of the works on view display such sophistication in the use of color, texture, and composition that naivete seems a misnomer. And certainly the stunning simplicity of, for example, a Shaker chest, displays a sophistication that could not in any sense be labeled naive.

"Art originating among the common people" has been a suggested definition, but Dorothy Yaffe, a 20th century artist whose "Dorothy’s World" fabric piece includes silk, lace, sequins, and metallic thread appears to have anything but "common" origins. A lack of academic training in art would seem to be the closest that comes to a universal characteristic.

The current display from the permanent collections smartly sidesteps the issue of definition and focuses of four themes that consistently seem to come into play in this art. Utility (items such as weathervanes, furniture, decoys, quilts), community (patriotic themes in decorative art, for example), individuality (the sly humor of Richard Dial), and symbolism. There are, of course, portraits which, particularly prior to the introduction of the daguerrotype in 1839, were the primary means of providing a record of oneself and family.

The variety of items is astounding: paintings, trade signs, mantels, boxes, cut paper, samplers, scrimshaw, pottery, trays, bellows, canes, baskets, teapots, rugs. And then there is the particularly odd work of Henry Darger–the Chicago recluse who left behind an epic of twelve massive volumes composed of some 19,000 pages of legal-sized paper filled with single-spaced typing. In addition, he left several hundred watercolor paintings, many of them illustrations for his eccentric epic. On display at the museum are two typical panels, with their peculiar little naked girls bearing male genitals as well as an air of innocence.