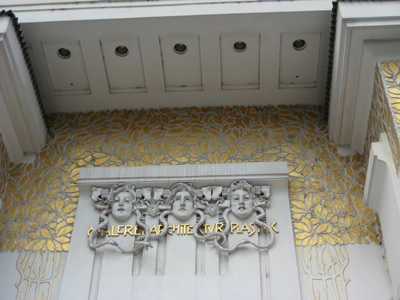 Detail from an Olbrich structure.

During the last half of the 19th century, Vienna’s massive fortifications, which encircled the old medieval city, were torn down and replaced by the Ringstrasse, a grand boulevard embellished with imposing public buildings—-the Parliament, the university, the natural history and fine arts museums, the Votive Church, and more. Each was built in a historic style: the Rathaus (city hall) and Votive Church were Gothic, the Parliament Classical, the University Renaissance, etc. The style was called “Historicism.”

Protesting this reactionary movement, as well as the conservatism of the Association of Austrian Artists (the Künstlerhaus), were a group of artists who styled themselves “secessionists.” The movement that came to be called Secession, founded in 1897 with painter Gustav Klimt as its first president, became one of the most influential styles of art in turn-of-the-century Europe.

Today, visitors to Vienna can see, among the splendors of the Gothic and Baroque, many examples of the buildings, paintings, and design that shocked the city’s bourgeois citizens a century ago. Many can be visited on foot or by Vienna’s outstanding public transportation system, while others require more extensive excursions outside the center. I’m going to concentrate on the close-in works.

Gustav Klimt is probably the best-known of the painters who came to prominence at the turn of the century. Reproductions of his highly decorative works—“The Kiss,” the two portraits of Adele Bloch-Bauer, etc.—appear in Vienna’s museum shops and souvenir shops on objects from umbrellas to coffee mugs to tee shirts. A print of one of his paintings hangs in the ladies’ room of the Hotel Sacher café. The actual paintings—ones that aren’t in private collections or in New York’s Neue Galerie—can be found in Vienna’s Leopold Museum in the MuseumsQuartier (the collection includes some of Klimt’s early, more conventional work), the Upper Belvedere (“The Kiss”), and in the murals of several other buildings: the Burgtheater, the Kunsthistorisches Museum (Museum of Fine Arts), the University, and, in the Secession Building (which was closed when I was there), Klimt’s Beethoven frieze.

The work of both Klimt and Schiele, who were friends, as well as of their contemporary, Oskar Kokoschka, exhibit a tortured inwardness that sets them apart from most of their 19th-century predecessors. Is it any wonder that they created their works at the same time that Sigmund Freud, another famous Vienna resident, was exploring the subconscious?

Vienna’s architects and artists were not immune to the charms of Art Nouveau, which swept Europe at the turn of the century. In Austria it was called Jugendstil (“youth style”), and among its earliest and most prominent practitioners was Otto Wagner, whose work, in bridges, railway stations, locks, dams, apartment houses, and other structures, can be found all over the city. As a title in the Kunsthistorisches Museum puts it, Otto Wagner “…unifies the end of the Ringstrasse era with the golden age of Viennese Jugendstil and the utility-based ‘functionalistic’ style that was largely unusual in 1900.”

Wagner’s Stadtbahn (municipal railway) station at the Karlsplatz, whose skyline is dominated by the immense Baroque Karlskirche (Charles Church), is an example of his 1890s Jugendstil period, as are the two nearby apartment buildings at 38 and 40 Linke Wienzeile, right beside the large and fascinating Naschmarkt (victuals market). Number 40 in particular, called the Majolica House for its decorative tile façade, fabulously displays the period’s infatuation with sinuous plant forms.

Later in his career, in the early 1900s, Wagner moved to a more austere style, as exemplified in his magnificent Postsparkasse (Post Office Savings Bank). The building’s simple exterior is faced with marble attached with aluminum bolts, which form part of the design. The interior, too, features aluminum in the (no longer used) heating towers and as part of the chairs, which Wagner also designed. The building still functions as a bank and is easy to visit.

A short ride out from the city center on the D tram is Wagner’s Danube Canal bridge, lock and lockhouse at Nussdorf; the bridge towers are topped by magnificent lion sculptures. On the way there, it’s worth stopping at the Karl Marx Hof, even though its period is the late 1920s rather than the turn of the century. An immense modernist housing project designed by Wagner pupil Karl Ehn, it contains over 1,000 apartments spread over many blocks of low-rise buildings with large, grassy courtyards in their centers.

In 1903, Josef Hoffmann, another student of Otto Wagner’s, together with painter/architect Koloman Moser, founded the Wiener Werkstätte (Viennese Workshops), a cooperative center for the creation of crafts and the application of artistic principles to everyday objects. Klimt, Schiele, Kokoschka, and other noteworthy artists of the day collaborated to create useful and beautiful furniture, housewares, metalwork, textiles, jewelry, and designs on paper. (For years, New York’s Metropolitan Museum carried Wiener Werkstätte Christmas cards—maybe they still do.) The creators, like others of the period, considered their works as total, integrated works of art. Often, in addition to designing a building, they designed all its furnishings as well. Vienna’s Museum für Angewandte Kunst (Museum of Applied Arts), commonly called the MAK, has exhibits of the group’s work, though less jewelry was on display than at a special exhibit in New York’s Neue Galerie in 2008. The Leopold Museum’s fourth floor also houses Wiener Werkstätte works, as well as paintings of the period and a slide show of photographs of many period buildings.

A number of stores in present-day Vienna carry copies of the group’s work, including Josef Hoffmann’s stylish, functional furniture, such as his adjustable easy chair, which he called a Sitzmachine, or “sitting machine.” Check out the Galerie Ambiente at Lugeck 1-2 ; J. & L. Lobmeyr at 26 Kärtnerstrasse; Österreichische Werkstätten at 6 Kärtnerstrasse; and Backhausen at Schwarzenbergstrasse 10.

Countering much of the work of his contemporaries was Adolf Loos, who quarreled with the concept of “integrated artwork” and with the ornamentation beloved by some of the other artists. One of his first major buildings, from 1911-12, was the “Loos House” on Michaelerplatz. The simple, unornamented façade, directly in front of the entrance to the Hofburg, so infuriated Archduke Franz Ferdinand (whose assassination a few years later was to set off World War I) that the prince swore never to use that entrance again. Construction of the building was suspended until Loos agreed to install flower boxes on the façade. Today the building serves as a bank; the interior, with its dark wood and metal trim, is accessible during business hours.

More buildings by Loos can readily be seen in other parts of the downtown. Just off the Kärntnerstrasse, the main shopping street, in a little street called the Kärntnerdurchgang, is his American Bar (AKA Loos Bar), a tiny, stylish bar with an American flag façade and sleek marble and wood interior. A bookshop, Manz, is at Kohlmarkt 16. At Graben 13 is Knize, a men’s store; and in the middle of the Graben, a wide street, is Loos’s Jugendstil-style public toilet! (Go down the stairs.) The Café Museum, at Operngasse 7, has been restored, interior included, to the way Loos designed it in 1899. A popular hangout with artists and students of the Secession period, it was nicknamed “Café Nihilism.” With its clean lines and Thonet bentwood chairs, it’s still an appealing place for a coffee and Strudel.

I’m giving short shrift to many other significant artists of the period, especially Joseph Olbrich, who designed the beautiful Secession Building, one of the most significant structures of the Jugendstil movement, as well as many others; and Koloman Moser, painter, architect, co-founder of the Wiener Werkstätte, and designer of many covers for the Secession’s magazine, Ver Sacrum. Many of his paintings can be seen in the Leopold Museum, and the MAK has examples of his furniture and other work. Oskar Kokoschka—who survived until 1980—lived in Vienna from 1906 to 1915, associating with Klimt and Loos, and designed many postcards for the Wiener Werkstätte in addition to his paintings.

The glory period of Vienna’s turn-of-the century artistic blossoming came to a halt in stages. The deaths in 1918 of four towering figures—Klimt and Schiele (both in the influenza epidemic), Otto Wagner, and Koloman Moser—put a sudden end to the work of four of the period’s greatest artists. The Wiener Werkstätte dissolved in 1932 because of financial problems. Modernism became prominent, and then World War II put a period to everything.

But as you walk around Vienna, the works of these outstanding artists and architects are all around you. You have to keep looking up and peering in—you’re sure to spot buildings, perhaps by anonymous architects of the period, perhaps by one of the greats. I almost missed seeing Wagner’s Majolica House and the adjacent apartment house also designed by him because I was so engrossed in examining the Lederhosen and other goodies at the flea market right next door. Look up and you might find Oskar Laske’s Engel Apotheke at 1 Bognergasse, with its mosaic angels flanking the door; or the lovely buildings on the Fleischmarkt (where you might also see the house where Billy Wilder once lived). At Bognergasse 5 is the restaurant Zum Schwarzen Kameel; poke your head inside and take in the turn-of-the-century décor (and maybe pick up a tiny, delicious sandwich). Exactly next door to the building where I lived long ago while studying in Vienna is an apartment building by Otto Wagner (40 Neustiftgasse), and another one by him next door to that. I was never aware of them back in the day.

On my next visit, I’ll make it out to Wagner’s church at Steinhof, a magnificent structure on the grounds of a mental hospital, accessible only on Sundays and by appointment, and the villas that Wagner built in the same neighborhood. And who knows what else I’ll find.

Some books about the period that I found useful are:

Borsi, Franco and Godoli, Ezio: Vienna 1900. A beautiful hard-cover book with many pictures. Probably out of print, but worth looking for.

Toman, Rolf, editor: Vienna: Art and Architecture. Covers the subject from antiquity to the present day. Wonderful pictures, but the paperback edition has microscopic print. Try for the hardback edition.

The Vienna Tourist Board (www.vienna.info) publishes a handy pamphlet entitled Architecture from Art Nouveau to the Present with lists of buildings, addresses, and maps. The Tourist Board is generally extremely generous with informational materials, maps, brochures, etc.

Photos and Text by Renata Polt