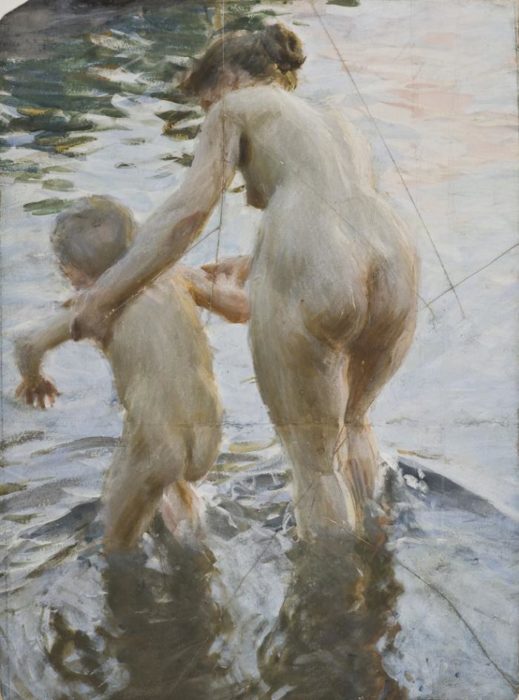 Swedish master Anders Zorn (1860-1920) may be the world’s finest under-appreciated artist. Unlike many renowned artists, Zorn’s heyday occurred during his lifetime. At 29, Zorn was made Chevalier of the Légion d’honneur, the highest decoration in France at the World Exhibition in Paris in 1889. These days he remains celebrated in Sweden, although his works are owned by major museums (see list below) and he has been nearly forgotten elsewhere.

Referred to as the “Swedish Impressionist” in his day, Zorn was much in demand for society portraits and was as popular as John Singer Sargent (1856–1925). He traveled to the United States seven times, painting portraits of the rich and famous, including three U.S. presidents, William H. Taft, Theodore Roosevelt and Grover Cleveland. Don’t miss Grover Cleveland’s portrait, as well as those of Isabella Stewart Gardner, operatic baritone Jean-Baptiste Faure, and Cornelius Vanderbilt’s grandson, Clarence Barker. Zorn’s self-portrait, one of his last works, is a standout.

Zorn is also admired for his plein air nudes and water scenes reminiscent of Monet and Renoir. There is a delicate eroticism to his paintings of nude women. Looking closely at his water scenes (mainly painted in watercolor) one can see his quick brushstrokes of green, yellow, red and blue, which blend to create a blur of water.

Born in Mora, a small Swedish town, Zorn began his studies at the Royal Swedish Academy of Fine Arts in Stockholm at age 15. He soon was commissioned to paint portraits in Stockholm. His future wife, Emma Lamm, came from a wealthy family with strong cultural interests. The couple secretly became engaged while they waited for Zorn’s career to be able to support them. They married in 1885 and lived abroad for the next eleven years.

Perhaps his desire to support himself and his wife in comfort dictated his career’s direction. Zorn’s works on exhibit are skilled and appealing. His portraits validate his talent, as do the nudes en plein air and the watercolors painted during his travels to England, Germany, Spain, Algiers, Venice and Constantinople. He showed his work at the staid, conventional Salon de Paris, never at the avant-garde Impressionist exhibitions. As an admirer of Édouard Manet (1832-1883), Zorn also exhibited his work at the Salon de Paris.

In 1887, Zorn began to paint in oil. Some of his paintings depicting rustic life and local customs, particularly “The Old Rinse Shed,” are appealing and distinctive. Zorn also learned the art of etching, which was enjoying a renaissance at the time. Rembrandt was his inspiration, and Zorn collected Rembrandt etchings. He eventually produced about 300 small-edition etchings that were rapidly purchased by art collectors.

In 1896, Zorn and Emma returned to Mora, where Zorn spent his last years He acquired a vacant lot in the Swedish countryside and moved a small wooden house there. Emma and Anders Zorn left their fortune and possessions to the Swedish State. Emma, who succeeded her husband by twenty years, started The Zorn Collections (Zornsamlingarna), which now comprise the museum Emma had built, the house in Mora, as well as an open-air museum of forty historic timber buildings preserved and brought to the site by Anders Zorn.