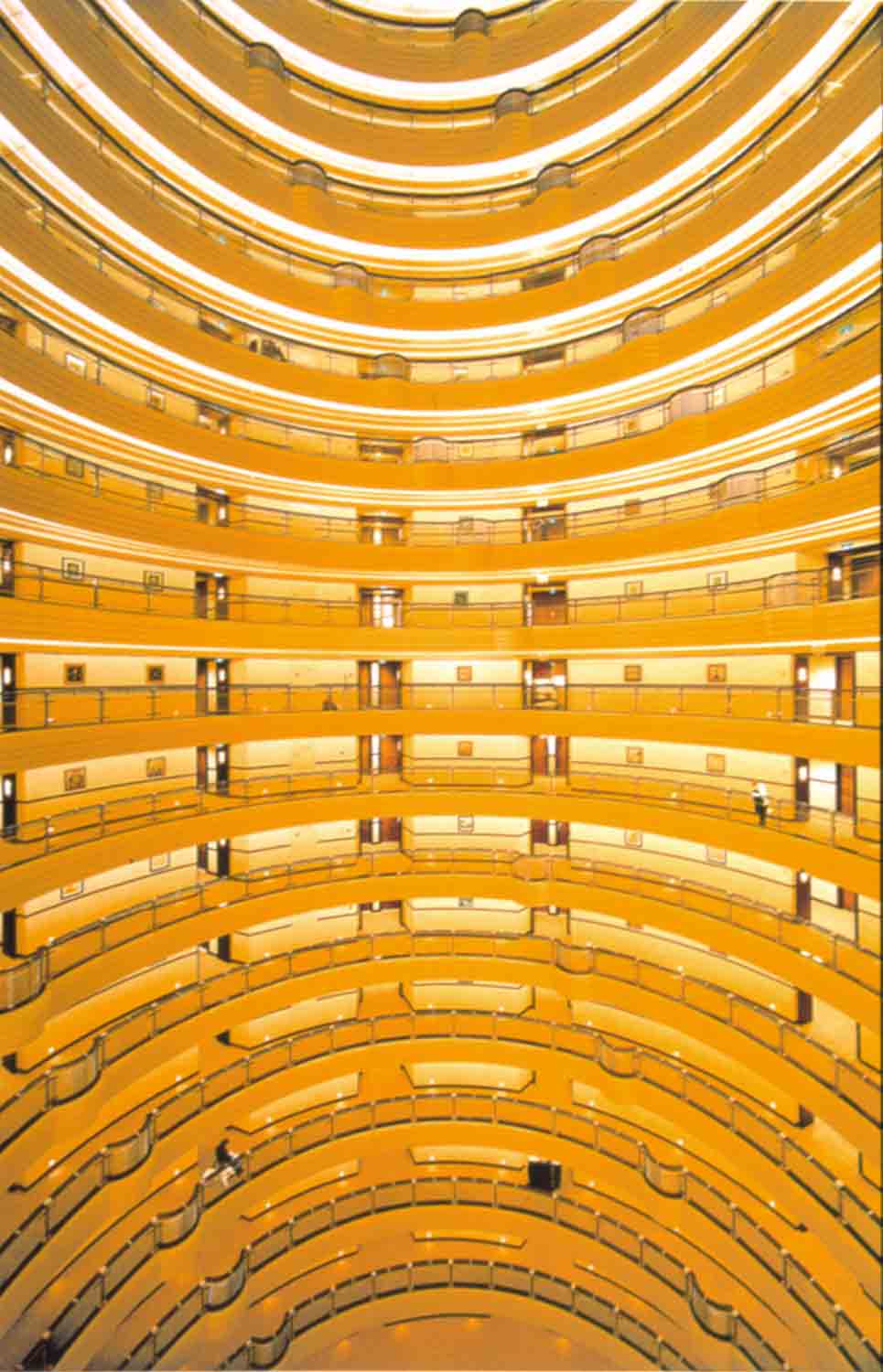 Gursky is big. His photographs, more often than not, are very big–99 Cent, pictured at the left, is nearly seven by twelve feet. Auction prices for his work, too, have quickly gotten very big–well into six figures. And his presence in the press is big, too, for this work makes a strong impression. Walking into the current Gursky retrospective is a "Wow!" experience. Size alone, of course, does not accomplish that. These photos are fascinating to look at, thought-provoking and aesthetically superb, seductively beautiful in and of themselves.

Both Gursky’s father and grandfather were successful commercial photographers and Gursky often uses the bright colors and visual language of advertising, but he moved first in a different direction, studying at Dusseldorf’s Kunstakademie under Bernd and Hilla Becher, minimalist photographers more interested in photography as impersonal, objective documentation than as a more expressive art form. Before long, though, Gursky turned to color (the Bechers work only in black and white) and expanded the range of his subject matter.

His viewpoint became that of an observer unfamiliar with the territory observed; pictures, such as Ratingen Swimming Pool, peer down upon the scene from above. Gursky is interested in crowds of people and he’s photographed them in such diverse situations as stock exchanges, rock concerts, and ski slopes. In crowds, people lose their individuality and it is the pattern of the agglomerated whole that becomes the focus, both figuratively and metaphorically. The scale of Gursky’s work enables him to capture that totality while retaining the images of the individuals of which it is made up. From across the room Chicago Board of Trade is an abstraction of color and pattern; close up, the faces and expressions and activities of the individuals are clearly observed. The place of the individual within society is the central theme of these works.

The theme expands even further when the idea of the millions targeted by mass media is superimposed on the crowd physically present. Klitschko, an astounding work (about seven by nine feet) captures a large arena where a boxing match is presumably about to happen. High above the ring are large television monitors. One of the monitors pictures, not the ring, but the media booth which can be seen to the side below. Gursky has digitally manipulated his print to get this effect; it emphasizes the media presence and, by implication, the vast audience of unseen viewers.

The artist, then, has moved some substantial distance from his minimalist black-and-white documentarian teachers. Other pictures, too, are digitally altered and the viewer cannot ever be sure which prints were and which were not. Gursky’s freedom to play with photographic imagery should not, at this stage of the game, be an issue. He is, after all, an artist, not a journalist.

One imagines that the Bechers might disapprove of such technique. The Montparnasse apartment block was simply too large for one photo to capture; it is two exposures, digitally seamed into one–actually the first time that Gursky used digital intervention. He seems fascinated by the architecture that humans create and the subsequent place of humans within that architecture. The Bauhaus ideal of modern architecture has here resulted in a high density of residents; a beehive analogy springs to mind. Again, from a distance, Gursky finds the stunning patterning of the buildings which has a beauty all its own; get close up and there are individual people and furniture and and lamps and plants clearly visible inside those windows. The same principle applies to Shanghai, a grand hotel interior, assembled from four negatives, with just a few people observed on the balconies.

Gursky also does landscape, with seemingly ironic reference to German Romanticism (Caspar David Friedrich) in Angler, which, nonetheless, continues the theme of the isolated individual, here within a lush landscape. Rhein II, a photograph of the river has no figures at all, but is a study in textures (footpath, grass banks, water, cloudy gray sky) in near perfect horizontal striations. In actuality, a factory on the far bank has been digitally removed.

This exhibit originated at New York’s Museum of Modern Art and has made other stops before its final landing in San Francisco. Gursky has added two photographs for the San Francisco show. Love Parade, like the May Day series, is a crowd scene from above, a merge of five exposures, taken at the annual Berlin street festival. The surprise here is that Gursky printed it in a much smaller size than he’s been working in recently and its impact seems correspondingly reduced.Untitled XIIIis a nine foot high photograph of a garbage dump in Mexico, some shanties seen in mid-distance, pieces of trash blowing about in the air. It’s hard to get past the starkly literal landscape of Untitled XIII. Here Gursky displays the bleak view, unameliorated by the seductive elegance of the other works exhibited.It’s as if he were saying that existential angst among the well-fed is one thing, but desecration of the planet can’t be made pretty.