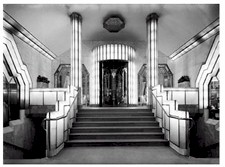 Not until the 1960’s was the term "Art Deco" coined to describe the style that swept the world in the booming 1920’s, continuing on into the Depression until the mid-1930’s. While some painters (Leger, Lempicka) and sculptors (Brancusi) both inspired Art Deco and were influenced by similar sources and ideas, this was primarily a decorative style, one expressed in architecture, interiors, furnishings, housewares, fashion, and film. Preceded by turn-of-the-century Art Nouveau, Art Deco rejected the elaborate, rococo look of its forebear, instead reaching for a simplified, sleek, streamlined look that reflected the advancing mechanization of the age and an optimistic world view characterized by progress, speed, and glamour. One is hard-pressed to find a dark side to Art Deco.

The Victoria and Albert Museum in London has organized a major survey of Art Deco, comprising a dazzling array of some 300 objects, ranging from an elegant Erik Magnussen silver coffee service with a Cubist look to the iconic Brancusi "Bird in Space," from an evocation of the Ruhlmann rooms at the 1925 Paris Exposition to an enameled, silvered bronze clock by John Goulden that is laden with the ziggurats and geometrics typical of the style.

The exhibit makes a valiant try at thorough documentation, including stylistic sources (African, East Asian, Egyptian, Meso-American), the abstraction and fragmentation of Cubism, and the distinctive earlier styles of various nationalities, such as Biedermeir in Germany and Empire in France. The all-inclusive strategy succeeds as a broad survey, but leaves some feeling of having skimmed over highlights, rather than plumbing in depth as a more narrowly focused theme might have done. Still, there are enough treasures of high quality on display that it seems thankless to carp on what might have been rather than focusing on the pleasures of what is to be had.

The exhibit gives substantial space to the Exposition Interrnationale des Arts Decoratifs et Industriels Modernes, held in Paris in 1925, a defining moment for the style. Indeed, it was from the name of the Exposition that the term "Art Deco" was later coined.

A centerpiece of the exhibit is a partial reconstruction of the entry to the Strand Hotel in London from 1930-31. Centered by a revolving door, the design is pleasingly symmetrical, but it is the extensive use of backlit, translucent molded glass, along with chromed steel, mirror glass, and pink marble that create a sense of contemporary glitz and grandeur: What glamorous movie star might be about to make an entrance down those stairs? (How nice it might have been if the installation had a room of its own; it seems a bit thrown-in with the objects around it which detract from the overall impression.) Nearby are a selection of evening gowns from the period by Chanel, Lanvin, and (the most elegant on display) Jean Patou. The latter’s sequined crepe is a reminder of what haute couture could be at its accomplished and complex best.

It’s entirely appropriate to have a tribute to American expatriate super-star Josephine Baker, whose presence recalls the Continental fascination of the time with the exotic in general and Black African culture in particular. A film of Baker dancing topless conveys a sense of the woman’s magnetism and she does introduce tribal-like movements into her Charleston. In another section there are clips from Hollywood films of the day which helped to popularize the look of Deco through the vast audience that they reached. Films like Grand Hotel and Busby Berkely’s 42nd Street epitomized the escapist glamour of the day, a sense of luxury that seemed further out of reach as the Depression took hold. And the economic reality of the Depression did ultimately shift the focus of Art Deco from the sumptuous materials of luxury (exotic woods, ivory) to mass produced objects made of the new plastics.

Only one work in the exhibit gives some sense that, perhaps, there was a dark side to all this galloping optimism. A 1930 painting by Fortunato Depero, included as an example of the Italian Futurists, is an homage to New York, showing a maze of stairways, tunnels, pipes (a la Leger), the Roxy Theater (an Art Deco movie palace), but dominated by a forest of sleek skyscrapers. The skyscrapers, though, are askew, angled this way and that, suggesting a confusing, perhaps oppressive, side to all this glittering modernity. It’s a refreshing moment of reality in this tribute to sensual, visual delights that are all about style and not much about the lives lived within it.