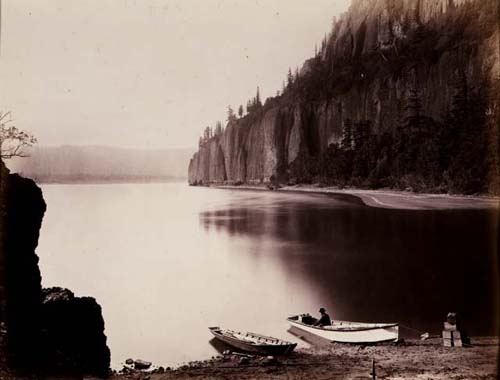 It may come as news to Ansel Adams fans that a photographer working 100 years earlier took a series of photographs of Yosemite Valley that surpass Adams&#146; own work there in immediacy, composition, and lushness of detail. It may even come as a shock that the man who took these pictures worked with only a minimal photographic heritage to draw on, and that he did his work while suspended in an idiosyncratic nexus of art and commerce.

In 1851 Carleton Watkins left his native New York to join the hordes pouring into California to take part in the Gold Rush. Settling first in Sacramento and later in San Francisco, he worked at odd jobs until one day a daguerrotypist friend asked him to fill in for an absent employee. Watkins took to the work and soon opened his own studio, manufacturing outdoor photographs for land-dispute cases and mining companies. Thus began a remarkable and, in our time, an almost wholly unknown artistic career.

Thanks to Douglas R. Nickle, associate curator of photography at the San Francisco Museum of Modern Art, Watkins&#146; name has been rescued from anonymity in Carleton Watkins: The Art of Perception, an exhibit of more than 150 mammoth-plate photographs and panoramic pictures taken during his travels through the West. In addition, the exhibit employs computer terminals so that, with the aid of new stereo-imaging technology, some 200 of Watkins&#146; stereoscopic cards can be seen in the most vivid 3-D imaginable. (One shot, for instance, makes it seem that an outcropping of rock is resting in the viewer&#146;s lap.)

Watkins was, in Nickle&#146;s phrase, a "proto-Modernist," a man who brought to his art an energy and perception that were inflected by the technological advances of his age. Uninterested in portraiture and eschewing the narrative and purely documentary effects of his contemporaries, Watkins imbued his landscapes &#150; even those with such unpromising subjects as mining tracts &#150; with a startlingly visceral quality that depended in equal parts on composition and camera-placement.

He clearly relished the play of lines he found outdoors, and many of his pictures can be viewed as nearly abstract meditations on the shapes and relationships of tree stumps, railroad tracks, waterfalls, fence posts, boulders, roads, and the like. Multnomah Falls, Oregon, an 1867 work, shows two sections of a waterfall symmetrically divided and framed by a group of trees in a pattern so harmonious that its effect is as much musical as visual. Other pieces, such as Cape Horn Near Celilo, in which a stretch of desolate flatland is interrupted by a dark cliff rising straight out of the ground, seem like templates for the evocative compositions of L&#146;Avventura.

These aesthetic triumphs were enough to secure Watkins&#146; reputation in the arts, but his achievement was a multi-layered one that extended into the natural sciences, technology, and commerce. Whites had found their way into Yosemite Valley only a few years before Watkins arrived in California, and descriptions of its ethereal beauty and vast spaces were greeted with derision and disbelief back East. Watkins was well aware of this skepticism, so he caused to be constructed a mammoth-plate camera capable of taking 18" x 22" plates &#150; large enough to render the size of the valley&#146;s mountains and trees &#150; and in 1861 he set off on the 24-hour journey to Yosemite with the intention, as it were, of proving that such a place existed.

The ensuing photos created a sensation when they were exhibited in New York (Emerson said that Watkins&#146; photo of a giant sequoia "made the tree possible" for him), and they even contributed to some important environmental legislation. Lumber companies were already chipping away at the valley&#146;s edges, so Senator John Conness used Watkins&#146; photographs to convince Congress and then Abraham Lincoln to enact the Yosemite Bill in 1864, securing the area from the encroachments of developers.

Watkins visited Yosemite again in 1865 and 1866, taking photographs on behalf of the California State Geological Survey. Geologists of the time were beginning to theorize that Ice Age glaciers, rather than erosion, had caused the valley&#146;s formation, and so Watkins obligingly trained his lenses on the sheer granite cliffs that showed evidence of glaciation. He also dispensed with orienting foregrounds in many of his pictures of this period, moving his tripod to the very edge of the precipices he shot from so that the viewer feels pitched into the high spaces above the valley.

Later travels took him to Arizona and the Pacific Northwest, and his photographs in those locations often contain the same immediacy found in the Yosemite series even when they were done as contract work for mining companies.

Watkins was a lousy businessman, and what he could not do to hurt himself, Fate did for him with Sophoclean gusto. The Panic of 1875 ruined him financially and caused creditors to seize all of his negatives and equipment. By 1895, he and his family were living in an abandoned boxcar. The Great Earthquake and Fire of 1906 razed his studio and destroyed his remaining work just as it was about to be archived by Stanford University. Blind, penniless, and forgotten, Watkins spent the last six years of his life in a state home for the insane where he died in 1916.

But Carleton Watkins: The Art of Perception has rescued Watkins from the ranks of the forgotten, and made available once again the work of a vital American artist.