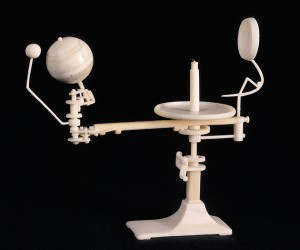 Charles LeDray, an autodidact, is a sculptor who works in miniature, with a degree of precision and skill that makes the word "awesome" meaningful again. He works in a particular range of materials: sewing cloth, carving human bone, and shaping porcelain. Often he will assemble multiple pieces into carefully arranged groupings, such as workworkworkworkwork, which consists of 588 objects including miniature garments, books, shoes, and magazines, aligned in a long row. Milk and Honey consists of 2,000 white glazed porcelain vessels (jugs, vases, bowls, compotes, platters, ewers) perfectly rendered in doll house scale and arranged on six glass shelves in a tall vitrine. In the case of both works, attention first is drawn to the extraordinary detail LeDray accomplishes with what can only be painstakingly accomplished craftsmanship. Then the perception of the assembled Lilliputian whole takes over. In the former there is a rather literal suggestion of the sort of occasional street sale seen in seamier urban neighborhoods; the piece takes on a hint of quiet desperation. Milk and Honey is less easily read, more mysterious. It’s title suggests comfort, but the piece itself isn’t warm. Rather the whiteness and the pattern of the many pieces is cool, and, as a totality, the form becomes an abstraction.

The exhibit includes several incarnations of one of LeDray’s repeated images–teddy bears. One piece, listed as Untitled (Broken bear), is made of white leather and cotton stitched together into the dismembered parts (head, torso, limbs) of the stuffed animal–obviously something damaged, fragmented, yet retaining its identity and projecting a sense of innocence along with its malaise. Untitled(bear in a corset box), on the other hand is a spiffy-looking stuffed animal standing vertically and sporting a Byronesque bow around his neck. His size indicates that he could be stored in the accompanying brassiere box, along with his tiny French suitcase and a velvet hat. The impression is quietly surreal, the elegance of the accessories in contrast with the worn and ignoble container in which all are presumed to reside.

Untitled/Mattress is a perfectly built, utterly realistic mattress about 15 inches long.It’s lumpy, discolored, stained, and burnt–a record of long use, of seedy end-of-life condition. It exudes an almost tangible tension between the perfectly executed craftsmanship of the piece and the imperfect reality that it portrays.

There are a number of pieces that are carved from human bone. Of course, if observed without wall labels, these pieces look like and would be assumed to be of ivory. Knowing that they have been carved from human bone adds both a degree of the macabre and a suggestion of mortality. In some cases that feeling contrasts with the somewhat banal objects represented–a washstand, a door. But then LeDray offersTellurian, an intricately carved model of a scientific apparatus that shows how the movement of the earth on its axis and around the sun causes day and night and the seasons. Here the astronomical content is on a grand scale; there’s pointed irony in a miniature model of another model of something of a much higher order of magnitude.

As in workworkworkworkwork, LeDray uses clothing perhaps more than any other single image. Torn Suit is hung on a perfectly miniaturized hanger, complete with striped shirt and tie. But at just under breast-pocket level, the suit has been torn away, leaving frayed and ragged edges of the jacket, tie, shirt, and trousers. World’s Greatest Dad, in contrast, is whole and fresh looking, commenting on a certain mindset with its baseball cap, camouflage pants, and jock jacket adorned with logos for Camels, Desert Storm, Rambo, and the like.

Two works, both called Village People, are long horizontal rows of miniature hats. One, anchored toward the center by an Indian headdress, includes everything from a fedora to a fez, a babushka to a beret. The later piece veers into a more theatrical, even flamboyant mood with a sombrero, a viking hat, a clown’s hat, Santa’s cap, a tam-o’-shanter and more.

So there is occasional joy in LeDray’s work, but more often wounded teddy bears, tattered clothing, and stained mattressesevoke a sense of sadness and loss, of the brokenness of lives. Having caught the viewer’s attention with his astounding craft, LeDray’s then lets his objects speak for themselves. While the objects are readily identifiable, their meanings are more subtle than the easy first-glance response. There is a great deal of emotion packed into these obsessively made works. As the craftsmanship is utterly controlled, so, too, the emotion is tightly contained, waiting to be tapped by the interested viewer.