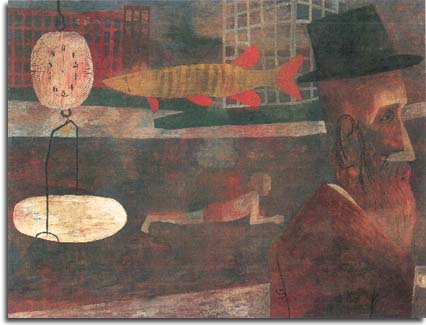 Tempera on board; Collection of the Montgomery Museum of Fine Arts, Montgomery, Alabama.

Approximately 50 works, including paintings, photographs and theatrical masks have been gathered together for the first time in almost a quarter of a century to provide an illuminating overview of Ben Shahn’s social realist oevre. The exhibit concentrates on Mr. Shahn’s later years, 1936-1965. Workingin a narrative tradition, the painter created allegorical works depicting the social conditions of the common man of his time, often embodying the horrors and traumas of life for the "outsider" in the mid 20th Century.

Included in this exhibit are paintings reflecting Shahn’s youth, such as New York, a dream-like composition evoking a pungent nostalgia. A series of ghostly paintings, including Italian Landscape, depict the emptiness and waste of war through the use large flatly paintedsurfaces and colors that appear to be both bright and muted at the same time. A stunning jewel to behold is Beatitude, a painting of tranquil beauty and muted serenity.

The small exhibit concludes with a selection of paintings from the Lucky Dragon series. Based on a the experiences of a Japanese boat crew exposed to atomic fallout from a hydrogen bomb test in the Pacific, these vivid paintings, in beautiful and painfully bright hues, portray the events allegorically, incorporating traditional Japanese symbology. I Never Dared to Dream is the apogee of these paintings.