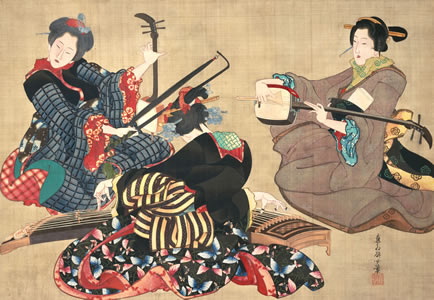 “Living only for the moment, turning our full attention to the pleasures of the moon, the snow, the cherry blossoms and the maple leaves; singing songs, drinking wine, diverting ourselves in just floating, floating: caring not a whit for the pauperism staring us in the face, refusing to be disheartened, like a gourd floating along with the river current: this is what we call the floating world…”

The Japanese writer Asai Ryoi wrote this definition of ukiyo-e, or the “floating world” in about 1661. Call it refined hedonism, or determined aestheticism, the upper-classes of Japan cultivated this view from the late 17th to the mid 19th centuries. In the West, we know the practice and its exquisite realization in art primarily from woodblock prints by masters such as Hokusai, Utamaro, and Hiroshige.

But artists also expressed the philosophy in paintings, less well known because fragile and not mass-produced. The largest collection of these works is owned by Boston’s Museum of Fine Arts, the donation of William Sturgis Bigelow (1850-1926), a New England surgeon who spent some seven years traveling in Japan, collecting art, and eventually converting to Buddhism. Returning to America, Bigelow donated his entire collection of ukiyo-e to the MFA, making their holdings the world’s largest. And there they stayed locked up for decades, not even catalogued until the 1990s.

Now in the last stop on a tour that has included museums in Japan, Canada, and Boston, Drama and Desire: Japanese Paintings from the Floating World, 1690-1850, is on view at San Francisco’s Asian Art Museum (until May 4, 2008), after which it will go back into storage, probably for more decades.

A bit of historical background. The city of Edo (modern Tokyo) was founded in the early 17th century, and though Kyoto was the country’s nominal capital, Edo soon became its major political and commercial center; within 100 years, it had over one million inhabitants. The upper classes—the emperor, his court, and the samurai—lived in the higher, hilly regions—the High City—and the working classes in the flatlands—the Low City.

On the northern edge of the city, a separate, gated district named Yoshiwara was established to house the many prostitutes (prostitution was legalized in the 1100s and remained legal until the 1950s). This “pleasure quarter,” however, was more than a red light district: it also housed theaters for Kabuki performances, teahouses, as well as, of course, quarters for concubines (licensed prostitutes) and geisha (entertainers).

The concept of the “floating world,” based in part on the Buddhist doctrine of the transience of all things, embraced not only the goings-on in the pleasure quarter but also the enjoyment of nature and everyday life. Since none of it could last, why not enjoy it now? Carpe diem. The art that would celebrate the concept became popular in the late 17th century, providing even common people, by way of woodblock prints, with views of the high life (fashionable courtesans, popular kabuki actors, elegant interiors) as well as everyday pleasurable pastimes—contemplating cherry blossoms or snow or autumn leaves, outings by the Sumida River, celebrating holiday customs. There are also parodies of classical subjects, legends, and Buddhist symbolism, as well as animals, both real and mythical. And then there are erotic paintings, but more on them later.

The paintings were executed on screens—often in multiple panels—hanging scrolls, hand scrolls (rolled up and smaller in size), even large paper lanterns. They were commissioned by wealthy merchants and military aristocrats. And because they have been stored for such a long time, the works are almost pristine in quality, with vivid colors and intact surfaces. Lighting in the museum’s galleries is low to protect them.

The exhibition is divided into three sections: Enjoyments of the Four Seasons; Dance, Drama, and Kabuki Theater; and The Pleasure Quarters, Courtesans, and Geisha. It can take a long time to make one’s way through the galleries, since many of the paintings are highly detailed. “The Japanese artists wanted to reveal as much information as possible, while yet letting you discover more and more detail by yourself,” says Anne Nishimura Morse, Curator of Japanese Art of Boston’s Museum of Fine Arts.

For example, Hishikawa Moronobu’s “Scenes from the Nakamura Kabuki Theater and the Yoshiwara Pleasure Quarter,” a pair of six-panel screens with a gold background, depicts an array of activities, from a procession of courtesans and their attendants en route to meet clients, to a low-class brothel where prostitutes await clients from behind lattice-work screens, to detailed scenes of the theater, which, with its open roof and divided galleries, somewhat resembles an Elizabethan theater. This and other paintings show barrels used to store water because of the city’s frequent, devastating fires. Like many of the works, these scrolls provide valuable glimpses into the society of the time.

Other paintings show more intimate scenes. “Li Bai Admiring a Waterfall,” by Katsushika Hokusai, famous for his woodblock prints, shows a pair of tiny figures looking up at a monumental waterfall, its vertical lines dominating the composition. Hokusai is also the creator of two lanterns, “Dragon and Tiger” and “Dragon and Snake.” Painted on paper and used to mark the entrance to a shrine or a house in the pleasure quarter, these articles were not meant to be preserved, and few survive.

Hokusai’s daughter Katsushika Oi was one of the few women painters. Her “Three Women Playing Musical Instruments” depicts a geisha, an apprentice courtesan, and a young townswoman playing a trio of stringed instruments.

Many other works portray the lives of women or families. In “Courtesans in Front of a Teahouse,” by Ippitsusai Buncho, two courtesans and a geisha occupy some leisure time both indoors and out during winter. “Picking Young Herbs beneath Cherry Blossoms,” by Mizuno Rocho, two women and a child are enjoying themselves on a spring day, the cherry blossoms falling on them like snow. Like figures in other paintings, the young woman carries a pipe and a tobacco pouch. Tobacco was introduced to Japan by Dutch traders and was taken up by all levels of society, as people assumed that it was good for their health.

The styles of dress and coiffure depicted in the paintings are significant, and clear explanations are provided by museum’s descriptive panels. Courtesans, for example, dressed in the most elaborate kimono, with heavy over-kimono and enormous obi (sashes) tied in front. Their hairstyles also were distinct from those of geisha or ordinary women, using combs and hairpins and with the hair divided into several portions. Unmarried woman wore long-sleeved kimono, while married women’s sleeves were shorter. Kimono fabrics were sumptuous, often dyed using stencils, tie-dyeing, and paste-resist dyeing.

Poems are included in several paintings. One, written above a picture of an beautifully dressed courtesan and two of her apprentices, reads

The fine cherry trees in the

Deep mountains count for nothing.”

In another painting, a priest says to a prostitute:

Although it is hard

To renounce this world of ours,

As a transient home,

Surely you would not begrudge

“Just because I knew

you renounced the world, I thought

that I should warn you

not to let your heart linger

Some paintings illuminate the life of the theater. “Nakamura Utaemon III in Seven Roles” portrays the most popular Kabuki actor of the early 19th century as a fox, a villain, a young man, and a young woman (all roles were acted by men). There are also several theater signboards, framed paper works advertising a theater’s program and exhibited outside the theater like a poster.

So much for drama. Now to desire. Exhibited for perhaps the first time anywhere is a group of “spring pictures” (shunga). These works, painted not on screens or long scrolls but on more intimate hand scrolls or books, were created by almost all artists working during the period, either for themselves or on commission. However, they were unsigned.

Exhibited at the Asian Museum are several hand scrolls, each depicting a series of erotic encounters in graphic (and comically exaggerated) detail. The participants are fully clothed except for the significant body parts. The paintings, which were brought into the United States only after special permission was granted by President Theodore Roosevelt, were catalogued separately at the Museum of Fine Arts, and, until 1995, only male, married staff members were allowed to see them. Some of the other venues that have exhibited Drama and Desire have not included these scrolls. And because they have so rarely been shown, their colors are especially bright and clear.

Drama and Desire is an extraordinary exhibition, not only for the sheer beauty of its works but also because it makes us see clichés of Japanese art—cherry blossoms, geisha, Kabuki theater, etc.—in a new light.

In connection with the exhibit, there will be a fashion show, “Ukiyo-e & Edo Period Culture: A Kimono Fashion Show featuring Tomita Nobuaki” on April 5th at 1:30 p.m.. The charge, $5 for members and $17 general, includes museum admission.