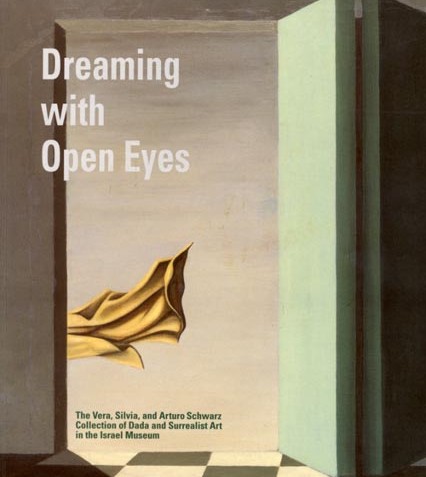 If abstraction is at the heart of modernism, then Dadaism and Surrealism are central to its intellect.

Dada was a response by artists and poets to the horrors of World War I. With an anti-art attitude (the name, literally "rocking horse," was selected randomly from a dictionary), the Dada movement mocked the rational and the conventional. Later, in the early 1920’s, AndreBreton, rejecting the nihilismof Dada, founded Surrealism which, influenced strongly by the work of Freud, explored the unconscious, in particular the world of dreaming and its attendant sexuality. The Surrealists advocated "automatic" writing and painting in which it was thought the artist’s unconscious would be revealed.

Arturo Schwarz is an art dealer, publisher, and scholar who counted among his friends Breton, Marcel Duchamp, and Man Ray, all prominent in these movements. Schwarz has gifted his collection of Dada and Surrealist art and ephemera to the Israel Museum which has mounted the exhibit Dreaming with Open Eyes, now traveling to San Francisco and Toronto.

Central to the exhibit is a complete collection of Duchamp’s Readymades. These thirteen works are replicas of the originals which were approved by the artist. The idea of replication would be anathema for traditional art, but for the anti-art Dadaists–and for art largely based on found objects–it makes perfect sense. A urinal, after all, is a urinal. It is the placement of the object on a pedestal in the context of an exhibit that give it its meaning as an artistic (or anti-artistic) statement. Also familiar here are the Bicycle Wheel mounted on a stool and the unadorned Bottle Dryer. When first exhibited, these objects were found to be unsettling, if not shocking; today that element has been lost due to familiarity and the pieces are mostly interesting as history.

The works that do retain contemporary impact are those where the artist’s hand (and mind) is felt, more readily seen in works by Man Ray such as L’Enigme d’Isidore Ducasse, a sewing machine wrapped in a blanket and tied with string. Thus an ordinary item becomes sculptural and acquires an air of mystery. Man Ray’s Cadeau is a flat-iron with nails embedded in its pressing surface, amusingly negating the purpose of the tool itself. A little irony goes a long way.

Similarly, Duchamp’s print (L.H.O.O.Q.) of the Mona Lisa on which he has pencilled a mustache and beard doesn’t have much resonance for a generation that has been subjected to a surfeit of graffiti. What was diverting then barely draws a grin today. On the other hand, a second Mona Lisa image without the graffito, entitled L.H.O.O.Q. Shaved and executed 24 years later, is a delightful drollery.

The painting, The Upper Side of the Sky, by Kay Sage, a detail of which was used for the poster for this exhibition, is an evocative example of Surrealism. Pictured is a checkered floor in a vacant room whose doors open to a horizonless sky and a modernistic structure of architectural elements. A large piece of fabric, a cloak perhaps, is seen billowing outside, but the edge of the wall cuts off that to which the cloak is attached. There is surely a suggestion of someone leaping and the overall painting is imbued with fantasy, mystery, and a powerful sense of isolation. Some years later Sage wrote this verse: "I have built an ivory tower of despair../I scream, I scream…/In my ivory tower." Somehow it doesn’t come as a surprise that the painter was a suicide.

Equally dramatic, if not as drastically morbid, is Remedios Varo’s Insomnia, in which heavy-lidded, disembodied eyes float through empty rooms, drawn toward a brightly lit candle that also attracts two exotically beautiful flying insects–moths of the imagination, if you will.

In some ways the spirit of the Surrealists is best caught by some of the many collages included in this exhibit. Collage seems a highly suitable technique for creating the odd and dream-like combinations of images that plumb the unconscious, though the deliberateness of the process suggests that it is not as improvisatory as the Surreal doctrine espouses. An untitled Joseph Cornell work superimposes a black and white image of a reclining female nude and a basket of breads on a colored fantasy landscape of river and castle. Another untitled collage, by Georges Hugnet, shows a couple from the back, sitting on the top of a dune and looking out to sea. A pair of colored eyes is superimposed on their backs, peering behind them to a partially unclad recumbent female figure holding a pair of leering red lips. Marcel Jean’s sculpture, The Specter of the Gardenia, covers a plaster head with black felt, with zippers across the eyes and a strip of celluloid film like a necklace around the neck, held by a paper clip.

A gallery of precursors to Dada and Surrealism is a useful adjunct that helps place these works in a longer term context. And publications, film and photography of the period are a positive addition to the mix. But some of the artists generally associated with Dada and Surrealism are barely represented in the exhibit. There is one large Miro and a couple of his prints, but they are not particularly fine examples of his work. Much maligned Dal� (some of whose earlier paintings hold up remarkably well) is represented by a single ink drawing. Others like Magritte and Klee are similarly underrepresented. But what is here to be seen is nonetheless a rich and remarkable contemporaneous collection of a diverse group of works that illuminate the variety of expression and thought in these important periods of twentieth century art and thought.