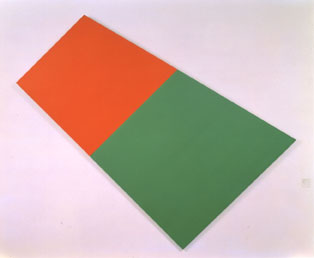 Ellsworth Kelly stands in the top tier of twentieth century American artists, but beyond the broad label of "modernist," he doesn’t fit easily into any one category. He’s a maverick who found his own way to express his vision in his art.

Celebrating its acquisition of 22 works by Kelly from his own collection, the San Francisco Museum of Modern Art has organized Ellsworth Kelly in San Francisco, an exhibit that augments the museum’s important collection with works borrowed from private collections throughout the Bay Area, allowing, if not the full depth of a retrospective, an instructive overview of the artist’s career.

One of the best known works isCite, which calls to mind both the optical effects of a Bridget Riley and the conceptual approach of a Sol Lewitt. There are surely points in common with those artists, but Kelly got to Cite via his own route. His technique was to find his imagery from observations of the world around him and then distill the imagery into abstractions where "form and color speak." In this case, the source of the image was a dream. Starting with painted horizontal brushstrokes on paper, Kelly cut up the original into equal-sized pieces and then rearranged them in a number of ways. Then he copied the result onto wooden panels which were rearranged yet again and then joined. The final product is visually a long way from its starting place, the image having been subjected to such random and repeated shuffling; certainly it has been subjected to the critical eye of its maker.

The result is an abstraction that is full of energy and movement, engaging the viewer in a palpably physical way. The painting dates from 1951–predating op, minimalist and conceptual art. At a time when the perceived center of the art world was shifting to New York and the breakthrough of Abstract Expressionism, Kelly was in Paris (1948-1954) and was influenced by the Paris School, Arp, and Brancusi. Another work from this period, Spectrum Colors Arranged by Chance, originated in an observation of broken reflections of light on water; while the final work might share the glint and shimmer of the original image, if the source weren’t revealed, it would not likely be guessed. This is an abstract work, again subjected to an arbitrary chance of arrangement, here pronouncedly enhanced by Kelly’s vivid colorations.

Over time, Kelly distilled his work into deceptively simpler compositions and grew them larger in scale. He used overlapping panels, as in Blue Relief with Black, and also left behind the standard square or rectangularly shaped canvas. Viewing these images online or in a photograph conveys no sense whatever of the experience of perceiving them installed in a gallery. As simple as they appear, they uncannily engage the viewer in an active visual experience. That is precisely what Kelly intends and, indeed, he suggests it is the unifying element and the key goal of his work–to keep an energy flowing between the work and the viewer.

Kelly’s use of color is also geared to energizing the contact between the work and the viewer, nowhere, perhaps, more than in the large-scaled Red Green. More than one observer of this painting immediately associates the skewed, side-by-side panels with the image of a tennis court and it certainly engages the eye in a back and forth movement. But it is the intensely saturated colors that make an even stronger physical impact. Further, the colors appear to affect the perception of the shapes–there’s a sense of give-and-take between them.

Kelly not only breaks the standard shape of a canvas, he starts to build his pieces in three-dimensional forms, blurring the line between sculpture and painting. He also expands the range of his materials to include wood and metals. A work that again has a surface simplicity, Curve in Relief II, is made of aluminum painted white. The overall rectangular shape (large, at over 11 feet wide) forms the background; its bottom half is raised for the width of the work, arching in a very gentle curve. It forms a lip at the top of the curve which reflects light up onto the background, creating a gently glowing effect which varies when seen from different angles. The viewer gets caught up in an almost game-like interaction. Under observation the simple turns out to be complex, the seemingly plain is revealed to be elegant and highly sophisticated.