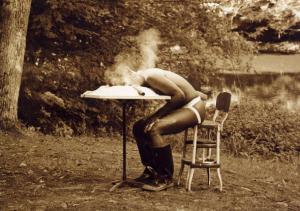 The first thing to confront visitors to the William Pope.L eRacism exhibit at the Portland Institute for Contemporary Arts is a wall containing 8 � by 11 inch pieces of graph paper, individually framed in standard black- with-gold document frames, and containing phrases beginning either with "BLACK PEOPLE ARE…" (48 pieces) or "WHITE PEOPLE ARE…" (three pieces).

It seems that WHITE PEOPLE ARE, at least in this installation, "my father," or "mind," or "the sun and what comes after," while the BLACK PEOPLE ARE: graphs run from the stereotypical "slick," to the poetic "bloody Kansas in a world without hope or rubbers."

This mid-career exhibit brings together sculpture, collage, video, web projects, wall installations and documentation of performance pieces from the last ten years in a survey that confronts and questions not only the categories of race, but also of food, economic status, and place.

What, for example, does one make of a reverse map of the continental United States entitled "Map of the World, 2003" made of shellacked frankfurters screwed onto a plywood background, dripping with petrified mayonnaise and cascading below geographically-reversed Florida and California into piles disgustingly similar to hardened dog excrement?

Pope.L tells exactly what to make of it on title card notes. It is, he says, the artist&#146;s view from "behind America, like the moment in The Wizard of Oz, when the man behind the curtain is revealed. The accumulated hot dogs create a swollen territory of crucified bodies (or penises, or turds) that speaks to issues of conspicuous consumption, dis-ease and disgust."

Perhaps it is a weakness of the exhibit that Pope.L so thoroughly explains his static installations&#151;for example, that he uses mayonnaise in his Broken Column, 2001 totems to call attention to the preservative chemicals used in food eaten by the poor, or that the onions painted half-white and half-black in Polis or The Garden or Human Nature in Action, 2002 are meant to show that onions swell, sprout, decay and collapse the same no matter their color.

As might be expected, it is the video documentation of 20 performances, dating back to the 1980s, that brings the exhibit to its peak. Here William Pope.L, sometimes reciting his poetry, sometimes not, confounds the viewer&#146;s expectations and sensibilities.

In A Negro Sleeps Beneath the Susquehanna, (1998), Pope.L recites on the banks of a stream, clad only in a loincloth looking suspiciously like a tailored disposable diaper, while balancing a one-legged table covered with a mound of white powder, to a perplexed, suburban-looking group of 30 or so white people, then slowly recedes down the stream carrying a cracked mirror on his back.

In Shopping Crawl, 2001 the artist, clad in a gray pinstriped suit, white shirt, purple tie, and brown desert boots, laboriously crawls along a street gutter holding a small green plastic container with a living white petunia.. He crawls&#151;using only his upper body, as if his legs and much of his torso were paralyzed–past children, bicyclists, and through a pile of squirming white maggots. Undoubtedly, he is largely ignored by bystanders because he is clearly being filmed, but a picaresque moment comes when two Black men approach him and his camera man, forcefully demanding that he get up out of the street. They want to know what a Black man is doing being filmed crawling through the streets in a suit, and Pope.L dissuades them from beating up his camera man by promising to have coffee with them later.