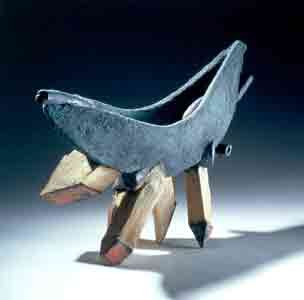 The vessel, according to the experts, is at the heart of all ceramics. Presumably from ancient beginnings when clay was first molded into jars to hold water, bowls to hold food, plates, cups, even a vase to hold flowers, the origins were utilitarian. Vessels had ritual uses, too, which would call for special decoration. Over time, the unique human aesthetic sensibility came into play in the making of vessels and the practical was enhanced and transformed by beauty of form and color and texture.

The Danes have a particularly long tradition of ceramic art. From the Kilns of Denmark, the first major exhibition of Danish ceramics in two decades, has begun an extensive international tour, premiering at the originating Museum of Arts and Design (formerly the American Crafts Museum) in New York. Consisting of 97 pieces by thirty leading Danish ceramicists, most of these pieces were created expressly for this exhibition.

The exhibit is ashowcase of extraordinary diversity of technique and style and an equally extraordinary uniformity of excellence in the works on display. Gerd Bloxham Zettersten&#146;s scholarly commentary in the handsome catalogue for the show suggests several reasons for the unique accomplishments of Danish ceramics&#151;from the historical context, including rich resources of clay and the a long and continuous tradition, to the Danish approach to the art which she characterizes as both pragmatic and highly analytic.

In an illuminating videotape that accompanies the exhibit, several of the artists were taped in their own studios, talking about their work. If one cumulative impression comes out of their statements, it is of intense dedication and patient experimentation with the techniques of forming and glazing and firing that permit each artist the realization of a unique vision.

To single out some, given the outstanding quality of all, seems almost unfair, so examples are merely an expression of personal taste here. Amongst those continuing with the recognizable vessel, Bente Hansen&#146;s work is notable. Meander Vase, a piece hand-built in stoneware, as seen from above, presents an undulating, irregular curved line, like that of a meandering river. The vessel is in a V-shape, joined at the juncture of its two arms by a precise U-curve which both anchors the piece and sets up a gentle tension between the regular and the irregular, the geometric and the serpentine. The exterior surface is a textured, uneven glaze, light and neutral in coloring, with the feel of old stone; the interior is dark. In contrast, Hansen&#146;s Reclining Vessel is all a matter of balance and imbalance, the elegant curve of its slug-like shape quite regular and smooth, resting lightly on its base. Here, the glaze is more assertive, predominantly a rich shade of blue, patterned in the bubbling of the glaze. After the first firing, Hansen filed down the bubbles and added highlights of white glaze before refiring with results of such precise patterning that it is hard to imagine it was achieved in the vagaries of the kiln.

Turi Heisselberg Pedersen makes architectural vessels of simple shape, also in stoneware; the unique matte brown glaze on one has such evenness and intensity of color that it suggests velvet. Martin Bodilsen Kaldahl has a series of vessels called Other Planes whose cylindrical shapes are interrupted by what might be described as truncated spouts. When he creates a horizontal stripe on one work, the stripe continues as if the surface were not interrupted by the spouts, an interplay that creates a tension between surface and decoration.

Alev Ebuzziya Siesbye, originally from Istanbul, makes large, thin-rimmed stoneware bowls in a rich turquoise blue with a thin line of gold just under the rim. Tapered at the base, these pieces have a deceptive lightness; they seem weightless, floating. That sort of lightness is more expected in the medium of porcelain. Works in porcelain by Bodil Manz (graphic, often geometric design both inside and outside of the vessels) explore the delicate translucency of the medium. She points out that the more highly fired and repeatedly fired, the more translucent these pieces get, but also the more brittle&#151;if over-fired, they will collapse. Jane Reumert&#146;s large porcelain vessels look like fragile eggshells from which might have emerged some fantastical prehistoric bird.

In works that stand out as completely different from everything around them, Michael Geersten throws earthenware cups, platters, and bowls on the wheel, then cuts them up in pieces and rebuilds them into sculptural forms, each colored in a different, solid colored, smooth and shiny glaze. This is a post-modern deconstructionist approach; the result is something like Fiesta-ware on acid. Malene Mullertz is the only one of these artists using the forms of open basketry translated to clay; thus her pieces use space as well as clay to define interior and exterior space. The ability to see through the vessel to its other side adds an entirely new dimension to that definition.

Among those who have wandered further from the vessel form, Nina Hole builds earthenware sculptures filled with humor and wit. Boat floats on strange irregular legs. Dancing Danish Church Towers is self-descriptive, a complex arrangement of architectural elements. Gerd Hiort Pedersen builds vertical sculptures of stoneware with irregular, textured vertical strips set at varying angles to a central core; the result is an abstracted tree.

The range of expression within the constraints of the medium of clay, as evidenced in this stunning exhibition, is a testament to the creativity and individuality of the artists. Variations in the types of clay, the glazes, and the firing offer many choices within the parameters of the materials and processes, but it is the vision of the artists which is unbounded and infinitely varied.

$2.71 (as of January 25, 2021 - More infoProduct prices and availability are accurate as of the date/time indicated and are subject to change. Any price and availability information displayed on [relevant Amazon Site(s), as applicable] at the time of purchase will apply to the purchase of this product.)

(13114)
$4.18 (as of January 25, 2021 - More infoProduct prices and availability are accurate as of the date/time indicated and are subject to change. Any price and availability information displayed on [relevant Amazon Site(s), as applicable] at the time of purchase will apply to the purchase of this product.)

(6300)
$13.59 (as of January 25, 2021 - More infoProduct prices and availability are accurate as of the date/time indicated and are subject to change. Any price and availability information displayed on [relevant Amazon Site(s), as applicable] at the time of purchase will apply to the purchase of this product.)
related posts