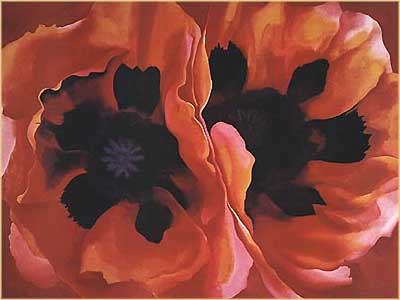 It’s a shame, really, that Georgia O’Keeffe and her work have been co-opted for so many agendas other than an unfettered appreciation of her great art. Feminists have politicized her history (perfectly legitimate for them to do, of course, though O’Keeffe kept her distance in later years) and the marketers of all things Southwest have brazenly exploited the "look." Then, too, the accessibility of the work itself has made it widely known and, perhaps, to an extent, overexposed, so that viewers have difficulty seeing it freshly.

Georgia O’Keeffe: The Poetry of Things provides a welcome opportunity to do just that. It brings together fifty-four works from fifty different collections, chosen from what O’Keeffe called her "things," as against her "landscapes," and the stated purpose of curator Elizabeth Turner is not to offer a broad survey, but rather a focused inquiry into O’Keeffe’s aesthetic philosophy. The subjects include flowers, fruit, leaves, bones, shells, crucifixes, her adobe house in New Mexico.

The flower paintings have had the greatest exposure, the closest identification in the public mind with O’Keeffe. The deeply sensual textures (often so velvety you want to reach out and run your hand along the nap – but please don’t touch the pictures) and intensely brilliant colors of such works as Oriental Poppies (1928) and Petunias (1925) virtually force a response. It is the rare viewer who will not perceive what articulate San Francisco curator Timothy Burgard calls eroticized biology in these canvases and that is surely a reasonable observation of an element that cannot be denied. But these paintings go deeper than erotic coquetry. With her close-in focus, her toying with a tension between depth perspective and a flatter surface, and her deployment of color, O’Keeffe achieves complex abstract compositions that are a distillation of deeper emotion, of a profound spiritual response under the surface eroticism.

It is interesting to note, too, the paintings that do not strike first with brilliant color. Brown and Tan Leaves (1928), uses a more subdued palette, but through shadowing and texture, O’Keeffe achieves a muted, but no less effective sensuality. Morning Glory with Black #3 (1926), in pale shadings of gray, green, and white, is so delicate that it might float away were it not compositionally anchored by a field of black in the lower right hand corner. It is another flower in close perspective, one whose fascinating subtlety rewards closer study.

A 1945 sculpture by O’Keeffe, Abstraction (Spiral) is a massive bronze whose weight is tempered by its white lacquer finish. The spiral, of course, appears repeatedly in nature, especially in the shells and flowers that so often held O’Keeffe’s attention. With the tendril-like final curve of the spiral, the piece turns into an exotic orchid of the imagination.

There are several canvases in the exhibit from O’Keeffe’s series of crosses, drawn from the cruciform structures that dot the New Mexico countryside, placed there by Los Hermanos, a lay religious group given to rather extreme rituals of penitence. In Black Cross with Red Sky (1929), the cross boldly splits the canvas with a vertical down the center foreground, while the skyline, in the background, of blue-black mountains looming over the desert, maintains the continuity of the horizontal. Those elements, along with the red sky, create a powerful abstraction that distills the content beyond literal interpretation into a resonant emotional expression.

Another work reflecting O’Keeffe’s New Mexico influences is the surrealistic Summer Days (1936). The skull of an antlered deer creates a strongly patterned series of curves, imposed in the foreground over white clouds which obscure the sky. In the far background, patches of blue appear over the distant hills of the high desert. Between these two elements is a bunch of wildflowers, offering the strongest color of the composition, balancing the power of the neutrally colored skull. While the skull is a reminder of mortality, it is not a morbid image, here. Rather, with its dried and bleached look, in combination with the flowers, O’Keeffe offers a timeless allusion to the connectedness of life and death.

The exhibit uses a quote from O’Keeffe as a keynote for its theme:

Nothing is less real than realism. Details are confusing. It is only by selection, by elimination, by emphasis, that we get at the real meaning of things.

O’Keeffe implemented that approach and, in conveying her real meanings, she created as well new ways to see, new forms for art, and the sheer pleasure of work of extraordinary beauty.