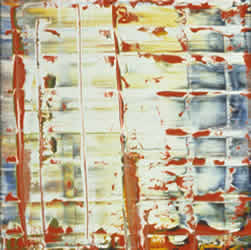 The work of German painter Gerhard Richter now commands the highest prices of any living artist, but, even so, the body of his work presents a formidable challenge to the viewer. It is at once deeply rooted in the painter’s own life history in troubled times (under a Nazi regime, under a Communist regime) and coolly aloof in the representation of images from that history, as if unwilling or unable to make judgements about it. He works in both representational and abstract modes which seem connected only by his unquestionably masterful painterly skills. Somehow it is easier to look at his paintings one at a time; viewing them all together creates a need to make some sense of the full body of work which is not so easily accomplished.

The exhibition Gerhard Richter: Forty Years of Paintingpresents just that opportunity as retrospectives are wont to do. With some 140 paintings ranging from 1962 to the present, every phase of Richter’s career is represented.

Curator Robert Storr refers to a "dialectic of found photos with painted images" in which Richter engages. Many of these paintings are, indeed, based on photos, and they have the look of somewhat faded photographic prints, in a limited range of grays. But Richter, in these paintings, is not doing photo-realism (though he does that in other works, e.g. Two Candles); he doesn’t let the viewer forget that this is a painting. The difference is in the larger scale and in the way Richter shifts the image out of focus, producing a somewhat blurred effect, almost as if, perhaps, the camera had moved or the hand slipped in the developing process. But these are paintings, not photographs, and the virtuosity of the painter in creating these effects is of the caliber that elicits the awed question, "How does he do that?"

The blurring has varying effects, from creating a rather romantic glow around the banal image of a roll of toilet paper to somewhat ironically softening the drab, institutional look ofAdministrative Building. The same look is applied to portraits of his father and his uncle. The significance of these blurred portraits is only understood in context. Richter’s father embraced the Nazis and as a result was prevented from continuing his career as a teacher after the war; the clownish portrait has a sad, rather defeated aura to it. His uncle, on the other hand, is pictured in his military uniform; he was killed early in the war.

Richter uses many images that are drawn from current events. But while the historical context of a painting surely adds richness to its appreciation, the degree of resonance generated in the viewer will dwindle significantly over time and distance from those events unless the painting itself offers more universal meaning. While a painting of planes dropping bombs offers an image that will surely elicit a response, how many viewers in future generations will know whose planes are bombing whom and why?

Eight Student Nurses, a series of paintings based on yearbook photos, again has the look of banality. When you learn that these were the victims of a serial murderer, they take on a whole different cast. And the series on the Baader-Meinhoff events, October 18, 1977, for which New York MOMA paid some $15 million, depends almost entirely on a knowledge of the German history of the time; for the great many without that history, it is hard to see how those paintings will significantly communicate more than a rather vague sense of foreboding. You don’t have to know the history of the Spanish Civil War to be profoundly moved by Picasso’s Guernica because Picasso directly expressed his passion. Richter subverts his feelings, as if he’s afraid they will fly out of control.

On the other hand, Richter’s realistic portraits of his wife and children are instantly accessible, extraordinarily executed, and, though cool, do radiate a low-keyed affect. Lesende (1994) is from a photograph of his wife and has not unjustly been described as Vermeer-like.

The large Townscape canvases and other works from the late sixties put Richter’s stamp on concurrent Op Art ideas. Close up, Townscape SL, with its thickly laid on strokes of paint, appears completely abstracted; as you back off from the painting it is transformed into a strong aerial cityscape. And Gray Streaks creates an unmistakable moire effect. There are color chart pictures that suggest later conceptual work, such as that of Sol Lewitt. There is a large variety of abstractions, ranging from the gestural to the highly calculated, often created with heavy application of pigment, scrapings, layerings. Richter has developed a technique of applying oil to aluminum panels, utilizing a squeegee to achieve his desired effects, often sensually beautiful. His color choices in the abstractions range from monotonic to bright acidic colors reminiscent of the German Expressionists.

A major retrospective such as this one, particularly one originating at NYMOMA, is somewhat daunting in the way it enshrines the work of the artist. Storr’s lengthy and interesting comments in the catalogue are part and parcel of that effect. For the genenal public audience, though, the verdict may still be out. While some of the individual works are unquestionably evocative and appealing, others are likely to generate little more than shrugs. If the mastery of his medium is awe-inspiring, is is nonetheless difficult to reconcile the wildly diverse range of styles into a coherent whole. The cool and calculated stance that Richter takes is off-putting. While he surely has an element of emotional input to his work along with its intellectual and technical deliberation, by and large these paintings do not communicate on an emotion-to-emotion basis.