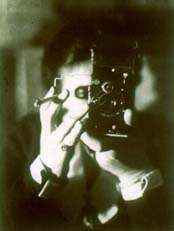 In her 1925 self portrait, photographer Germaine Krull (1897-1985) keeps her face mostly hidden and in soft focus, while her camera dominates the foreground and a cigarette, held between her fingers, provides remarkable balance. It’s a complex image in which she defines herself through the tool of her art, but reveals a great deal more in the hands, the jewelry, the tailored dress. And the cigarette itself, at that moment of history, asserts an at-the-edge sort of independence. The dangling ash that is about to fall and the shutter that is about to click add a temporal element to the powerful composition, with its crisscrossing diagonals and the bifurcated center of black camera and white flesh. It is a photograph that is arresting today; one can only imagine its power in 1925 to eyes less accustomed to such images.

Germaine Krull: Photographer of Modernity, a retrospective exhibit, offers some 130 works spanning six decades of the twentieth century. The show requires particular focus on the part of the viewer, because the work that Krull pioneered, the boundaries that she stretched, have become so much a part of our visual heritage that it takes a special effort to see these photographs freshly. Krull profoundly influenced subsequent generations of photographers and artists, so that her work and the ripple effect it produced are embedded in our cultural history and contemporary frame of perception.

This is not to suggest that the sheer aesthetic pleasure of Krull’s photographs is lacking in any way. She was one of the first, for example, to photograph industrial images – factories, bridges, machinery, sometimes viewed from vertiginous angles, finding the essence of the muscular patterns inherent in this subject matter. Her portfolio, Metal (1928), was a high point in her career, a time when she was ranked with Man Ray as a leading photographer of her time.

From the earlier twenties there are a series of nude studies and explorations of Lesbian sexual images, reflecting the open, experimental spirit of Weimar Germany. Krull never worried whether what she was doing was photojournalism or "commercial" photography or art, a parallel to Kurt Weill, the great composer from the same period who was never concerned about whether his work was defined as opera or popular stage music. The definitions weren’t important; the observation and expression were paramount. He wrote music. She took pictures.

Krull’s long, eventful (and highly political) life took her to Africa in the 1940s and to Asia for two decades, where she was a part owner and manager of the Oriental Hotel in Bangkok. The last part of her life was spent in India. She photographed wherever she went and there are examples in this exhibit of her work from each period.

The catalog accompanying the retrospective, by its curator, Kim Sichel, is an extensive scholarly documentation of Krull’s life and work, an essential volume for the photography library.