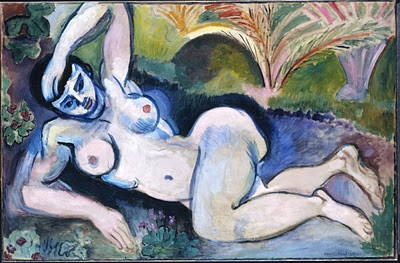 Gertrude Stein (1874–1946), one of the most influential Americans of the 20th century, was a literary pioneer, transatlantic modernist, art collector, American expatriate, style-maker, networker, celebrity, lesbian, and muse to artists of several generations.

She is considered a genius of modern writing. Although much of Gertrude Stein’s writing may be difficult to follow for modern readers, she has numerous hard-core fans who love her idiosyncratic, repetitive, and humorous literary style. Yet, Stein’s lasting impact may well be her encouragement of, and influence over, many artists and writers, including Picasso, Matisse, Ezra Pound, Thornton Wilder, and Ernest Hemingway.

Art critic Leo and younger sister Gertrude were the first to leave their upper middle-class family in Oakland, Calif., traveling to Paris to visit the 1900 World’s Fair and then relocating there in 1903. Michael and Sarah soon followed.

Because they were adventurous patrons and hosted legendary Paris salon gatherings, the four quickly integrated into the intellectual circles of the Parisian avant-garde. As powerful tastemakers, the Steins had a commitment to new art and artists, the confidence in their inclinations, and the drive to build appreciation for the work that they loved in Europe and in the United States.

Sarah Stein, in 1906, became the first person to show Matisse’s paintings in the United States, and Leo served as art consultant to Albert Barnes, founder of the famous Barnes Foundation of Merion, Penn. (soon to be relocated to Philadelphia).

In 1914, because of sibling rivalries and Leo’s dislike of his sister’s stream-of-consciousness writing (or “cubist writing” as she referred to it) and her interest in cubist art, Leo and Gertrude separated and split up their collections, with Gertrude retaining the Picassos and Leo, the Matisses. They never spoke again. Leo Stein moved to Italy, where he remained until his death in 1947.

“The Steins Collect: Matisse, Picasso, and the Parisian Avant-Garde” has been curated with intelligence and artistry, combining the four Steins collections. The dazzling assembly of art includes approximately 200 iconic paintings, sculptures, drawings, prints, and illustrated books. The sixty-some seminal works by Matisse and the forty or so by Picasso pack tremendous visual, emotional, and intellectual wallop, while the excellent pieces by Bonnard, Cézanne, Gris, Renoir, Toulouse-Lautrec, and Vallotton, among others, round out the exhibit. I was particularly charmed by two portraits by Marie Laurencin, an artist with whom I had been unfamiliar.

Drawing from prominent public and private collections worldwide, “The Steins Collect: Matisse, Picasso, and the Parisian Avant-Garde” spans the family’s entire art-collecting history and is presented roughly in the order of acquisition. Among the assembly are such masterpieces as Matisse’s “Blue Nude” (Baltimore Museum of Art), “Woman with a Hat” (SFMOMA), “Self-Portrait” (Statens Museum, Copenhagen), “Tea” (LACMA), and Picasso’s “Lady with a Fan” (National Gallery of Art, Washington, D.C.), “Boy Leading a Horse” (Museum of Modern Art, New York), “Nude with Joined Hands” (Museum of Modern Art, New York), and “Portrait of Gertrude Stein” (Metropolitan Museum of Art).

“Seeing Gertrude Stein: Five Stories” features more than 100 artifacts and artworks by artists from across Europe and the United States. It includes paintings, sculpture, photography, drawings, and gifts to Stein, as well as items from her custom-designed wardrobe by Pierre Balmain, manuscripts, books, periodicals, letters, journals, film clips, correspondence, personal belongings, and ephemera.

The show focuses on Gertrude, post-Leo, from 1915-1946, when she became recognized as a major writer, collected the works of the neo-romantics, and instinctively used her talent to promote others, including gay artists such as Carl Van Vechten, Pavel Tchelitchew, and Cecil Beaton, who each contributed to American and European culture.

Alice B. Toklas (1877-1967), Stein’s lifelong partner, and author of the famed “Alice B. Toklas Cookbook,” is featured in the show, which examines the aesthetics of fashion, household décor, entertainment, and cuisine these two women created together. Also on display are many fascinating portraits and sculpture of Gertrude Stein.

Both exhibitions include room-sized photographs of the Stein family, notably family pictures and Gertrude’s salon with art crowded together to the top of the high ceiling. “Seeing Gertrude Stein: Five Stories” displays a particularly evocative life-sized photograph of Gertrude standing in front of the French country home she shared with Alice.

Gertrude Stein remained in France with Alice B. Toklas until Stein’s death in 1946, excepting one visit to the United States in 1934-1935. That is when Stein, upon realizing that her family’s Oakland home and neighborhood were no longer recognizable, said in remorse the often-misused phrase, “There is no there there,” referring to the loss of her home, rather than a disapproving comment about the city of Oakland, as many have thought.