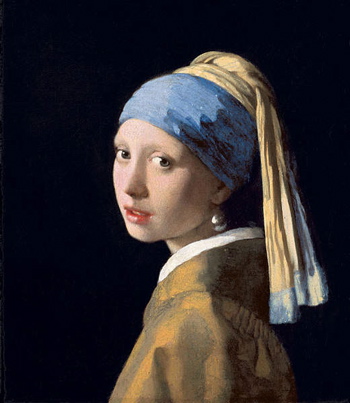 ‘Girl with a Pearl Earring’: Dutch Paintings from the Mauritshuis, The Hague

The thirty-five precious jewels of 17th century Dutch paintings from The Hague’s Royal Gallery Mauritshuis are a pleasure to see. The works, including Johannes Vermeer’s celebrated “Girl with a Pearl Earring” (1665), glow with finely tuned realism and matchless technique. This remarkable collection contains rarely seen masterworks, all in nearly perfect condition, including intricate and detailed Dutch landscapes, maritime and city scenes, portraits, and still lifes. Their portrayal of 17th century Dutch life is exceptional and enriching.

The centerpiece of the exhibition is the mesmerizing “Girl with a Pearl Earring,” which at 17.5 by 15.3 inches is smaller than one might imagine. Yet, the picture’s inner glow, as well as its lighting and placement in the gallery, draw one to it. The “Girl’s” mysterious pose allows the viewer to see her grey-blue eyes clearly from all angles. “Girl with a Pearl Earring” was delicately restored in the 1990s by the Mauritshuis. Her face, clothing and earring sparkle as if painted yesterday. Vermeer’s renowned use of light makes the painting one of Vermeer’s finest works.

Despite the book and movie’s speculation about the girl’s personal history, Vermeer was not painting a portrait of the sitter. In fact, paintings such as this one are called tronies, which are not portraits at all, since they were not meant to depict specific people. They were intended to represent a fictional character or style. Hence, the exotic brilliant aquamarine turban. Turbans were not worn in 17th century Netherlands.

Several Rembrandt van Rijn paintings on exhibit are tronies, such as the vital “Man with a Feathered Beret” (c. 1635), based on a self-portrait, and the lifelike and engaging “Portrait of an Elderly Man” (1667).

The Dutch Golden Age style is exemplified by the subtle and natural paint colors that reveal the quality of the northern light, the flat landscapes and blustering seascapes unique to the Netherlands. Using only one or two bristles, the brushwork is precise. The small, sometimes-moralizing humor found in the works’ details is also a hallmark of Dutch Golden Age paintings.

Some of the artists in the exhibit, e.g., Rembrandt van Rijn, Jacob van Ruisdael and Jan Steen, are well known. I was delighted to view wonderful paintings by artists new to me, such as Abraham van Beyeren’s “Flower Still Life with a Watch,” (1663-1665). On first inspection, the work seems completely realistic and authentic. Yet, the flowers are from different seasons and so could never be seen together. Giving movement and life to the piece are the fresh flowers that seem to have been recently added to the vase, surrounding older flowers drooping and dropping at the base of the vase and onto the table near the watch (tempis fugit).

Almost as fascinating as the art are the ways in which political and religious freedom, trade and science fostered artistic freedom and art appreciation in the Netherlands of the 1600s. The emergence of the Dutch and Flemish Golden Age of painting is a significant event in the history of visual art. In the late 1600s, the northernmost provinces of the Low Countries broke away from Spanish and Catholic domination. They eventually became the Dutch Republic and largely practiced a form of Protestantism, the Dutch Reformed Church. In fact, many of the United States’ founding principles are derived from the Dutch Republic’s Declaration of Independence and Constitution.

Surprising the rest of Europe, this small nation thrived without any religious or royal leaders. In fact, the Dutch Republic succeeded beyond all expectations by dominating world trade, conquering a huge colonial empire and operating the largest fleet of merchant ships of any nation. The Netherlands’ stock exchange, the oldest in the world, was founded in 1602 by the Dutch East India Company.

With a booming economy and the growth of the prosperous middle class of Dutch burghers, a unique style of art developed with Dutch artists painting portraits of individuals, landscapes and culture surrounding them. Their precise and elegant style added to the quality of the genre. This exhibit reflects the enlightenment of the period and the freedom to paint secular subjects, rather than largely Catholic religious art.

As an companion show to the “Girl with a Pearl Earring: Dutch Paintings from the Mauritshuis,” the de Young Museum is displaying “Rembrandt’s Century.” It draws largely from works on paper in the Museums’ Achenbach Foundation for Graphic Arts and contains many works by Rembrandt, engravings, drawings, fanciful watercolors and more works by other artists. These small detailed black and white pieces will be most appreciated by close inspection.

Don’t miss this golden opportunity to see treasures of the Dutch Golden Age.