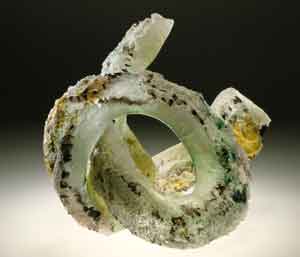 Glass: Material Matters is the first exhibition of contemporary glass art ever organized by the Los Angeles County Museum of Art. According to the foreword in the exhibition catalog by Bruce Robertson, deputy director of art programs, this is &#147;one of the first presentations anywhere to explore the artistic use of glass across a diverse range of decorative objects, sculpture, conceptual art and architecture in a single exhibition.&#148; Later, he calls it &#147;a consciously eclectic presentation&#148; of glass in a spectrum of thematic, formal and technical directions from the mid 1980s to today.

Eclectic it is.Drawing on private collections and LACMA&#146;s own holdings, LACMA&#146;s Curator of Contemporary Art, Howard Fox, served as a co-curator with Sarah Nichols, chief curator and curator of decorative arts at the Carnegie Museum of Art in Pittsburgh. Together, they have assembled the works of 64 artists, presenting more than 100 pieces in a series of rooms that explore essential ideas about glass, organized both by general categories as well the curators&#146; own lines of inquiry.

As a material, glass is extraordinary. It can be blown, molded, sandblasted, cut, carved, crushed, colored, stained, painted and fused. It can be soft-spun or rock-solid, crystalline, translucent or opaque.The exhibition begins its investigation with &#147;Pure Form,&#148; exploring glass&#146;s ability to assume any shape, from minimal abstractions to the most ornate expressions.On one end of the spectrum we have Jessica Loughlin&#146;s &#147;Vertical Views,&#148; thin wall-mounted gray and white architectural planes curving outward at the base.Closer inspection reveals mysterious words playing across their frosted surfaces, tantalizing and nearly invisible.On the other end, Toots Zynsky&#146;s joyful &#147;Chaos in Paradise&#148; is a large undulating clamshell made of fused glass threads in calypso hues of blue, orange, turquoise and gold, looking like a colony of soft corals undulating in tropical waters.Celebrated Murano glass artist Lino Tagliapietra&#146;s &#147;Boat&#148; is a four-foot-long reduction of a Venetian gondola, in deep amber with black stripes. And speaking to the expressive power of pure glass, a central place is given to V&#146;era Li&#146;skov�&#146;s &#147;Music,&#148; clear tubes fused into a rising arpeggio, a melody captured in glass.

In &#147;Decorative Impulse,&#148; the curators celebrate the often whimsical interpretations of everyday objects so popular with glass artists.Richard Marquis is noted for his use of latticino, glass &#147;canes&#148; with fine lacelike pinstriping, and murrine, slices of patterned glass used as decorative elements or fused into solid objects.His preposterously shaped &#147;D&#146;Marquis Teapot Trophy&#148; and &#147;Goblet Teapot&#148; wink at the notion of functionality, delighting us with an amusing look instead.In comparison, Flora Mace and Joey Kirkparick&#146;s &#147;Zanfirico Still Life&#148; combines technical mastery with formal restraint in a display of oversized glass fruits blown out of latticino, like a Venetian dessert tray.

The ability of glass to mimic living things has long been exploited (consider the realistic Glass Flowers at the Harvard Museum of Natural History, dating back to the late 1800s). In the LACMA exhibit, we enter the organic world with &#147;Primal Nature.&#148; Here, the curators present artists who explore glass&#146;s earthly origins, even using it to produce eerie &#147;generative life forms,&#148; per the wall text. Perhaps the most ominous is Jack Wax&#146;s &#147;Issue,&#148; looking for all the world like a giant, dark insect egg case studded with sharp pointed scales.Also intriguing: Lynda Benglis&#146;s &#147;MI,&#148; a twisted sinuous shape resembling the fossil of a giant worm; and &#147;Emmett,&#148; a thick corrugated glass excrescence evoking a partially dissected boa constrictor.More restful pieces include Ivan Mares&#146;s &#147;Haystack,&#148; a huge kiln-cast luminous green arc reminiscent of a UFO half wrapped in a grass basket; and Toshio Iezumi&#146;s Zenlike &#147;Ring of Water,&#148; a polished bowl-shaped pool of laminated blue disks that draws the viewer to peer into its icy depths.

Of all the rooms, &#147;The Body in Question&#148; is most personally unsettling. Here, the curators present artists with an obsessive interest in the visceral. At the entrance we are greeted with Michael Aschenbrenner&#146;s wall installation, &#147;Graduation Gowns Lay in Rags at Their Feet,&#148; from his &#147;Damaged Bone&#148; series.This is an exorcism of the artist&#146;s own trauma; as a Vietnam combat officer he was severely injured, requiring multiple surgeries and a painful rehabilitation.His piece comprises a gruesome collection of human knees, forearms, elbows and other bones in richly colored cast glass bound with makeshift splints.Belgian artist Wim Delvoye plays further havoc with our sensibilities in &#147;Erato,&#148; a pair of stained glass Gothic cathedral windows; but instead of the lives of the saints, he shows us X-rays of live people handcuffed and chained, and 3D sonograms of couples having sex.

&#147;Conceptual Art&#148; returns us to the realm of the familiar in terms of art movements.Rita McBride&#146;s &#147;Chair&#148; reinterprets the traditional bentwood cane chair in brown Murano glass, but this chair has no seat, and its parts are held together by tightly wound plastic wrap.Sherrie Levine delivers an homage to Constantin Brancusi with &#147;Crystal Newborn&#148; and &#147;Black Newborn,&#148; authorized casts of his 1915 marble sculpture.While less ethically problematic than frank appropriation, Levine&#146;s work raises questions of materiality and originality in art.

The final room is set up as a theater running a video of architectural glass, including realized projects (&#147;Lens Ceiling&#148; by James Carpenter for the Phoenix Federal Building), projects in development (&#147;London Bridge Tower&#148; by Renzo Piano & Building Workshop) and purely conceptual designs (Zaha Hadid&#146;s floating gossamer &#147;2012 Olympic Village&#148;). Unfortunately, the video is a pastiche of images without context; the buildings are only identified at the end.Viewers would be better served by captions labeling each project as they appear.

Glass: Material Matters was admittedly difficult to bring to fruition.Besides the curatorial challenges of selecting artists and specific pieces, internal turmoil at the museum repeatedly delayed the project&#146;s realization.According to Howard Fox, the inspiration for an all-glass exhibition at LACMA dates back to 1991, but changes in leadership and other conflicts interfered. Ultimately, the delay gave the curators time to pursue a more thoughtful investigation of the material, tap deeper into the resources of LACMA&#146;s Decorative Arts and Modern Art departments, and spend more time combing through private contemporary glass collections. Altogether, Fox and Nichols have assembled a remarkable exhibition that will delight glass art enthusiasts while opening the eyes of those who regard glass simply as a utilitarian medium.