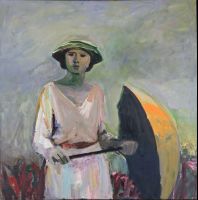 Before Elmer Bischoff’s career and development as a painter had gotten into gear, abstract expressionism–the New York School–had already taken firm root. Encouraged by Peggy Guggenheim, Jackson Pollock and Robert Motherwell and Hans Hoffman exhibited at Art of This Century Gallery in the mid-1940’s. Pollock’s landmark show at Betty Parson’s Gallery was in 1950. What united a diversity of expression in the the New York School was nonrepresentational art that celebrated individuality, spontaneity, and improvisation. Bischoff was to find his way to his own expression, a break from the dominant New York themes.

The Oakland Museum has organized a major Bischoff retrospective, curated by Susan Landauer who simultaneously publishes her fine study, Elmer Bischoff: The Ethics of Paint. The exhibit traces Bischoff’s development from his earliest work, before the war, when he was exploring abstraction with a surrealist bent; Picasso and Miro were strong influences. After he served in the Air Force he returned to the Bay Area and in 1946 joined the faculty of the California School of Fine Arts. His colleagues there included Richard Diebenkorn and David Park; by the mid-1950’s the three created a schism from totally nonrepresentational abstract expressionism and reintroduced figurative elements in their work–the genesis of the Bay Area Figurative movement.

While some of the earlier works are interesting, it is the figurative paintings of the 1950’s and 1960’s in which Bischoff found his most effective and successful expression. His figures are not "portraits;" rather they are somewhat generalized, often with merely the suggestion of facial features. There’s a moodiness to these works, a sense of isolation; when there are two figures they don’t seem connected. But this isn’t the darker angst of an Edward Hopper, though the association is unavoidable; Bischoff expresses a gentler, if no less existential, alienation.

Bischoff’s painterly technique is as much the subject of these paintings as the figurative elements. He lays on the paint thickly, an often assertive impasto that lends vigorous energy and movement, even to a scene of relative stillness. such as in Two Bathers. (The brushwork and the use of color are legacies of the expressionist aspect of the earlier work.) The figures here are distinct, and the landscape is broadly defined, but with a sketchy, real/unreal quality. There’s a palpable tension between the representational and the abstract, between stillness and movement. And it is all in counterpoint to the sensuous colors and dappling light that fill the canvas.

In the earlier, simpler, and elegantly graceful Woman with Orange Umbrella, the brushstrokes complete the shape of the oval defined by the curve of the umbrella and the woman’s hat. The brighter orange of the umbrella is echoed in small splashes of the color that help define the drape of the woman’s dress. There’s a vague suggestion of flowers below in a few squiggles of darker color which ground the composition. The big, neutral gray/green sky has no real depth, but is full of the presence of brushstroke and subtle changes of color. Whether working in the splashier hues of the Two Bathers or the subdued palette here, Bischoff is a masterful colorist.

Nowhere is that more immediately manifested than in the mural-sized 1967 Seascape. The sails of a boat are tossed in a dark blue sea, with the sky (covering perhaps 80% of the canvas) a riot of reds and oranges, studded with clouds both light and dark. In its overwhelming and turbulent dominance of sea and sky, rendering the small boat vulnerable before the immensity of nature, it’s a grandson of a Turner seascape, albeit Turner on acid. The calm and cool of earlier work has given way to the mysticism of German mythology and the Wagner operas which fascinated Bischoff at this time.

By the end of the 1960’s, it seems that the unique mode of expression that Bischoff had worked for two decades no longer presented the challenges it once had. After a fallow period, he reverted to completely abstract work, now using acrylics to achieve a lighter effect. A number of these paintings are included in the exhibit and some of them display Bischoff’s best characteristics–spontaneity, energy, color. But they are not particularly memorable, while any number of the figurative works will remain etched in memory–superb paintings that could be none other than Bischoff’s.