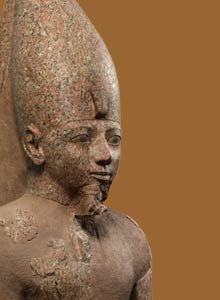 The new de Young Museum’s major opening exhibition is Hatshepsut: From Queen to Pharaoh, which attempts to dispel myths shrouding the legacy of an enigmatic ruler of ancient Egypt. It presents the changing perceptions of a queen who, while only in her twenties, took over the throne after the death of her husband, Thutmose 11, who was also her half brother.

If anything, this show, which takes up nearly 12,000 square feet of gallery space, provokes more questions than it answers. Hatshepsut, a female pharaoh who co-ruled with her young nephew, Thutmose 111, in the early New Kingdom, circa 1479 B.C., gradually assumed the title of King in addition to the queenly titles she already possessed, a metamorphosis explored in the exhibition. Monuments depict her both as a woman and as a man dressed in king&#146;s regalia and a false beard.

Only six years into her reign, Hatshepsut proclaimed herself king and, for good measure, the daughter of a god. Besides cultivating her own mythology and consolidating authority, the reason she took these extraordinary actions is a matter of speculation. Her she/he, queen/king transformation appears to be less a function of dual sexual identity than a shrewd instinct for power.In ancient Egypt, men had more of it. "The kings of Egypt were the links to the gods,&#148; says exhibition curator, Renee Dreyfus. &#147;Queens didn&#146;t rule. To rule, one had to transform oneself into a king. One of most interesting things about her is that she succeeded in doing it.&#148;

Among the 260 objects on display are royal statuary and relief, monumental sculptures in the image of the royal court, ceremonial objects, decorative arts, such as bowls painted in an exquisite Egyptian blue, brilliant gold jewelry and many luxury items, including a stunning pair of solid gold sandals. Surrounded, as she was, by male courtiers and advisors, a woman ruling a patriarchal society was a phenomenon and, for some, an unwelcome one. Twenty years after her death, Hatshepsut&#146;s name and image were obliterated, her statues tossed into quarries and most of her monuments destroyed.She was virtually forgotten, until rescued from oblivion, through recent archaeological finds, excavation of tombs and an increased understanding of hieroglyphs.

The systematic destruction of her monuments by her nephew and the omission of her name from later king lists have been a subject of controversy among Egyptologists. One theory is that there was backlash against a woman who had the audacity to threaten the exclusively male ascension to the throne. (Only the images of Hatshepsut that depict her as queen were spared.) Evidence of this official eradication campaign can be seen in a reddish quartzite sarcophagus originally commissioned during her lifetime. It was later re-carved by her father, Thutmose 1, who had Hatshepsut&#146;s inscribed names covered with paste and his own names incised.

The scarcity of available material about the central figure of the show posed a dilemma for curators trying to piece together a narrative of her reign. &#147;The questions are manifold because we&#146;re just starting to focus on her as a important and intriguing personality,&#148; explains Dreyfus, who, along her counterparts at UC Berkeley and the Metropolitan Museum of Art, which lent more than half the artworks, have addressed the problem by providing context– or padding, depending on one&#146;s point of view&#151;in the form of objects from other pharaohs or influential players of the time. In a way, Hatshepsut&#146;s &#147;backstory&#148; is more intriguing than the exhibit that resurrects her.

Though some of these displays are quite fascinating and beautiful, they pale in comparison to the colossal representations of Hatshepsut herself. Hatshepsut was usually portrayed as a male ruler but in one large red granite statue that is considered a realistic portrait of her, she appears in female dress and is adorned with symbols of kingship.She has sensual lips, narrow feet and long elegant toes. In a kingdom where size mattered, one can look at the statue next door–a kneeling, red granite figure from her temple. Here, she&#146;s shown as a king outfitted with a crown, kilt and a false beard. Staggering to encounter, it&#146;s nearly three times larger than the more feminine depiction. In the same gallery is a ten foot tall, striding statue, thought to be the only one if its kind in existence.

And then there&#146;s the piece de resistance:a spectacular, giantsphinx made of painted granite. It portrays Hatsheput with the body of a lion, huge carved paws and muscular haunches. In remarkable condition, it is one of only six such sphinxes that survive from Hatshepsut&#146;s temple at Deir el-Bahri. What is most impressive about these immense, ancient statues, some weighing more than 10,000 pounds, as well asthe small,delicate piecesis their refinement and vitality, a testament to the artistry and craftsmanship of the people who created them. After all, they were built for eternity.

Though there have been Hatshepsut exhibits in Europe, this is the largest collection ever assembled and many pieces have never been seen by the public. Still, one is left wanting more and Hatshepsut, inscrutable as the sphinx, remains a mystery.