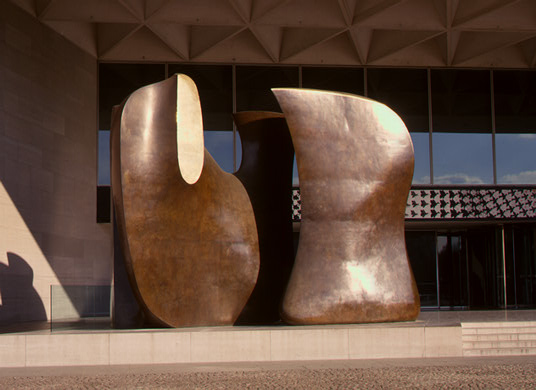 Celebrating Moore: Works from the Collection of

Art must be seen in the flesh, as it were. The best digital photos online don’t give the viewer a clue as to the scale and the textures of a painting and surely (even with the 3D technologies that have been developed) convey still less of the essence of sculpture which is about defining space, the one thing most obviously absent on your flat-screen monitor.

San Francisco’s Legion of Honor, a stately neoclassical building, is entered through an elegant colonnaded courtyard normally presided over in glorious solitude by a large casting of Rodin’s The Thinker. For the current retrospective exhibition of the works of Henry Moore (the first in the U.S. since the 1983 Metropolitan Museum of Art show), The Thinker has been given something new to deliberate, as he is surrounded–nearly dwarfed–by a half dozen grandly scaled Moore piecesdisplaying massively confident virtuosity and inventive variety. The Thinker should be inspired to go on thinking for a long time to come.

The Large Standing Figure: Knife Edge (1976), nearly twelve feet tall, armless, its lower portion suggesting a draped covering, is a direct reference to classical sculpture, but expressed in unmistakably modern terms. It provides an appropriate link–in this neoclassical setting, with The Thinker perhaps a buffer, Rodin himself a precursor of the modernism that Moore so distinctly represents. Oval with Points, an earlier work, is also large (11 feet), but totally abstract–a great, voluminous donut shape with two graceful arms reaching across the central gap, tapering to points that don’t quite meet. The delicacy of the two points heightens the massiveness of the oval and creates an almost tangible tension within the poised balance of the whole. Strikingly simple, breathtakingly right.

There are nearly one hundred sculptures (most inside) in the exhibit as well as drawings, maquettes, and plasters, providing a sweeping overview of Moore’s six-decade career. Today’s public, accustomed to abstracted forms, will be reminded that Moore’s work, now considered accessible, was once seen as radical and was a key influence in introducing the language of modernism to sculpture.

Early works, such as the marble Dog (1922) and the alabaster Head (1923) demonstrate Moore’s attraction to pre-Columbian art and how his own creative imprint was applied to different media. The variety of materials he used is wide–stone and wood of various kinds, plaster, bronze. A 1930 Reclining Figure in bronze, almost relief-like in its flattened plane, is an early example of Moore’s career-long investigation of the subject. He also returned repeatedly to the subjects of mother-and-child and two forms, both represented by numerous examples in the show.

In the 1930’s, the influences of Brancusi, Picasso, Giacometti, and Arp all came to play in Moore’s development. The 1936 Two Forms, in Hornton stone, are abstract volumes with subtle curves, carrying indentations, bumps, and lines reminiscent of a Miro drawing. There is a series of pieces in which lines of string are used, defining space with airy lightness, contrasted with the solid weightiness of the base material.

The large 1939 Reclining Figure in elmwood, richly grained and a warm orangey color, is a serpentine flow of abstracted arms and legs, defining the spaces between. A series of bronze helmeted heads from 1939-1940 grow from the events of the day, war imagery that shows up again in the 1953-54 Warrior with Shield, not an aggressive warrior, but a defensive one, holding his shield up in self-protection, limbs truncated, the surface covered with scratchings, like so many wounds.

Moore’s sculpture is ubiquitous–seen in commissioned, publicly-placed works displayed in cities worldwide and in museum collections everywhere. Not unlike Calder, the popularity and resulting overexposure of Moore’s work have perhaps dulled perceptions and diminished his stature–at least with inbred academics and jaded critics. This exhibit is intended, in part, to stimulate a reevaluation, but for the general public–which could care less about fickle shifts of opinion in ivory towers–it is a grand opportunity to see many of the masterworks of a sculptor who has remained in popular favor, and a new generation has its first chance to see the longdevelopment and range of Moore’s work