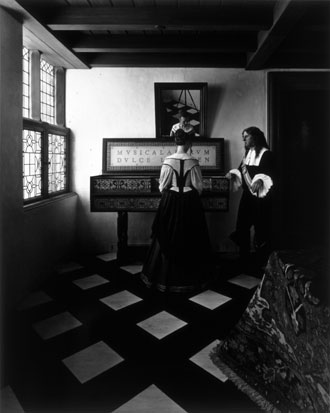 The initial impact of Hiroshi Sugimoto’s exhibition of a dozen black-and-white "portraits" at San Francisco’s Fraenkel Gallery derives from sheer size (the photographs are uniformly about five by four feet) and from dramatic lighting–his figures are posed under strong direct light against pitch black backgrounds. The combined effect of scale and contrast is impressively theatrical and accomplished through the mastery with which Sugimoto manipulates subject, camera, and the ultimate print.

Sugimoto’s work is represented in major museums and exhibited around the world. (The portrait series was commissioned by the Deutsche Guggenheim Berlin.) Earlier series include movie theater interiors, seascapes, museum dioramas, modernist architecture, and sculptures of Buddha. All his work shows the influence of minimalism, in stripping down images to their essence, and conceptualism, in which the idea, rather than the object, is primary.

In the series of movie screens, for example, the white screens centered in and dominating the usually elaborate movie palace interiors are the result of an exposure for the entire and exact length of time the film runs. There’s no way simply looking at the photograph that the viewer would know this. The main point is the artist’s ideation, how the work is conceived (and here the underlying interest in complexities of light and time and perception finding expression in the idea). Sugimoto says: "The image, then, is a kind of decoration of the concept. Concept is concept, it’s not solid so I need an image to make it solid and visual." Sugimoto hedges his bets a bit though–choosing those elaborately elegant theaters provided images interesting in and of themselves; even if the viewer didn’t have a clue about the underlying concept, there is pleasure in the images.

The portraits are more accessible, both in terms of image and in terms of concept. The series raises the question of what a portrait is, in the most fundamental terms. Sugimoto’s photographs are of wax museum figures, themselves often copied from painted or photographed portraits. Anne of Cleves, for example, is a photograph of the wax figure from Madame Tussaud’s in London, which itself likely drew on Holbein’s portrait, and others, of this one time wife of Henry VIII. Holbein had been commissioned by Henry to paint the Cleve sisters, both potential wives for political reasons, so Holbein was performing a reporting task, one which today would utilize photography.

Holbein, of course, was a great artist aside from this practical application of his painting and he had access to the subject herself. But the wax sculptor was working at second hand from the representations of others, perhaps combining impressions from more than one original portrait. And the wax sculptor layers on a completely new set of parameters related to the medium of wax and the intended popular theatrical impact of works shown in a wax museum–there’s a bias towards a sort of super realism, giving the viewers the sense of figures almost alive and frequently drawing the response" "How do they do that?"

Now along comes Sugimoto who creates a "portrait" yet another step removed from the original subject. As dramatic and recognizable as these figures are (and they do offer great sensual pleasure in the viewing), they are not portraits of the original subjects (though their images survive), but portraits of wax figures, rendered with powerful theatricality and superb technical expertise. Looking closely, one notices in a couple of the pictures that the hands are disproportionately large. But, of course, those are characteristics of the wax figure, not errors on the part of Sugimoto. He even allows a bit of light to be reflected on flesh here and there, seemingly deliberately reminding the viewer that this is a wax figure. At the same time, the presentation of these photos and the way we look at photos in general–the perceptive preconceptions we bring to them from prior experience with the medium–in some ways makes them more "real" than the wax figures themselves, the subjects before us.

That anyone made a wax representation of Vermeer’s The Piano Lesson is a small wonder in and of itself. Sugimoto’s photo raises similar questions about sequential representations, and familiarity with the painting certainly colors the way Sugimoto’s photograph is perceived. But while the wax portraits are more interested in the subject than in the preceding artist’s representation, The Piano Lesson in wax was an attempt to duplicate a great painting. In this it could not possibly succeed; the resulting photograph, however, does extend the conceptual dialogue established with the portraits.

Overall, it’s an intriguing concept and in that context Sugimoto has been brilliantly successful. At the same time, as with most conceptual art, while bearing multiple ideas and even sensual pleasures, it is emotionally cold. These works are not about feelings–of the subjects or of the artist.