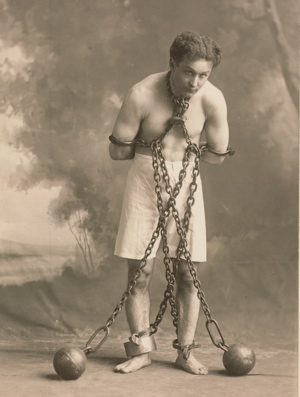 “Houdini, the Justly World-Famous Self-Liberator!” shouted a poster for Winnipeg’s Orpheum Theatre in about 1915.

The hyperbole was justified. Harry Houdini was indeed (and justly) world-famous, the most renowned magician of an era—the 1890s to the 1920s—when magicians were revered entertainers. It was, of course, a time before television, before most people had gone to the movies, before most people even had radios.

But—”self-liberator”? Yes: he’d “liberated” himself from rivers he’d jumped into while handcuffed and shackled, out of padlocked trunks and milk cans…. And perhaps metaphorically: from his status as an immigrant, from poverty, from obscurity.

That symbolism may be one reason why Houdini, who has been dead now for 85 years, is still remembered.

But more obviously, there were the “magic” tricks; and, though we’re not shown how he performed them, visitors to San Francisco’s Contemporary Jewish Museum can ooh and aah at images and film clips of them, as well as at the devices that Houdini used to captivate his audiences. “May wonders never cease” was one of Houdini’s favorite closing lines at his shows. He would have been pleased at the wonders revealed in the current exhibit.

The show, which originated at New York’s Jewish Museum, includes a trunk and a super-sized milk can; many pairs of handcuffs (at one time, Houdini apprenticed with a locksmith); and a replica of the “Water Torture Cell”—a glass-fronted, man-size box which would be filled with water and into which Houdini was lowered, head-first and handcuffed—and from which he would escape in seconds. Inspired by a visit to a mental hospital, Houdini devised a way to escape from a straight-jacked (there’s one on exhibit). A wall-size photograph shows a crowd in Rochester, N.Y., watching Houdini jump off a building.

Harry Houdini was born in Budapest, Hungary, in 1874, the son of Rabbi Mayer Samuel Weisz and his wife Cecilia. He was named Erik. Four years later, the family migrated to Appleton, Wis., where Houdini later claimed he was born. Eventually Erik changed the spelling of his name to Ehrich. The name Houdini was an homage to the great French magician, Jean-Eugène Houdin; “Harry” came from Ehrich’s nickname, “Ehrie.”’

In America, the Weisses lived in poverty. Houdini’s father, Samuel, the rabbi, lost his job in Appleton, and the family moved to New York, where Samuel worked various freelance jobs (Hebrew tutor, ritual circumciser, officiator at weddings and funerals). At one time, both father and son worked in the garment business. When he was 20, Houdini married the 18-year-old Bess Rahner, another performer, after a three-week courtship. They remained partners for life.

Erik/Ehrich/Ehrie/Harry began entertaining his friends at backyard circuses when he was just 9, then went on to perform in larger, traveling circuses and in vaudeville. His big break came in 1899, when Martin Beck, owner of the Orpheum vaudeville theaters, signed him. With exposure in the nationwide chain—eventually there were 45—as well as free outdoor performances of tricks such as jumping into a river, dressed only in skivvies and shackles, Houdini achieved not only national but worldwide fame.

“Houdini: Art and Magic” doesn’t limit itself to exhibiting devices and gadgets. Houdini was a skilled self-promoter, and posters, newspapers, photographs, ads, and more of what we today call media are on display. There are clips of silent films that Houdini starred in (“The Man from Beyond,” “Haldane of the Secret Service,” among others). He was also an avid reader, book collector, and author, and copies of his books are in the show.

Houdini met many of the famous people of his day—Theodore Roosevelt, Charlie Chaplin, Sarah Bernhardt, W. C. Fields—and inspired writers of the present day, such as Isaac Bashevis Singer, Michael Chabon, and E. L. Doctorow. He has also inspired contemporary visual artists, some of whose works are on display. The most interesting, I thought, is Joe Coleman’s “The Man Who Walked Through Walls (Harry Houdini),” a 1995 painting meticulously detailing Houdini’s entire life story in tiny scenes.

Short, stocky, not overly buffed, Harry Houdini captured the imagination of people not only in his own era but well beyond. His death in 1926 came from a burst appendix and infection, possibly the result of a blow to the stomach that he’d asked a fan to deliver. He was buried in a Jewish cemetery next to his mother. (The relatives of Houdini’s wife, Bess, insisted that she be buried in a Catholic cemetery when she died many years later.)

Among Houdini’s achievements was his debunking of spiritualism, the widely held belief that the spirits of the dead could communicate with the living. Despite his books and lectures exposing the fraudulence of the belief, séances to raise his spirit were held on October 31, the date of his death, for years after. One photograph shows a séance in New York in 1946. This may have been the one that my father was invited to attend (he refused). My own fascination with Houdini stems from my father’s mentioning that our family was related to Houdini’s—an idea I cherish though, so far as I know, there is no evidence for its truth. Maybe that’s why I found “Houdini: Art and Magic” so entrancing.

The one thing lacking in the show are any answers to the obvious question: How did he do it? My suggestion is to check out the museum shop, which stocks a good selection of books about Houdini. Answers might be found in one of those. I’ve chosen not to demystify the magic.

(18936)
$6.99 (as of January 26, 2021 - More infoProduct prices and availability are accurate as of the date/time indicated and are subject to change. Any price and availability information displayed on [relevant Amazon Site(s), as applicable] at the time of purchase will apply to the purchase of this product.)

(9862)
$19.99 (as of January 26, 2021 - More infoProduct prices and availability are accurate as of the date/time indicated and are subject to change. Any price and availability information displayed on [relevant Amazon Site(s), as applicable] at the time of purchase will apply to the purchase of this product.)

(18197)
$6.99 (as of January 26, 2021 - More infoProduct prices and availability are accurate as of the date/time indicated and are subject to change. Any price and availability information displayed on [relevant Amazon Site(s), as applicable] at the time of purchase will apply to the purchase of this product.)
related posts