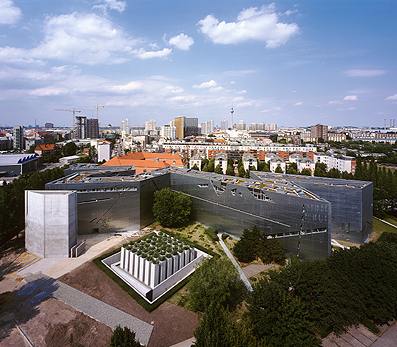 All photos (except second from top) by Bitterbredt�

"Build it and they will come," an angel advised Kevin Costner in a movie a few years back. He built the stadium and they did come. In the museum business, they seem to have gotten the message, too. Richard Meier’s lavish Getty Center in Los Angeles has attracted droves of visitors, beyond all pre-opening predictions, and Frank Gehry’s breathtaking Guggenheim Museum Bilbao has put that provincial city on the world cultural and tourist map.

After a somewhat difficult gestation, evidently involving internal political conflicts, another spectacular new building, the Jewish Museum Berlin, has become still another mecca for architecture enthusiasts, drawing over 150,000 visitors even before its official opening. Ironically, the museum has, as yet, nothing on display but its splendid home, designed by American architect Daniel Libeskind. (The museum has defined its scope as German-Jewish history from Roman times to the present. The first exhibition will open in September, 2001.)

The very idea of a Jewish Museum rising in what was the capital of the Third Reich is fraught with historical reverberation and emotional ambivalence. The people who were to be exterminated were not; they again assert their presence in a city that was home to their would-be (and all too successful) executioners. Non-Jewish Berliners, even these many years later, deal with varying degrees of communal introspection, denial, and guilt around the events of more than half a century ago. A Jewish Museum in Berlin simply could not be designed outside of the historical and emotional parameters of the Holocaust.

Libeskind, a theoretician and intellectual, considered these matters in great depth. To visit this new building, empty yet of collections, is an aesthetic and emotional experience of the highest order. Viewing the structure inside and out is akin to immersion in a huge piece of sculpture. Libeskind’s sense of space and light and volume is calculated and precise; it all seems as if it could not have been any other way. It is astounding to learn afterwards that this was his first building. (The commission was awarded following an international architectural competition.)

The building is entered through the Kollegienhaus, an historic Baroque structure, once a Prussian courthouse, standing immediately next door. From there a flight of stairs goes down, tunneling into the main structure, a massive zigzag sheathed in a zinc-titanium alloy, a material long and commonly used in Berlin buildings and present in the ornamentation of the Kollegienhaus. The old and the new, the city of Berlin and its Jewish community are connected symbolically in this choice of material, as well as in the co-joined use of the old building with the new. The metal sheathing, currently still new and unoxidized, is expected to weather into varying shades of verdigris, depending upon exposure.

Within the building Libeskind created what he calls underground "streets," each leading to a different part of the complex, each carefully reasoned as to both the practical and the symbolic purposes of the structures. One street leads to the interior of a freestanding tower (the lighter colored structure towards the left in the top photo), a memorial that Libeskind calls the "Holocaust Void." Entering this uninsulated, non-climate-controlled space, the heavy door closing with a menacing thud, is to experience an instant sense of confinement. The sloped floor has a rough finish, creating a sound like scraping sandpaper as visitors walk about. The acoustics amplify sound, which bounces off the towering, hard surfaces of the angled walls, windowless but for one vertical strip, where light penetrates high up near the top of the structure. It is a space calculated to evoke a disconcerting disorientation, emotionally evocative. At the same time it is an extraordinarily handsome piece of design; in proportions, composition, spatial relations, and textures, its statement is as powerful in its esthetics as it is in its allusive literal context.

Another of Libeskind’s streets leads to an outdoor garden, again on a subterranean level. The E.T.A. Hoffmann Garden, said to represent the exile and emigration of Jews from Germany, is an enclosed concrete space with a 7X7 square of 49 massive pillars, each a planter holding at the top a willow oak tree. All but one of the pillars contain German soil; the other contains soil from Israel. Once again, the below ground base of the garden combined with the closeness of the pillars and the raked angle of the floor forces shifts of perception; this is architecture that denies the possibility of a passive response.

The two Holocaust oriented structures, effective as they are, are secondary to the principal purpose of the building – a museum with a forward-looking perspective, which, by considered reflection on the past, paves the way to a more promising future. Libeskind’s third and most important street leads to a steep stairway, likened by some to Jacob’s ladder (with important Biblical context), climbing up to the exhibition spaces. Due to the steepness, it looks like an endless stair from the basement level at its base; from the top where the last steps lead to a dead-end wall, looking down, the steps disappear from view – there seems to be no turning back.

The series of exhibition rooms on different floors surround empty courtyard-type spaces that Libeskind calls Voids, "embodiments of absence." Sixty bridges crisscross the voids, connecting the rooms, and, once again, creating an architecture of abstract, sculptural quality, with line, space, and form combining into a deeply satisfying composition. The exterior walls are sliced with irregularly placed windows, some linear, some of geometric shape, adding a further element of light and line to the composition in both interior and exterior aspects of the building.

A paradox, perhaps, of Libeskind’s concept is that, while it is full of deliberately, tangibly dramatic effects aimed at disorientation, at the same time the composition is so powerfully controlled and balanced that it provides a counterpoint, an immensely satisfying sensation of aesthetic "rightness." It functions emotionally, intellectually, and spiritually all at once, as great art always does. The Jewish Museum is a triumph for Libeskind’s debut work and a gift of surpassing splendor for Jews and non-Jews alike, for Berliners, and for visitors from the world over, for whom this building has already become a destination of pilgrimage.