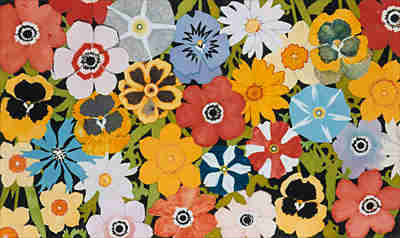 Joe Brainard (1942-1994) said he drew his images from "magazines or TV or landscape or painting by other people. I’m influenced by everything because I’m so aware of everything visually… I can go to a party and remember what everyone wore without being conscious of it, without thinking about it."

Seven years after his death from AIDS-relatedcauses, curator Constance Lewallen has mounted the first retrospective of Brainard’s work. It’s a fascinating exhibition in part because of the play between his period, his biographical background and the works themselves. Brainard ran away to New York from art school in Ohio at 18 when his nude self portraits were banned from an exhibit there. It would appear he never looked back.

New York certainly provided a wealth of imagery for an artist "aware of everything visually." Brainard was attuned to the sensibility of Pop art which coincided with his early New York years. While Warhol and Oldenburg may well have been influences, so too were Gris and Johns and de Kooning. But what came from Brainard’s hand was his own synthesis, his own take on the abundant visual stimulation around him, from the MOMA exhibit Art of Assemblage to Ukrainian religious stores in his neighborhood. And, too, his view, was filtered through a gay sensibility and a well developed sense of irony.

The exhibit includes some 150 works in a wide variety of media. While Brainard aspired to be a great oil painter, the handful of oils here are undistinguished. There are some handsome, rather traditional graphite portraits and a small group of beautifully accomplished watercolors, but the work in which Brainard found special inspiration was collage and assemblage. The "garden" collages are extraordinary explosions of color, created painstakingly by painting each flower, cutting them out and gluing them into patterned compositions.

A series of assemblages are based on the kitschy religious imagery Brainard saw in the Ukrainian and Puerto Rican stores, but the results are not kitsch; he took a step back from the subject matter and transmuted it with vividly juxtaposed materials, draining out its latent sentimentality through a strainer of irony. Thus, a piet� is almost lost in the center of a large assemblage that is drenched in bright green–multiple bottles of Prell shampoo; glittering, emerald-like pendants; roses and grapes and beads, all topped with a store display hand reaching upwards.

As with sculptor Tom Friedman‘s work, these collages and assemblages evidence the most painstaking attention to detail; they are works whose success in part emerges from craftsmanship and precision with processes almost obsessively demanding. Brainard was a superb colorist, but a small and elegant assemblage of buttons and pebbles and pearls mounted on linen shows how effectively he could work in neutral tones as well. There is also a group of works in which paper cutouts are layered on Plexiglas, creating an unusual and intriguing three dimensional effect.

Graphically-oriented works were an important part of Brainard’s output. He designed many book covers, a selection of which are included in the exhibit. He worked with the comic strip form, often with poet-friends who supplied the text. An amusing work is an ink and gouache "calendar,"another skewed look at a popular form, the pin-up calendars that were once common in barber shops and auto repair garages. Here the unarticulated come-on sexuality of the popular work is satirized in the text accompanying each month’s scantily clad nymph.

Brainard was also much taken with Ernie Bushmiller’s comic character, "Nancy," turning the character to his own purposes. In one piece, he depicts Nancy with a broad, knowing smile along with the caption "If Nancy knew what wearing Green and Yellow on Thursday meant"–a reference to secretive gay signaling in the schools at that time. He played with Nancy’s stylized hairdo, picturing her with an Afro or with her stumpy curls morphed into curvaceous lines: "Art Nouveau."

Lewallen suggests that contemporary eyes will see Joe Brainard’s work freshly; the distance of a generation now offers a fresh perspective. Then or now, it would be impossible to deny the pleasures offered by Brainard’s imaginative inventiveness and droll outlook.