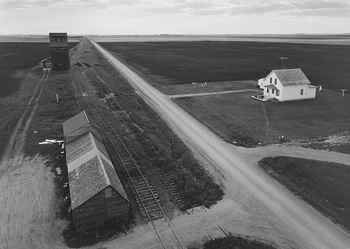 John Szarkowski was the director of photography at New York’s Museum of Modern Art for three decades (1962-1991) which arguably made him the most influential individual in the field of photography during the crucial period when photography itself was finally gaining a rightful status of legitimacy among the visual arts. Szarkowski championed the pioneers (Ansel Adams, Walker Evans) as well as providing younger photographers (Diane Arbus, Lee Friedlander) with the imprimatur of his august institution.

But before his tenure at MOMA, Szarkowski was already a published photographer in his own right and since his retirement he has returned to his original calling, now culminating in the first retrospective of his work, elegantly curated by Sandra S. Phillips of the San Francisco Museum of Modern Art.

It is not a disparagement of Szarkowski’s accomplishment to observe that the exhibit feels like a step into the past. There’s no color here, no outsized prints, no gimmickry. Szarkowski, 80, is, unsurprisingly, a classicist, clearly of the aesthetic of the mid-20th century masters of the art. A landscape like Crooked Lake, Dawn, 1961 surely brings to mind Ansel Adams (if without the heightened drama) and Young Pines in Birches, 1954 could be a direct homage. The portrait Mr. Anderson and son, near Sandstone, Minnesota, 1957 has the same dispassionate objectivity as a Walker Evans. A superb portrait of poet Robert Penn Warren, sleepy-eyed, furrow-browed, dapper in a striped suit, cigarette in hand, makes one wish Szarkowski did more portraiture.

To say, though, that Szarkowski demonstrates the same unsentimental view and concentrated interest in the down-home American experience as that of his admired forebears is not to say that his is not a highly perceptive and profoundly artistic eye. His 1956 book of photographs, The Idea of Louis Sullivan, documents architecture in a human context. The 1954 picture of Carson Pirie Scott in Chicago contrasts the elaborate rococo facade of the retail emporium with a plain wooden crate on the sidewalk. There’s a dressed-up-to-shop mother and daughter standing on the corner; together with the grandness of the store they capture the style of the time. The photograph is a supremely balanced composition made up of strong vertical elements and the sinuous curves of the facade, rendered in subtle lights and shadows. The seemingly spotlighted pedestrians in the lower right corner are counter-balanced in weight by the crate, and a One Way sign adds the tension of a horizontal accent.

The Sullivan book was followed by The Face of Minnesota, a classic documentation of rural America in what seems today a gentler, simpler time. Szarkowski seems especially drawn to the children–whether at church, a carnival, a feast, or a game of street baseball, these kids look scrubbed, well-behaved and, indeed, innocent.

The work since Szarkowski’s retirement includes a series on the cactus and scrub of the dry Sonoran landscape as well as a return to rural America. Perhaps the single most successful recent work is the triptych, Around the Meadow (1996-1998), a masterful combination of images, composition, and textures. In the center panel, a road leads into the distance, bowered by arching greenery in the full bloom of summer. On the left, a small, plain barn with a leafless tree in the foreground, distinctly autumnal. On the right, another barn, this with a flowering tree in Springtime. The changes of season, the transiency suggested by a road to an unspecified destination, the unpretentious, stolid practicality of the buildings set in this natural beauty–all come together with both transparency and welcome complexity.