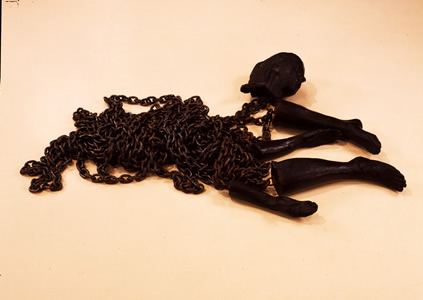 As you may know, there are in several cities around the globe, competing exhibitions of flayed and cleverly posed, plasticized human cadavers, or " life-like posed whole-body plastinates" that are meant to educate by providing an opportunity to better understand the human body. Further, it’s said that these exhibits assist viewers to become "aware of the naturalness of their bodies and to recognize the individuality and beauty inside of them"; as well as serving as riveting and accessible reminders of the fragility of our bodies "in a mechanized world".

As if we all needed another damn reminder of our own mortality. Frankly, the whole enterprise creeps me out.

But right now at the Whitney Museum of American Art in New York there is a different kind of show about bodies – Kiki Smith’s retrospective entitled The Gathering (a wonderful title) organized by the Walker Art Center and curated by Siri Engberg in collaboration with the artist.

I’ll take Ms. Smith’s gathering of fragile creatures any day of the week if I want to see skeletons, muscles, nerves and organs convey anatomical individuality, being "aware of the naturalness of their bodies . . .to recognize the individuality and beauty inside".

In the past when I’ve seen Ms. Smith’s work, it has been either as a single piece in a group exhibition, or isolated by medium – as in an exhibition of her prints or small multiples – or one or two larger sculptural works. While I’ve always liked the work well enough, the segregation of her objects by their medium and their consistent, apparently ephemeral material qualities never registered as being as ambitious as this exhibition proves them to be. I should have been paying closer attention. "A Gathering" is a rare retrospective survey that manages to jolt an artist’s practice into focus, or at least it had that effect on me. Ms. Smith becomes more defined as to who she truly is, a poetically minded, multi-tasking, generative omnivore, fascinated by life and the stories told by things as they simply go about the business of living. Representing the creature body in an almost promiscuous array of materials and media: plaster, bronze, glitter, blood, paper, glass, porcelain, and presented as installations, prints, drawings, photographs, multiples, jewelry, costume design, artist’s books, or as film and video works, even the tattoos she has penned on her own body.

Her art retains and evokes a human-ness in its sweet/sour depiction of homo sapien (and other) forms, and in the hand-crafted quality of the works’ execution. A steadfast but timorous touch helps in releasing harmonics of emotion evoked by the work- suffering, longing, fear, acquiescence, humor and the absurd.

She probably regards Hamlet’s pesky "To be or not to be" question as a false dichotomy. Existence is not an either/or proposition here, but a both/and state of being.

Much has been written about her biography. Kiki Smith’s mother, Jane Lawrence Smith, was the opera singer. Her father was the sculptor Tony Smith.

I once took a studio class from Tony Smith, which I mention only because Ms. Smith’s exhibition made me think of something that happened during one of his classes. He was frail by the time we met and he would deliver his critiques seated, speaking in a quiet rasp that one had to occasionally lean forward to hear. During one evening class, for reasons I can’t remember, he began to recite James Joyce’s "Ulysses", which he had apparently committed to memory. I remember his marvelous transformation as the stream of poetry flowed out of him, complete with brogue, no longer frail, rejuvenated, strengthened by beautiful language, the words transported on breath. The same would be true of her mother’s singing opera. A daughter of such parents couldn’t have escaped that notion of the body as instrument, of corporeal flesh giving rise to transformative and spiritual energies released through word, gesture, expression, imagination and art.

She may have learned her lessons about the body and energy from those who were close to her, but she has taken her expression of it closer to the bone than most, to make work as fragile and steely as we creatures can sometimes be.