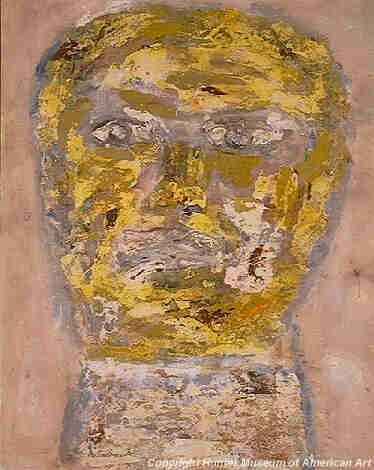 Leon Golub, spanning the half century of his career, has been consistently both a figurative painter and a political painter. He persevered and survived through the long period of the dominance of abstract expressionism in American art and, now at the peak of creative maturity, continues to develop his work both in technique and in complexity.

The Irish Museum of Modern Art has originated a major retrospective of Golub’s work, including thirty-nine key paintings and a large selection of the lesser known political portraits. The show offers an overview of the ways that Golub’s work changed over his long career and it is rich in his most recent works – a stunning culmination of decades of evolving thought and technique.

The earlier works tend to be in a subdued palette, often with forms that seem massive for the space in which they are contained. Golub’s interest in classical and anthropological sources is evident, as well as his experimentation in developing unique textures. He applied pigment and lacquers thickly to the canvas, for example, and then scraped it off, creating a highly textured effect, a distressed look relating directly to the damaged skin he portrayed in politically oriented works. Golub’s work shows a lifelong concern with the violence that humans inflict upon each other. There are references to the Holocaust and the Vietnam war on the macro-level and allusions more personal and individual on the micro-level – he has used sado-masochistic pornography as a source of some images.

Golub’s interest in larger scale works was evidenced early on. "Gigantomachy II" is a 1966 canvas some ten feet high by 24 feet wide. The title refers to mythical battles of the Greek gods; Golub’s eleven male figures are nude, nearly faceless, muscular, and energetically, physically engaged, sprawling in complex composition across the huge canvas.

In later works, Golub moved from such generalized figures to more specifically identified figures – uniformed, for example – to more explicitly state his political concerns. Another large scale work, "Interrogation I" (1981), shows two soldiers in the midst of clubbing a nude prisoner suspended by his feet, his vulnerability acutely focused in the exposed genitals which are in the very center of the composition. "Interrogation III" from the same year is a variation on the theme, with a woman the victim of violence. These are powerful and disturbing works, not easily forgotten.

The most recent canvases are less literal, more complicated in their use of imagery, graffiti-like words and phrases, empty spaces. They have an almost riddle-like quality – suggestive, elusive connections amongst the recognizable elements. A Prometheus series draws on Greek myth, of course – the hero who defiesthe gods and is punished by being chained to a rock with an eagle tearing at his liver. Add some rather sardonic phrases and a streak of blood red; it’s a starting place for multiple interpretations. Other canvases employ favorite Golub images: barking dogs, lions, sphinxes, skulls.

The influences and the sources upon which Golub draws are diverse; the body of work he has produced is extraordinary in its individuality, the unique quality of its focus, and its unusual synthesis of a pronouncedly moral/political view with a thoroughly contemporary esthetic.