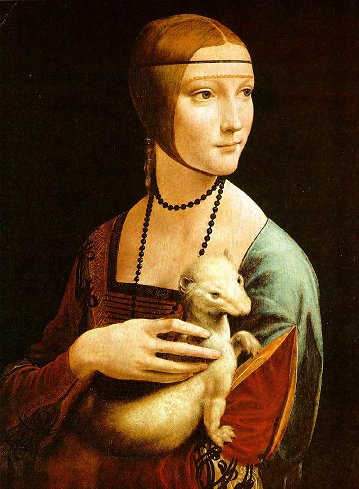 Ginevra de’ Benci, Lisa Giocondo, and Cecilia Gallerani are all major stars: they are the subjects of the three extant portraits of women by Leonardo da Vinci. All three women, needless to say, were from the upper classes–who else could afford to commission such portraits?

Ginevra, now in the National Gallery in Washington, DC is the sad one of the three, pensive, her mouth downcast, almost in a scowl. Her’s is a wedding portrait. Lisa, of course, is in the Louvre in Paris. She presents a different mood–the famous mysterious smile emanating a rather sedate sense of self-satisfaction. And (let’s be honest here) she’s been replayed so often that viewers are pretty much numbed to the genius of her portrait. Neither of these ladies does much traveling these days.

But Cecilia, chronologically the second to be painted, is surely the most beautiful of the three. She was neither a wife nor a betrothed, but the mistress of the Duke Lodovico Sforza. She’s not yet twenty, older than Ginevra, probably younger than Lisa at the times they were painted. Cecilia has been caught in a moment when her attention was diverted by something off to her left; the ermine she holds looks in the same direction. That engagement of the subject beyond the picture frame, the scholars say, was a revolutionary change from the focused formality of earlier portraits.

Ceciliaradiates an energy, a liveliness, an intelligence that make her by far the da Vinci woman one would have liked most to know. But seeing her generally takes a bit more effort, for the current home of the portrait is the National Museum in Cracow, Poland, a less common destination than Paris or Washington. For a while, though, she is the centerpiece of a touring exhibition of art from Polish collections, now at its final stop in San Francisco. She’s the kind of lady who would dominate most any room she was in, and, indeed, she dominates this exhibition. Still, there are other treasures to behold and some history to be learned here.

Poland lies at the geographical center of Europe, which seems to have been as much a curse as a blessing. Its history contains, on the one hand, periods of wealth accumulated through international trade, a pluralistic society, and significant patronage of the arts. On the other hand, the country has been subject to frequent wars and redrawing of its borders as a result of incursions by the Russians from the east, the Germans from the west, even the Swedes from across the Baltic Sea. Art collections, too, were repeatedly built and disbursed, following the political and military vicissitudes of Polish history, with the darkest period no doubt the pillaging by the Nazis during World War II.

There are a handful of names readily recognized amongst the artists represented in the exhibit. In addition to da Vinci, there’s an Ingres study, a handsome Memling triptych of The Last Judgement (which has a colorful history of its own), a painting of John the Baptist by the Spanish Baroque painter, Ribera.

There’s also a Portrait of an Old Woman by the 17th century Dutch painter, Ferdinand Bol, a work understandably once attributed to Rembrandt. Against a neutral background, this old woman emanates an inner glow, her furrowed brow and the stern look in her eye tempered by the suggestion of a smile. Also from the 17th century Dutch, there’s a fascinating still life on the subject of mortality attributed to the painter Simon Luttichuys. It displays an arrangement of a skull, a globe, medical texts, etchings and paintings, as well as a suspended glass ball in which is reflected the painter at his easel.

Works of Polish painters not only attest to some fine home-grown talent, as it were, but also provide glimpses into the life and history of the Polish people.A late 16th century portrait of a highborn young woman by M�ller is a bit stiff with the conventions of the day, but the elaborate gown, jewels, ruff, and cap are rendered in exquisite detail. Wincenty Kasprzycki’s Exhibition of Fine Arts in Warsaw (1824) depicts a gallery with paintings covering one wall and a crowd of viewers (some being portraits of the artists), mostly men. The work brings to mind the American Samuel F. B. Morse’s Gallery of the Louvre (an equally mediocre piece of art) in its imagery, but where Morse was creating his work for dubious propagandistic purposes, at least Kasprzycki has documented an artistic event of his time.

Jozef Simmler’s 1860 Death of Barbara Radziwilowna pictures the death of the second wife of a 16th century Polish king. The dramatic history of their relationship provides fertile ground for the romanticism of the 19th century. The painting is saturated with a sense of loss and grief–the queen was only 31 years old. Aleksander Gierymski’s Feast of Trumpets (1884) is a beautifully wrought realist painting that depicts the ritual washing away of sins by Jews on Rosh Hashana. Placed on the banks of the Vistula River in Warsaw, the artist masterfully controls the fading light of dusk, reflections in the water, and the complex compositions of praying figures, boats, buildings, and landscape.