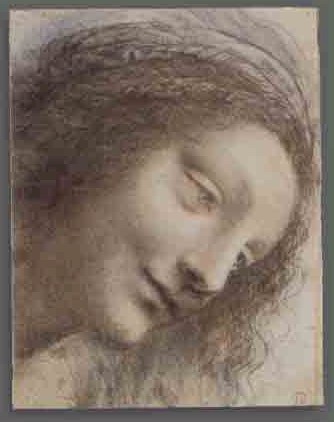 There is only one painting in the Metropolitan Museum of Art&#146;s Leonardo da Vinci: Master Draftsman show: "St. Jerome Praying in the Wilderness." It belongs to the Vatican and is unfinished. The exhaustive catalog for the show describes Leonardo&#146;s techniques, the methods used to analyze these techniques, and the work that has been done to date to conserve this piece. It is interesting to know how Leonardo primed a painting surface and helpful to learn more about whether this painting belongs to Leonardo&#146;s first Florentine period (1478 to 1483) or was painted after he left for Milan. But the catalog can&#146;t quite get to the mystery of this painting: how, in its incomplete state, it looks strangely modern, with the humanity of St. Jerome&#146;s gaunt, toothless face at its center.

This singular painting is not out of place in the current show, which makes an unprecedented number of drawings available to the American public for the first, and possibly the last, time. Thousands of Leonardo&#146;s drawings survive, but are rarely seen because of their sensitivity to light and changes in temperature. Carmen C. Barmbach, a curator in the department of drawings and prints at the Met, began organizing this exhibit in 1996. One argument she made to various museums and collections, where owners were understandably reluctant to risk damage to their drawings, was that this offered a unique opportunity for new scholarship. The argument must have proven effective, because the show&#146;s extensive catalog will surely become one of the field&#146;s definitive works and is a beautiful record of one of this year&#146;s most fascinating shows.

Leonardo drew constantly, always exploring, manipulating, discarding, correcting, and always seeing from new angles. And, it seems, he drew everything. He drew babies, cats, saints, soldiers, weapons, storms, grotesque human faces, people arguing, cadavers, horses, buildings, and battles. On some pages, there are fascinating juxtapositions that reveal brief glimpses of his thoughts. What may be a sketch for "The Last Supper" is drawn on a page with unrelated architectural and geometric designs. On another, an infant holds a lamb near a grotesque head and some technical studies.

In the introductory gallery, work from Leonardo&#146;s teacher and his circle provides insight into how Leonardo first learned to draw. From this teacher, Andrea del Verocchio, Leonardo first learned the technique of sfumato, drawing so that "your shadows and highlights fuse without hatching or strokes, as does smoke." This technique was once entirely credited to Leonardo; it would now seem that del Verocchio deserves more credit than was previously given. From del Verocchio&#146;s workshop, Leonardo also learned the techniques of quickly sketching figures from different points of view and measuring the proportions for drawing horses.

One of the most charming pieces in this show is a page referred to as Cats and a Dragon. Leonardo watches cats hunt, fight, and nap, drawing them in each pose from various angles as though to capture all their possible motions. And in the midst of these real-life cats, a small dragon appears, slinking down the page. The page of botanical studies showing Star-of-Bethlehem, grasses, and another genus is eye-crossing in its obsessive detail. Seen as studies for a composition of Leda and the Swan, it becomes even more interesting: in these drawings, Leonardo created the picture&#146;s world from the ground up.

Another notable work here is a red chalk drawing of a soldier&#146;s head, part of the studies for an ill-fated mural, the "Battle of Anghiari." This mural was a commission for the Sala del Gran Consiglio of the Palazzo della Signoria in Florence. Michelangelo was to have painted the opposite wall. Leonardo created some studies for this work, many of which are collected here for the first time. When he painted the only section of the mural that he was to work on, he used an experimental technique that caused the colors to run with the heat of the fire he used to dry them. There have been a variety of copies from this original composition, including this show&#146;s drawing by Rubens, which allows scholars to analyze how the sketches might have been used.

In an age of "personality journalism," it is almost refreshing to know so little about Leonardo as a person. He began his life with some disadvantages: an illegitimate child in a small town, left-handed, with an education that was mediocre at best. And yet his contributions — as artist, scientist, inventor, thinker, and teacher &#150; are staggering. More than 350,000 people came to the Met to see Leonardo da Vinci: Master Draftsman, causing the venerable institution to extend its hours during the show&#146;s final weekend and making this the most-attended drawings exhibition in the museum&#146;s history.