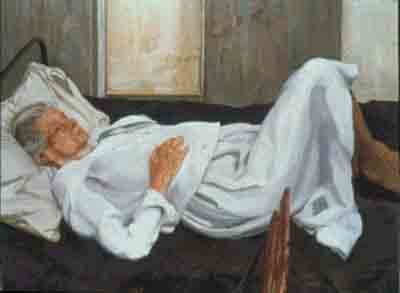 The Museum of Contemporary Art

The Lucian Freud retrospective is a rich display of the artist’s accomplishment ranging from his earliest works in the 1940’s to the present. For those know Freud as a painter of aggressive, striking, but often uninviting nudes, this collection displays a greater breadth of vision. There are the spent nudes, of course, corpulent or emaciated with detailed genitalia that do not begin (and have no intention) to seduce. But there are also wonderful botanical pieces, such as a portrait of cyclamens painted in 1964, and portraits that reveal the soul of their subjects, including many paintings of his mother. All are introspective, descended in spirit, perhaps, from the work of his grandfather, the psychoanalyst Sigmund Freud. He paints about essence, not resemblance, yet the resemblances to figures one recognizes are striking, the most recently completed being the much touted portrait of David Hockney, no longer a boy, no mischief left in the eyes.

The early pieces are meticulously constructed, each brush stroke providing definition. The effect is documentary, such as in the view from his studio window entitled, "Wasteground with Houses," 1970-2. Freud dazzles as a draftsman but does not distinguish himself in these early works much beyond his technical virtuosity. Painting at a time that was dominated by the abstract expressionists, he was a master realist devoted to telling a story. As the painter matured, his strokes coarsened and loosened, gaining in expressiveness what was lost in the way of meticulous detail. His palette is somber and the subjects are not joyful; it is his virtuosity and artistry that are uplifting.

Unlike a typical museum show, the paintings are hung at eye level, or slightly lower, bringing the viewer into intimate, if uncomfortable, contact with the subjects. If there is a complaint to register, it is that the description placards are stacked to the side at the end of each wall, and it often hard to match placard with painting.