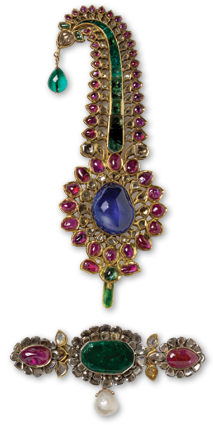 The San Francisco Asian Art Museum’s new show, “Maharaja: The Splendor of India’s Royal Courts,” shines a light on three centuries of the Indian subcontinent’s rulers with some 200 objects, many culled from London’s Victoria and Albert Museum, where the show originated.

The subcontinent consisted of many separate kingdoms, each with its own royal family. “Maha” means “great.” “Raja” means “king.” Some of the kings were probably great, some not. The show, however, is breathtaking.

The objects range from large to tiny. A silver coach—silver, as in sterling, made in 1915 and drawn by horses—occupies a niche of its own. An “elephant throne,” a saddle-like howdah meant to be borne on the back of an elaborately decorated elephant, is also heavily bedecked with silver. A much smaller treasure is a “writing set” made of jade decorated with emeralds, diamonds, and rubies. Every accessory—for example, a small box for holding spices (left)—is embellished with silver and gilded silver peacocks. One can’t help thinking that the royals themselves were peacock-like, or at least skilled practitioners of the art of conspicuous consumption.

The first image that greets you when you enter the show, which takes up all three of the museum’s ground-floor galleries, is a large 18th-century portrait of Maharaja Amar Singh II, ruler of Mewar, who wears a halo and a fortune in jewelry and carries a flower in his hand. The halo, of course, represents the king’s near-holy stature; the flower represents his devotion to the arts, which was expected of a ruler. His other duties, of course, included defending his kingdom. The maharahas’ manliness and power are represented in the show by a variety of weapons and armor (all lavishly decorated, of course) as well as scenes of hunting.

The hunting scenes are small, exquisite paintings in opaque water colors, some touched with gold. More to my liking are the watercolors of court scenes—royal processions, household scenes (some, like little Medieval paintings, showing different rooms in a palace, in eccentric perspective), even intimate, erotic views. Some of the animals, as in a painting titled “A Ruler Examining a Horse,” have soulful eyes. The people, often shown in profile, all look identical. One room-length scroll from the 19th century depicts the procession of the ruler of Mysore and includes hundreds, maybe thousands, of figures in incredible detail. A 21st-century illustrated text above the scroll interprets what we’re seeing.

Then there are the fabrics: a tent hanging embroidered with gilded thread, saris as gossamer as spider webs (if spider webs were trimmed with gold thread). The most ornate items of clothing are reserved for the males of the court: immense, floor-length gowns, embroidered with flowers in gold and silver thread, for both men and boys.

Which brings me to the jewelry. How about the seven-strand necklace of graduated pearls, trimmed in diamonds? That’s for a man too, of course. One oil painting shows a royal wearing such a necklace, of pearls, gold, and diamonds.

In the 20th century, the well-known Paris firm of Cartier manufactured many precious items for said royals: cigarette cases and holders, brooches, watches. The most stunning piece is the 1928 Patiala necklace (right), which originally contained, among other stones, 2,930 diamonds, including the 235-carat yellow DeBeers diamond, the seventh largest in the world. The necklace was “reconstructed” in 2002, using synthetic rubies in place of the real ones. I don’t know about the DeBeers diamond. This piece, too, was worn by a man. Much of the jewelry was associated with a person’s status or religion. Gold, for example, could be worn on the feet by royalty only.

I haven’t said much about the larger paintings, such as “The Delhi Durbar [royal assembly] of 1903,” commemorating the accession to the British crown of Edward VII. It’s truly impressive.

You can’t ignore the period’s politics, which are explained in the show’s wall panels. Briefly, the different kingdoms and dynasties struggled with each other while, by the mid 18th century, the English East India Company had developed from simply a trading company into a major force. British power increased; by 1877, Queen Victoria was declared Queen Empress of India–an area that became known as “the Raj,” and “the jewel in the crown.” Some of you will remember the PBS series by that name.

Another familiar name is Mahatma Gandhi, leader of the 20th century’s self-rule movement, which resulted in Indian independence in 1947. Although “Maharaja” doesn’t feature any Gandhi memorabilia, the 20th century is represented by stunning pieces of art deco, which became popular as India looked westward. Some of the furnishings were made in Paris or Berlin. Many of the royals studied in England; some had themselves photographed in western dress; one is even commemorated in cricket garb, holding a cricket bat. Man Ray, an American artist who spent most of his career in Paris, photographed India’s beautiful people in the 1930s.

Which brings us close(r) to the present day and the museum’s commission of Pixar animator Sanjay Patel to create the lively, delightfully colored logos for the show and the museum’s exterior decorations–all in line with the Asian’s reinvention and “rebranding” of itself to gain new (and younger) visitors.

Some of these–the fifth-graders of San Francisco’s Sherman Elementary School, to be exact–have created charming self-portraits in a royal vein. See them in the Educational Activity Room on the ground floor. And don’t miss the museum’s gift shop, the best museum shop in the Bay Area.

If I could take a gift for myself from the Maharaja show, it wouldn’t be a bespangled sari or an ornate bibelot. I’d take the Royal Seal Ring, created in the 19th century and re-set by Cartier about 1930. It’s very simple, with an emerald subtly engraved with the seal of Maharaja Ram Singh II of Jaipur, set in gold. It’s in the first gallery.