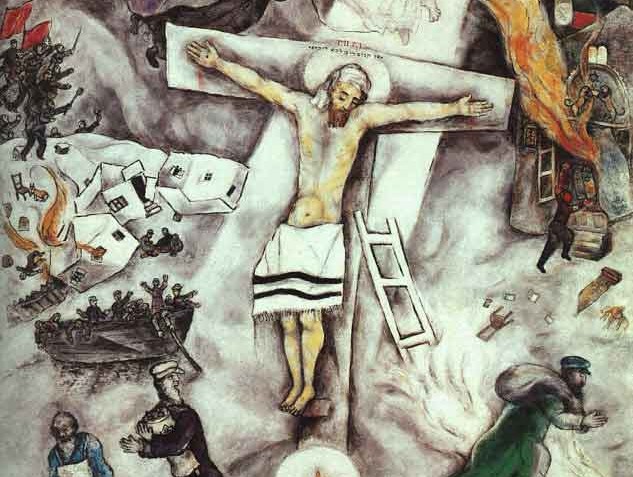 A major Chagall retrospective is approached with some trepidation. One of the most accessible artists of the 20th century, Chagall’s images have been widely disseminated, in part due to his own exploitation of his popular success. Over a long career, his almost exclusively joyous paintings and works on paper, always with a figurative bent, often tinged with sentimentality, were produced and reproduced, including his own production of large edition graphics in his later years. His murals grace the Metropolitan Opera House in New York and the Palais Garnier in Paris, and his stained glass windows bejewel the Hadassah Medical Center in Jerusalem.

Overexposure, needless to say, can engender a certain numbness in the observer, a saturation of repeated imagery that thus loses the power to engage either the intellect or the emotions. To compound the problem, Chagall was not a painter who kept changing, evolving his style and technique, growing in new directions. Having absorbed bits and pieces of his contemporaries’ styles (Cubism, Surrealism, Expressionism) he found his own visual vocabulary fairly early on and stayed with his allegorical themes throughout his career. Partially abstracted, but always recognizable figures drawn from biblical stories and Jewish tradition in the Russian shtetl are placed in flattened space and frequently distorted proportions. Couples float through the air over village townscapes.

The challenge, then, of a major retrospective is to stimulate a revaluation, a fresh perspective on ingrained impressions. The current exhibit does not succeed in completely winning over the jaded viewer, but it makes undeniable inroads. There are some surprises here, some unexpected variety that rekindles interest and respect.

A roomful of outsized pieces from Chagall’s work for the Moscow Jewish Theater are masterful in capturing both the joyous spirit of theater and the Jewish tradition of this particular theater. Music offers a Cubist-influenced image of a bearded fiddler, wearing his tallis (prayer shawl) and grinning as a boy floats in the sky above his head and his feet graze the roofs of the village below. Dance shows a peasant woman clapping her hands over her head as she steps out, the serpentine curlicues of the pattern of her dress emphasizing the movement and rhythm of the dance.

It must be asked how an artist, particularly an artist of pronounced Jewish identity, could live through the horrors of the 20th century — pogroms, two World Wars, the Holocaust — without those trauma profoundly reflected in his work. There are a few works here that establish that Chagall was not unaware. The old man in the early (1915) oil, The Jew in Red, is unsmiling, the lines and folds in his face showing the weight and perhaps the sorrow of experience and age.

On a larger scale, White Crucifixion, a large 1938 oil, shows Jesus on a cross–not the usual Christian cruciform, but a truncated, T-shaped cross; his loin cloth is a prayer shawl. On all sides there is frenetic activity: a Red army attacking, a burning synagogue and village, a man carrying away the holy scroll of the Torah, people fleeing in a boat, elders floating above, covering their eyes in dismay at the horrors below. Always acutely aware of himself as a Jew in a Christian world, Chagall has here appropriated the Christian mythology, presenting Jesus as a Jewish martyr who suffered persecution even as all Jews so suffer.

Another of his Biblical subject canvases, The Fall of the Angel, also shows Chagall in a serious, non-joyous mode. But still, for the most part, Chagall’s oeuvre expresses the positive, joyous side of life. That pleases a wide public and they are expected to come in droves to see this exhibit at its only American venue; they will not be disappointed.

The skeptics, on the other hand, will not likely experience a major conversion, but they will be hard-pressed to deny the pleasures offered by an artist who confidently danced to his very own fiddlers.