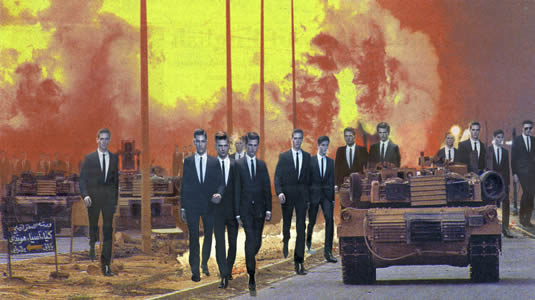 Martha Rosler’s concise show at Mitchell-Innes & Nash, Great Power, encapsulates the weird state of our country, facing extremes of peace and war, prosperity and poverty. The most powerful element confronts the visitor straight away: a Dance Dance Revolution machine sits across from the gallery’s entrance, which is accessed by a 25¢ turnstile. Take your choice: escapism or reality. (You must pay, but the money goes to charity. Although I saw one guy jump the turnstile.)

In a series of photomontages, battle scenes from Iraq and Afghanistan are layered with chic fashion models. In Invasion, a resolute band of high-cheekboned, black-suited men crowds a tank in front of a wall of flames. Two works feature women in evening gowns; one glances away from a tank squadron pointing its guns at citizens. The other whisks away a drape to reveal a sobbing woman in a dusty, alley patrolled by soldiers.

In Prospect For Today, two men bonding over their prosthetic legs stand near a vast red sofa, a gas pump, and two grieving women, and before a terrifying blazing battle scene. Prototype (Freedom is not Free) is a giant suspended prosthetic leg – technically beautiful, with elaborate hinges, painted with images of stilettos. Over her impressive career Rosler has used all kinds of media. Here, a dvd shows a puppet with a prosthetic leg repeating a trumpet rendition of “God Bless America”; several digital prints depict bookshelves of “Utopian Science Fiction” and “War and Empire” titles, and volumes of clips of current events provide context. The last time Rosler used photomontage in earnest was during the Vietnam War, to which she compares the current war/s. Plus ça change…

Jane Russell’s When You WishJane Hammond’s Photographs at Galerie Lelong is her first exhibition dedicated to photography. Recent installations featured a powerful human touch – a carpet of lifelike leaves represent the war dead; butterflies alighting on maps made of sculpted paper. The craftwork combined with the subject matter to deliver a supreme poignancy.

Hammond’s new work, incorporating found photos, is made digitally and then printed from negatives. It’s witty, funny, and simultaneously credible and ludicrous. And apart from the incisive irony and composition, the human hand is invisible. An art class sketches a nude family of three balancing in an impossibly acrobatic pose; a tenement building seems to be occupied by a circus sideshow; a bridal couple (Hammond and Elvis) walks an aisle lined with dessicated corpses; two Navy Seals in a moat spy on a bunch of alligators. She also shows source photographs with her own image inserted, arranged in large grids.

Straightforward photography shows can leave me indifferent, but these two artists maximize the genre’s potential by experimenting with context and juxtaposition. They strike different, yet distinctly resonant, chords.