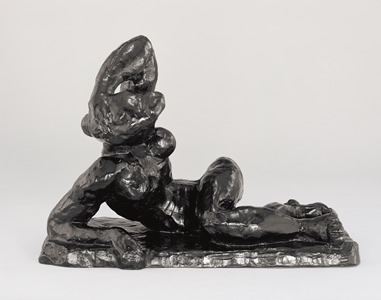 Every artist has to deal with the fact that certain parts of his or her work will occupy center stage while other parts gather dust in the wings. Stravinsky’s big 3 ballets get played, but why do his other equally great pieces go unheard, for aren’t they just as worthy? Matisse has suffered a similar fate. Many of his paintings are deservedly iconic, but his sculpture’s barely known. The Oxford Dictionary of Art admits almost dismissively that “Matisse made sculpture at intervals throughout his career”, which makes it seem like he only sculpted when he wasn’t painting.

SFMOMA’s “ Matisse, Painter As Sculptor” — here till 16 September, and at The Baltimore Museum of Art 28 October 2007 – 3 February 2008 — aims to correct that view by showing all the media he worked in, save the stage, along with that of other artists he was influenced by, like Cezanne, as well as those he influenced or with whom there was a mutual influence, like Picasso, Giacometti, and Maillol. It’s a major opportunity to reassess the work of a miraculously gifted artist who moved between different media as if they were different rooms in the same house. An added bonus is the San Francisco connection he formed with collectors Sarah – his portrait of her is here – her husband Michael Stein, his great writer sister, Gertrude, her devoted companion, Alice B. Toklas, who grew up in a house within sneezing distance of The Mitchell Brothers Theatre and AMC 1000, and her next door friend, Harriet Levy, whose bequest includes several pictures here.

A common theme in Matisse’s sculpture is struggle – a Capricorn specialty – which Stein emphasized in her groundbreaking 1909 portrait, “ Matisse. “ The artist admitted as much when he said that “ the surface ( of my sculpture ) registers all the marks of the act of modeling, rebuffing our eyes’ caress in order to stress the primacy of architecture. “ This thoroughly modern view that art should question received ideas of how it should look seems to be at odds with Matisse’s almost infamous remark ( that ) “ I dream of … an art of balance… ( of ) something like a good armchair in which one rests from physical fatigue. “ And the tension between these two statements about art that’s blunt and art that’s beautiful runs through many pieces here.

It’s there in the smoothly painted yet “primitive” looking The Blue Nude: Memory of Biskra ( 1907 ), which once belonged to Stein, and in the dimpled surfaces of Reclining Nude ( Aurora ) ( 1907), which Matisse worked on at the same time. These tensions also appear in the deeply ambiguous Two Negresses ( 1907-08 ), which has of course been read as lesbian. But closer inspection – it’s not enclosed in a Plexi box – lets one feel it as a kid of commingling of “opposites”. The same head, posture, and body can be seen as female and / or male from different angles, views. The ethnographic photograph, which hangs opposite, shows how far Matisse has travelled from his source.

His variation sets are equally fascinating. The Modern has two of the best known in the same gallery – the truly monumental over 6 feet high The Back I – IV ( 1903-1930 ) – faces the portrait busts Jeannette I – V ( 1910 – 13 ), and both command the room. The Back examples Matisse’s frequent obsession with simplification of form – he’s almost pre Minimalist in this regard like Minimalist sculptors Mark di Suvero and Richard Serra – while Jeannette goes from looking almost classical Roman – I and II – they’re mounted on bases – to exaggerated close-ups of different parts of the same face in III and IV. Gender and perceptual ambiguities abound. What’s fleeting’s stable, and what’s stable fleeting, especially in V, which looks masculine from the left, and like a working class femme de ménage from the right, and a cut-out silhouette too. What’s seen is not seen, and what’s not seen seen.

Matisse presents these “opposites” as two sides of the same coin – everything changes as we look – and his experiments with anatomical distortion / re-arrangement are about this too. His bronze Large Seated Nude ( 1922-29 ), dates from his Nice period during which he produced some of his most famous paintings – Stein and Toklas’ Baltimore friends, the Cone sisters’ The Yellow Dress ( 1929-31 ) is here — as well as drawings of the female form, seen from angles both logical and not, and his model’s pose in Large Seated Nude mirrors that in the crayon transfer lithograph, Nude With Blue Cushion ( 1924 ), with the armchair supporting her there removed. But her poise remains intact despite the gravity of her situation. And who but Matisse could pull this off with such élan ? Yet he isn’t just a quintessential French master devoted to visual pleasure and classical restraint, but one who always challenged, changed.

We tend to take the great for granted. Picasso’s this way, Matisse that. But this show trumps these easy assumptions by presenting Matisse complete. The marvel is that his work here looks fresher than just about anything done today. It’s accessible, but also mysterious, like anything true.