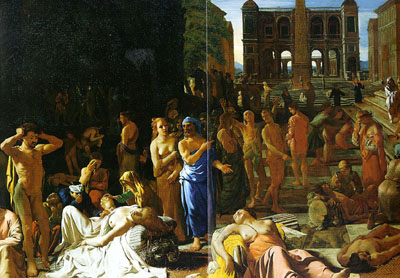 Think of Flemish master painters of the 17th century; Rubens and Van Dyke quickly come to mind. But Michael Sweerts? Sweerts was born Flemish and so is labeled Flemish, but he’s considered to be an "outsider," never having aligned himself with a particular school. There’s very little direct information available on his life. This exhibition, a joint project of the San Francisco Fine Arts Museums, the Wadsworth Atheneum Museum of Art and the Rijksmuseum, involved curatorial efforts to search for additional original documentation.

Sweerts lived and worked in Italy for a decade (as did other Northern European artists), including work for the court of Pope Innocent X, and he also spent a time in Amsterdam. Towards the end of his life he journeyed to the Middle East and India, in part as a Catholic missionary.

The number of known Sweerts works is also very limited, so to have some three dozen paintings (and half of his known etchings) together in one exhibit is a rare treat. The range of works includes portraits, genre, and historical paintings, as well as his complete series, "The Seven Acts of Mercy."

It is in the portraiture and genre paintings that Sweerts achieves his greatest success. While he painted the rich (a guy has to eat, after all), he was also interested in old people, peasants, and working people and he depicted them with dignity and compassion. A pair of early portraits, "A Man Drinking," and "An Old Woman Spinning" show the promise of what was to come. Against a black background the old woman looks directly out at the viewer; her spinning tool slashes a diagonal across the canvas, its puff of wool balances the composition. She projects a sense of calm, of being at peace with the world.

Ten years later, the Portrait of a Man Holding a Skull(believed to be a self-portrait) is more emotionally complex, the man with his head turned over his shoulder to look out at the viewer, something somewhat dissipated in his look. His forefinger pokes into the nose of the skull. The skull is often used as a symbol of man’s mortality and this somewhat ambiguous gesture might be read as defiance of the transiency of life, or perhaps, that which threatens life; Sweerts did live through times of famine. In this painting, too, Sweerts used a lighter background to contrast with the black hat and coat the subject wears. (Curators point out that Sweerts often used cheap pigments, so often his backgrounds have grown dark and murky over the years.)

The Young Man and the Procuressis a small gem, an oil on copper measuring only 19 by 27 cm (about 7.5 by 10.6 inches — smaller than a standard piece of letterhead). The smooth-skinned young man (with weak lips, a tentative mustache, and a strong nose) looks the procuress in the eye. She’s old, craggy, with a beaked nose and a pointy chin; give her a broom and she’d be perfect for Halloween. She has her hand confidently on the young man’s shoulder, on his elegantly brocaded sash, and she’s no doubt selling him a bill of goods for his illicit pleasure. This tiny painting overflows with character and drama.

On the other hand, one of the major pieces in the exhibit is something of a disappointment. "Plague in an Ancient City" was purchased (with fanfare) at auction in 1997 by the Los Angeles County Museum for $3.85 million. Given the rarity of Sweerts’ work and the grand size of the painting, the price can be understood. Placed in a classical settingare some two dozen figures in varying states of dress and undress and in varying poses. In the foreground, two female corpses are recumbent and other corpses are strewn about. There are mourners and posers. The composition is dominated by a strong lower-left to upper-right diagonal.

Sweerts was a specialist in the human figure and even ran an art school with life classes in Brussels at one time. The individual figures in "Plague" are masterful. The problem is that, despite the strong composition, it doesn’t all come together. The lighting is highly theatrical and doesn’t make much logical sense, but, more importantly, these figures are not sharing an emotional place as they are sharing a physical place on the canvas; they remain a collection of largely unconnected figure studies. (The same might be said of the collection of nude male bathers placed in a landscape–the latter painted by someone else.)

But then the exhibit closes with a group of late portraits and in these Sweerts’ genius is undeniable. In the Head of an Old Woman, for example, she is toothless but smiling, a twinkle emanating from her hooded eyes. The Boy with a Hat is focused on the eyes; his head is turned as he intensely looks off to his right. Sweerts not only has painted elegantly in these works, but also with solid perception and rich characterization. These works are suggested as antecedents to similar works by Vermeer which came five to ten years later. That’s high praise, indeed.