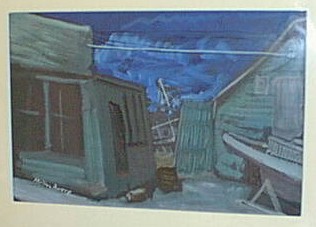 At the beginning of his career, when he lived in Connecticut, Milton Avery (1885-1965) was influenced by American Impressionists–Inness, Lawson and Twachtman. But when he moved to New York in 1925 he was exposed to a wider variety of contemporary work and his work became more abstract, though always remaining recognizably representational. Matisse was a strong influence on him and, in turn, his brilliance as a colorist influenced a generation of Color Field painters.

The current show at the George Krevsky Gallery affords an opportunity to see a group of Avery works in oil, gouache, watercolor, pencil, and ink, as well as etchings and woodcuts. Whatever the medium, the works are unmistakably Avery’s–in their play of color and pattern, in their choice of subject matter, and in a positive, joyous response to the world around him. Avery must be the most angst-free of the modernists. That spirit, along with the utterly unpretentious charm of his work should not be mistaken for a lack of seriousness. He was a dedicated practitioner of his art, working constantly through his life and producing a large body of work.

Avery was also independent. When abstract expressionism came to dominate American art, capturing the critics and the trend-followers like a pied piper, Avery continued to play his own pictorial tunes, following his own muse. Long out of fashion, the style pendulum ‘s return to interest in representational art moves Avery back into the spotlight.

There are two early watercolors from the 1930s, Tweed Coat and Nan in an Apron, both figures of seated women. The former has a sly charm, her wide-brimmed hat covering her eyes, her black shoes an exclamation point against the otherwise subtle colorings. The presence of the artist is manifest in the strong cross-hatchings that form the background and play off of the plaid of the coat. Nan is brighter, in her red-patterned apron and green blouse; Matisse’s presence is palpable.

In Fishing Shacks, a gouache on black paper, Avery is reaching for new effects in the saturated look of the colors that the dark paper enhances. The strong sea-greens of the massed shanties are set at an angle that leads the eye to the rich blue of sky (and implied sea) with a mass of clouds suggested by whites applied with movement-filled brushwork. It suggests a storm coming, but not a threatening storm–Avery is at peace with nature.

The Horse Grazing, too, has some lowering clouds (here in oil), but neither do they disturb the peace. The stumpy tree in the foreground contrasts with the full flowering tree in the center, mid-distance, but even it puts out new leaves, suggesting the cycle of nature. The horse and, indeed, the style of the whole are reminiscent of American primitives, but Avery’s understated mastery of light, line, and mass here is anything but primitive. The powerful sweep of the central diagonal axis is softened by the curves of hills, trees, and equine musculature, as well as Avery’s usual mastery of color (miserably distorted in the digital photo to the left).

Avery’s subject matter was from the domesticity of his day-to-day life–his family, their vacations at the beach, nature; without subverting the representational, he distilled their essences into compositions of form, shape, color, and pattern no less than did his successors. Ironically, he was a close friend of Adolph Gottlieb and Mark Rothko, both of whom were influenced by his work and both of whom became important figures in abstract expressionism, while Avery stayed his independent course.

At Avery’s death, Rothko said: "He…always had that naturalness, that exactness and that inevitable completeness which can be achieved only by those gifted with magical means, by those born to sing… Avery was a a great poet-inventor who …invented sonorities never seen nor heard before."