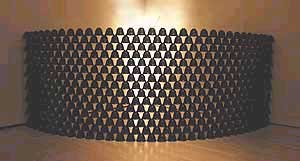 Renunciation is not getting rid of the things of this world, but accepting that they pass away.

Thai artist Montien Boonma (1953-2000) knew all too well the transient nature of life itself. His wife died young of breast cancer and he died six years later of a brain tumor and lung cancer at the age of 47. Boonma sought solace in his Buddhist beliefs and practices, expressing in his art–a blending of Eastern and European aesthetics–the tension between suffering and acceptance, between the temporal and the eternal. The results are works of exquisite subtlety, poetic sensibility, and a refined, deeply felt spirituality. They are also an art conservator’s nightmare, since Boonma frequently worked with perishable, often organic, materials.

Temple of the Mind, a small, carefully selected exhibition of Boonma’s works organized by the Asia Society, reveals just how complex a minimalist approach can be, how the expression of the profoundly supernal through earthly substances accentuates the constancy of the former, the impermanence of the latter and the inevitable convergence of the two.

Several large scale works dominate in this presentation. House of Hope is an installation constructed of multiple strands of prayer beads made of herbal medicine balls, hung in rows from a steel grill over a painted platform accessed by several steps. The surrounding walls of the gallery are covered with abstract murals made from herbal powders and meant to evoke the stains on temple walls that accumulate from the smoke of burning candles and incense. The combined scents wafting about this installation add an unexpected dimension to it, enhancing the sheer sensuality of the work. Alluding at once to religious ritual and to the ephemeral nature of material things (and, by extension, of life itself), House of Hope confronts multiple contradictions. While the openness of the many strands seems to invite entry, their massing seems to discourage it. Materials that are fragile have been worked in elaborately painstaking and repetitive detail. The work is at once a memorial to Boonma’s wife, a sanctuary, and art that is deeply felt, but carefully modulated in an understated expression of grief, meditation, and transcendence.

In contrast, Temple of the Mind: Sala for the Mind is a far less porous installation made of rough-hewn wooden boxes stacked high to create a round structure that narrows as it rises, a bell tower that is reminiscent of the architecture of various Thai and Khmer ritual spaces. The boxes are filled with aromatic herbs and spices, mixing aromas that seem blended of eucalyptus, sandalwood, curry and camphor. The boxes are painted in a variety of subtle shades–burnt sienna, ochre, terra cotta–which seem weighted with darker colors at the bottom, the tower thus rising into the light. As with House of Hope, Sala invites entry and thus interaction between the structure and the observer.

Lotus Sound invites entry only for the eye and, perhaps, the spirit. A curved wall constructed of multiple terra cotta bells meets the gallery wall on both ends, thus prohibiting physical entry to the corner it encloses. Mounted on the gallery wall in the corner are gold-leafed lotus petals and stems, gleaming under a spotlight. The lotus symbolizes purity, spiritual growth and enlightenment. The alluring, but out of reach, presence of the leaves here suggests enlightenment as a goal, that the striving for its attainment, the process itself, is most important. The wall presents a physical obstacle, but its visual porousness leaves a path for the eye and spirit to pass through.

Melting Void: Molds for the Mind consists of three sculptures strategically grouped and mounted on long-legged metal bases, each resembling a plaster cast used in the lost-wax process to create bronze images of Buddha. The exterior surfaces are rough and encrusted with tools used in the process, imbuing the figures with a sense of entrapment, of being bound. But the inside surfaces of the heads are smoothly finished and highlighted with gold leaf. A late work, completed in the year before he died, Melting Void is completely different in its conceptualization from the other pieces in the exhibit, but itaddresses similar concerns, particularly that of interior, spiritual calm in tension with exterior turmoil in coping with the adversities of worldly life and the acceptance of mortality.

Western cultures have, of course, had periods in which deeply religious themes motivated great works of art. But the secularization of Western cultures has seen a parallel decline in the spiritual as inspiration for art; modernism seems only rarely to directly address metaphysical questions. Montien Boonma brought his devoutly religious belief (deepened by the tragic loss of his wife and his own all-too-abbreviated life) together with a mix of both Asian and Western art traditions to create a body of work that appropriates the latter to serve the former. His superbly balanced combinations of structure, form, color, light, and scent subtly draw the viewer into both intellectual discourse and the movingly spiritual.

Once experienced, the perishability of Boonma’s works evokes a certain sadness in a culture that seeks permanency in its art. But, to Boonma, it would seem, that was an integral part of his message. In one drawing he has written the text: "The lives of sentient beings are like the clay pots, which are destined to break sooner or later."