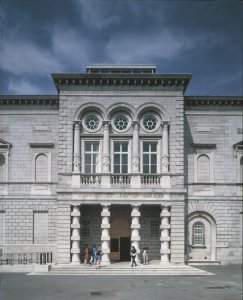 The National Gallery of Ireland was founded in 1854, neither particularly early nor late in the history of museums – the Louvre dates to 1793, the Prado to 1819, London’s National Gallery to 1824, the Metropolitan – a latecomer – to 1870. Perhaps it is unfair to compare Ireland’s gallery to such a listing: Ireland is a far smaller country and cannot command the financial resources the others do. (George Bernard Shaw’s legacy of one-third of his residual estate surely has enhanced the financial resources of the Gallery.)

But a national gallery serves first its own people and Ireland’s National Gallery houses an extensive collection of Irish art as well as a collection of European Old Master paintings. Travelling art lovers will find this to be a rewarding destination.

The exterior of the gallery presents an uninviting neo-classic facade with blank niches set along its length, rather like boarded up windows. The imposing entry portico shelters a small entrance into a rather plain space. There are some grand interior rooms, though the overall layout is confusing, a bit of a hodgepodge of original rooms and later additions. The anticipated opening in 2001 of a large, new, modernistic "Millennium Wing" is eagerly anticipated.

In the broad selection of European art there are samplings from many periods and many countries, without a sense of great depth in any particular area. The Gallery does have a substantial collection of Turner watercolors, but these evidently are exhibited only in January. The one Rembrandt is small and quite murky; a Goya, an 1810 portrait of an actress, is strange, indeed; the Rubens works are not of the first order.

On the other hand, there are works here to give pleasure to the most discriminating eye. Caravaggio’s The Taking of Christ is highly dramatic, the emotion of the moment reflected in spot-lit faces and hands against a dark background; the red of Christ’s robe repeats on a soldier’s trousers, together reinforcing the diagonal thrusts of the composition.

Tintoretto’s Portrait of an Elderly Senator captures the character of the legislator, clad in the richness of his fur trimmed robe. There’s an impressive Murillo, an enormous seventeenth century canvas, The Meeting of Jacob and Rachel at the Well. Among more contemporary works can be found a very fine Monet (A River Scene, Autumn, in which a sailboat glides on pointillist waters), an elegant Pissarro (Chrysanthemums in a Chinese Vase), and an important, superb Picasso (Still-life with a Mandolin, full of inventiveness – a most energetic still-life).

If one work alone makes a visit to the National Gallery an absolute must, it is the Vermeer, Lady Writing a Letter, with her Maid. When there are only 35 works by such a master in existence (and only exceedingly rare retrospectives such as the 1995-96 exhibit in Washington and the Hague), the opportunity to spend some unrushed, uncrowded time with this painting seems a privilege and a great luxury. The lady in question is seated at her desk, engrossed in her letterwriting. Her maid stands behind her, arms crossed, looking out of the window which is the source of light determining the patterns of light and shadow in the painting. There is a large painting on the rear wall and impeccable detailing in the window itself, the checkered floor, the sheer curtain and the heavy drapery, the tapestry-like fabric covering the writing table. The composition is focused by complex diagonals and achieves a balance that reinforces the sense of concentration in the letter-writer, the stillness of the moment. And yet, it is the maid who emerges as the physical and compositional center of the painting, and her distraction by the unknown happening outside the window (or, perhaps, simply her boredom within) that provides the active content and stimulates the viewer’s imagination. – Arthur Lazere