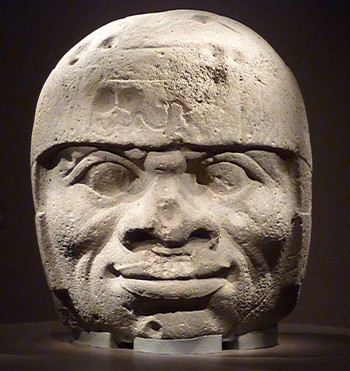 A colossal head carved from stone is one of a number on display
at the de Young in the Olmec exhibition.
Photo © by Emily S. Mendel

America’s oldest civilization, the Olmec, lived mainly in the Mexican Gulf Coast states of Veracruz and Tabasco from approximately 1400 BCE to 400 BCE. The Olmec lived contemporaneously with the Golden Age of Greece and China’s Zhou Dynasty.

Considered the mother culture of Mesoamerica, the Olmec disappeared about twenty-five hundred years ago. They left behind only mysterious traces of their civilization—notably, enormous freestanding sculptural heads carved from giant blocks or boulders.

“Olmec: Colossal Masterworks of Ancient Mexico,” at San Francisco’s de Young Museum through May 8, 2011, features over 140 carved objects including the massive inscrutable heads, a large-scale throne, monumental stelae (carved upright stones), figures, adornments and masks. Some of the awe-inspiring works on display are over eight feet tall and weigh up to eight tons. Each piece is unique.

At the start of the exhibition stands a six-foot tall, 12,000-pound highly stylized colossal head, looking like a foreboding statue with supernatural powers (à la Indiana Jones) with a strange head shape, slit-like eyes that stare straight ahead, a wide nose and sensuous full lips. As you gape at it, as everyone does, you’ll know that you’re not in Kansas anymore.

Using only basic tools like rock, water and sand, Olmec heads were carved from extremely hard materials. They had no metal tools. In fact, they hadn’t invented the wheel. The stone quarries were as far as eighty miles from the site of the statues, and the huge pieces had to be transported for long distances. It’s estimated that moving a colossal head might have required the efforts of 1,500 people for three to four months.

In juxtaposition to the colossal heads and other large pieces, the exhibition also features finely crafted small-scale jadeite and earthenware objects that some say symbolize the religious meaning and secular authority among the Olmec. Don’t miss the delicate jadeite masks and the earthenware fish effigy vessel.

While the Olmec colossal heads may depict a religious ruler, some Olmec art is surprisingly naturalistic and displays accurate depiction of human anatomy. Common motifs include downturned mouths and slit-like slanting eyes, both of which are seen as representations of were-jaguars (children with Jaguar features).

The mystery of the Olmec—who they were, where they came from, what they spoke, where they went and why they became extinct—is an essential feature of the exhibition. Olmec culture was unknown to historians until 1862, when a colossal head made in Veracruz was first discovered. Seventeen heads have now been unearthed. The mystery has fascinated the public and archaeologists ever since.

Little is known about the Olmec, but much is conjectured. Recent archeological research confirms that the Olmec constituted a major civilization with several large cities and outposts that spread to other parts of Mexico and Central America.

The Olmec’s political arrangements of strongly hierarchical city-state kingdoms were repeated by nearly every other Mexican and Central American civilization that followed. At their height, the Olmec had irrigation, writing, cacao and the Mesoamerican calendar and ball game. The compass, the invention of the concept of zero, bloodletting and perhaps human sacrifice are also attributed to them.

As an indication of how obscure their civilization is, the Olmec didn’t refer to themselves as “Olmec” at all. The Aztec mistakenly used that name to refer to people who lived in Mexico some 2,000 years after the Olmec became extinct. The name Olmec, which means “rubber people,” may be based on the rubber-producing region of Mexico where they originated.

The fascinating monumental heads remain among ancient America’s most awe-inspiring and beautiful masterpieces. The Olmec developed an iconic and sophisticated artistic style that spans the centuries. What they left behind is art, not merely artifact.