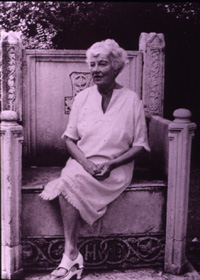 Should you choose to approach Venice&#146;s Collezione Peggy Guggenheim by gondola&#151;the Peggy Guggenheim museum, is located, like so much else in Venice, on the Grand Canal&#151;the first work of art you would see would be Marino Marini&#146;s 1948 sculpture, "The Angel of the City." A man mounted on a horse, the statue invites comparison with another famous Venetian equestrian statue, Andrea Verocchio&#146;s heroic tribute to the 15th-century condottiere (mercenary) Bartolomeo Colleoni in Campo Santi Giovanni e Paolo.

But where Verrochio&#146;s armed warrior is all heroic bragadoccio, Marini&#146;s rider, his arms spread, his face turned skywards, is open to the world. The only heroic thing about him is the size of his erection. Did I mention that he&#146;s nude? Colleoni&#146;s horse struts and prances; the Angel&#146;s steed stands stolidly on four legs, its head and neck stretched out parallel to the rider&#146;s&#151;er&#151;member.

No doubt the contrasts bespeak the differences between 15th- and 20th-century attitudes towards manliness as well as art, none of which I plan to go into here, because my purpose is to talk about the Guggenheim Collection.

First of all, you won&#146;t approach the museum by gondola, because the entrance is on a small street away from the canal. Housed in a curiously modern-looking 18th-century palazzo which, unlike its four- and five-story neighbors, is only one story tall (for some reason it was never finished), the museum is the former residence of Peggy Guggenheim (1898-1979), whose private collection of 20th-century art it contains.

To detour just a bit longer. Peggy Guggenheim was the great-granddaughter of Swiss immigrant Simon Guggenheim. Her grandfather, Meyer, made a fortune in metals (lead, silver, copper&#151;which commodities, by the beginning of World War I, Guggenheim was reputed to own 75 to 80% of). Though Peggy, whose playboy father Benjamin went down on the Titanic, was not one of the major heirs, she inherited enough to support her art habit.

Peggy began her career in the arts in 1938 as the owner of a gallery, Guggenheim Jeune, in London, hobnobbing with the likes of Samuel Beckett, Marcel Duchamp, and other giants of the art scene. When World War II came, she fled Europe and opened Art of This Century Gallery in New York, showing Surrealists and Abstract artists. She became an admirer of Jackson Pollock, whom she helped support from 1943 to 1948.

In 1947, Peggy returned to Europe, bought the house&#151;Palazzo Venier dei Leoni&#151;and showed her collection at the Venice Biennale. By this time she had amassed a wealth of Cubist, Abstract, and Surrealist works. Near the end of her life, Peggy, who had originally dreamed of opening a museum way back in 1939, decided to leave her house and her art to the public to serve as a museum. After her death in 1979, the museum was open in summer only, but it is now open six days a week (closed Tuesdays) year round.

It begins in the garden, the Nasher Sculpture Garden, one of the few green, leafy spots to be found in Venice. Works by Raymond Duchamp-Villon, Alberto Giacometti, and more recent artists seem casually placed among the trees and beside a round pergola. A tabby cat lounges in the sun beside a Henry Moore. Peggy is buried in a corner, next to her dogs, her "beloved babies"&#151;Peacock, Sir Herbert, Gypsy, Hong Kong, and the rest.

On entering the house (white walls, pinkish terrazzo floors), the first work that greets you is a 1941 Calder mobile. On the walls of the smallish entrance hall are Picasso&#146;s "Atelier" (1928) and "La Beignole" (1937). The rooms on the left&#151;Peggy&#146;s dining room among them&#151;contain more Cubists, including, together with the giants (Picasso, Braque, Marcel Duchamp) lesser-known figures such as Umberto Boccioni and Albert Gleizes. Francis Picabia&#146;s "Very Rare Picture on the Earth" (1915) features geometric forms and gold and silver paint. Brancusi&#146;s 1912 "Maiastra" is a bird-like figure in brass. Some African sculptures of the kind that inspired the Cubists are there too.

Photographs show Peggy Guggenheim in some of the rooms, identifying their function when she lived there. The library, now hung with de Chirico, Tanguy, and others, is a peaceful room facing the Grand Canal. It has a fireplace and a comfortable white leather couch&#151;according to the photograph, the same one that was there in Peggy&#146;s time&#151;for tired art-lovers to rest. The collection continues with a fine Chagall ("Rain," 1911) and works by Kurt Schwitters, Paul Klee, and Vasily Kandinsky.

As you continue through the museum, you begin to appreciate how closely connected Peggy&#146;s life and her taste in art were. Her loves were Cubism, Abstraction, and Surrealism (later she also collected the early Abstract Impressionists). She hated Pop Art, and none of it is to be found in the museum. On the other hand, there are many paintings by Max Ernst, the Surrealist to whom she was married for two years in the early Forties. A whole room belongs to Jackson Pollock. Another is given over to the charming, colorful, but finally not very significant paintings of Pegeen Vail, her daughter by her first husband Laurence Vail, a Dadaist sculptor and collage artist. (Pegeen was married to painter Jean Helion, a founder of a movement called Abstraction-Creation; his work is also represented in the collection.)

The collection also reminds us of the wittiness of many of the important 20th-century artists. Jean Arp&#146;s 1925 "Overturned Blue Shoe with Two Heels under a Black Vault," for example, is an abstraction for which Arp invented a funny title. Joan Miro&#146;s "Femme Assise II" (1939) deconstructs the female figure and face, with several of the seated woman&#146;s eyes going off in different directions. And of course there&#146;s Calder, who designed a silver "bedhead" for Peggy&#146;s bedroom. Hung with whimsical Calderesque fish, insects, and plants, the work still hangs on the wall of the room. (The room, complete with Calder "bedhead," is shown in a photograph with Peggy seated on the bed, holding one of her Shih-Tzu dogs.) Another Calder mobile, made of glass and china among other materials, a Clyfford Still, and an Archile Gorky also hang in the bedroom.

A wing of the palazzo is given over to the collection of Gianni Mattioli (1903-1977), who specialized in buying works by modern Italian artists, especially the Futurists. Included are some atypical early paintings by Giorgio Morandi, paintings by Carlo Carr� and Ardengo Soffici; Gino Severini&#146;s 1912 intense, fragmented "Blue Dancer," and an unusual Modigliani, his 1914 "Portrait of the Painter Frank Haviland," more Fauve-like and less smooth than his better-known works.

By the early Sixties, Peggy Guggenheim had stopped collecting art and instead concentrated on presenting what she already owned. She lent her collection to museums throughout Europe and America, including the New York museum named for her uncle, Solomon R. Guggenheim. It was then that she decided to donate her villa and her art to the Solomon R. Guggenheim Foundation on her death.

Though the Peggy Guggenheim Collection includes most of the great names of early and mid-20th-century European and American art, it&#146;s small in size. Going through it is less like a forced march than a saunter through someone&#146;s wonderful private home and garden&#151;which is just what it is. You come back outside refreshed rather than suffering from sensory overload.

Across the garden is the 1994 New Wing, which houses the Museum Shop (that&#146;s what it&#146;s called) and a cafe, where I had a first-rate open-face sandwich of bresaola, cheese, and arugula. The cafe has a large terrace, with awning and overhead heaters; inside on the walls are photographs of many of the artists represented in the museum.

Downstairs in the New Wing is a space for temporary exhibits. When I was there, the show was women painters of the Russian avant-garde. Unfortunately, I never got to see it, because there was a power outage affecting that part of the building.

This is, after all, Italy.