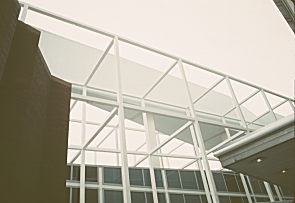 After the dismal years and mostly pastiche products of post-modern architecture, public interest has soared in response to genuinely visionary, strikingly original, and esthetically thrilling work that has followed. Daniel Libeskind’s Jewish Museum Berlin, Frank Gehry’s Guggenheim Museum Bilbao, and Santiago Calatrava’s Milwaukee Art Museum are all spectacularly successful buildings that have become destinations in their own right. (It’s no coincidence that some of the best new buildings are art museums–what more likely source of forward-looking, informed taste?)

But such designs do not spring into being as if by immaculate conceptions; they grow from the esthetics and philosophies and technologies that preceded them. How architects work–the gestation process that precedes their designs–is an intriguing, albeit somewhat esoteric subject.

Perfect Acts of Architecture, an exhibit that originated at the Wexner Center for the Arts at Ohio State University, examines the work of five architects during the period 1977-1987, a period of economic slowdown when not a lot of adventurous construction was going on. Here are drawings, collage, photomontage, and watercolors for projects that were never built, but that reveal the intellectual process and development of these leading architects during that moment in history before computers virtually revolutionized the design process.

Daniel Libeskind was chair of the architecture program at the Cranbrook Academy of Art and developed an international reputation as a theoretical, intellectual architect long before a single design of his was built. (The Jewish Museum was his first, completed in 1998.) Micromegas (1978) is a series of pencil drawings, with lines so lightly rendered it is necessary to get right up close to see. What is revealed is a densely detailed and complex voyage through line and space and negative space. No thought of brick and mortar imposes itself, despite the patently architectural nature of the drawings. Elegant in execution, refined in composition, these are art works unto themselves which illuminate a brilliant imagination.

Peter Eisenman, influenced by the theoretical linguistics of Noam Chomsky, was interested in a parallel approach to architecture in which the practical (function, context) is set aside in deference to a vocabulary of structure–walls, columns, and stairs arranged and rearranged in a design grammar, illustrated here in a series of axonometric drawings, House VI.. The Wexner Center, completed in 1989 was Eisenman’s first major public building, labeled by Spalding Grey, "the spaceship that crash-landed on the prairies." Consistent with his theoretical ideas, Eisenman used at Wexner multiples of 12 to establish proportional relationships between the architectural elements.

Rem Koolhaas, the Pritzker Prize winning architect whose store for Prada in New York has won wide admiration, and whose design for a proposed San Francisco building has earned predictable resistance from that city’s provincial burghers, is represented in this exhibit by Exodus, which was created for a competition in 1972. At once an exercise in city planning, architecture, satire, and social criticism, Koolhaas takes as inspiration the Berlin Wall–the superstructure that divides a city–and superimposes it on London. But this wall not only divides, it protects; it is an enclosure that separates an island of new architecture from the anarchic life of the city that surrounds it. At once a commentary on existing social/economic/esthetic division, a utopian plan for a dysutopian world, and an encompassing vision of the interaction of society and its architectural environment, Exodus is a densely layered, audacious and youthful work which has had an undiminishing influence in the thirty years since it was created.

Also included in the exhibit is Bernard Tschumi’s The Manhattan Transcripts, another visionary approach, this one powerfully influenced by film and narrative form. And Thom Mayne’s Sixth Street House beautifully exemplifies the way in which a conceptual approach, a desired architectural effect, challenged the existing methodology of architectural rendering and led Mayne to creative breakthroughs in technique.