Pieter Bruegel the Elder (1520?-1569), the great Flemish painter, was enormously popular during his lifetime due not so much to his paintings as to the wide dissemination of engravings based on his drawings. Through reproductions, Breugel’s works have broad public popularity to this day, attesting to the universal appeal of his imaginative and superbly rendered images and, as well, the humanistic outlook that they reflect.

Information about Bruegel’s life and work is spotty, creating an unending challenge for art scholars, especially in determining which works can be accuratelyattributed to him and which were by contemporaries, or were copies or outright forgeries. Over recent years, many works previously thought to be his have been found to be of questionable attribution and occasionally works previously thought to be by someone else have become accepted as his.

The Metropolitan Museum of Art’s current exhibition, organized with the Museum Boijmans Van Beuningen in Rotterdam and six years in preparation, brings together an astounding 50 of the 61 extant drawings. There are also some 60 prints, most exhibited side-by-side with the Brueghel drawing from which the engraving was created. An interesting addendum is a small group of prints created after Brueghel’s death in which can be seen the deviations from those made during his lifetime, when he worked closely with the engravers to be sure their work was in line with his intentions.

The comprehensiveness and the scholarly rigor of the exhibit will make it essential viewing for art professionals and a stimulus to further study; at the same time the brilliance and accessibility of the drawings and prints will appeal to a broad public. (Unfortunately the exhibit will not travel beyond New York. Lenders, understandably, do not like these works to be away from their collections for extended periods.)

Organized in roughly chronological order, the exhibit starts with a group of landscape drawings, many dating to 1552-1553 when Bruegel visited Italy where he was influenced in particular by the works of Titian. The landscapes, more often than not, have the vertical of a large tree in the foreground, deep perspective carrying the eye to distant vistas, and small figures of people and animals. The scale suggests the immensity of nature and the insignificance of man, a mere speck against the background. Even the castles dotting the hillsides seem dwarfed. Within that context there are also rivers with boats and roads with travelers, suggesting humanity’s journey through the vastness of the earth.

Most of the drawings are in pen and brown ink with which a range of lines, curves, dots and hatchings are used, the seemingly simple strokes together rendering the subject matter with masterful economy and an uncanny sense of immediacy. A unique standout is a "Wooded Landscape with a Distant View toward the Sea," in which the brown ink is complemented by brown wash, white gouache, and black chalk–all on blue paper, a startlingly different effect.

In the large selection of drawings as designs for prints are many surrealistic images, clearly influenced by Bosch. Indeed, Bruegel has been called the "second Bosch." "Big Fish Eat Little Fish," a widely known image, is one of many that illustrate proverbs. Not only the fish are eating; the men are using knives to cut the fish open. Only the fish with wings, flying in the sky, seems to have escaped the cycle.

"The Ass at School" has a satirical slant, showing both the animal (reading a sheet of music) and the exposed buttocks of a student about to be whipped, just one of the unruly crowd of children. Just how much learning is going on? The inscription: "If you send a stupid ass to Paris, if it is an ass here, it will not be a horse there.

A series of prints covers the seven deadly sins and the virtues as well. The sins delve deeply into Bosch territory, with multiple figures, animals, and grotesques graphically illustrating each. "Greed" is seated among bags of money. a huge purse, and a coffer, counting the wealth, in the midst of revelers, devilish figures, a frog prominently placed in front center. "Pride" is a woman admiring herself in a mirror, a peacock in full display beside her. "Anger" emerges from an army tent, sword in one hand, a torch in the other, together with armed soldiers attacking innocent and defenseless people.

On the virtuous side, "Justice" is as expected, blindfolded and holding her sword and scales, the punishment of wrongdoers illustrated on all sides. "Temperance," on the other hand, surprises with a clock on her head and a bit in her mouth.

A perennial favorite is the drawing "The Painter and the Connoisseur," in which the painter (perhaps a self-portrait?) seems interrupted by the potential buyer, who has his hand on his purse and examines the work in progress through his spectacles. It’s a symbiotic relationship fraught with complications, that between art and commerce–one that hasn’t changed noticeably since Breugel’s drawing more than four centuries ago. 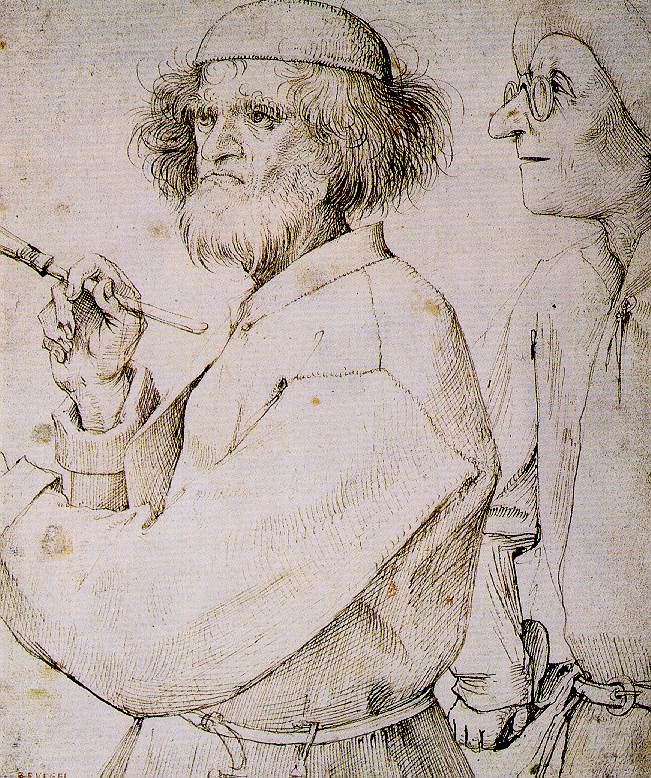