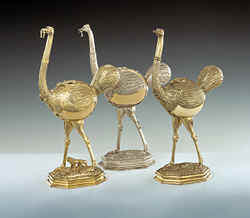 The &#147;princely splendor&#148; of the exhibition of northern European Renaissance art at the Metropolitan Museum of Art refers both to the craftsmanship of artistic production (including precious materials mined locally near Dresden) and to the fine art of collecting and exhibiting per se. The exhibition itself is a performance of the sixteenth-century Kunstkammer (art chamber), a Renaissance microcosm of the spectacle of the created world. The Dresden splendors were above all a deftly diplomatic gesture&#151;the Saxon Kunstkammer was itself both expression and consequence of princely power-brokering, idealized as the prince&#146;s magnanimity and generosity.

The four-decade span of the assembled art is particularly noteworthy because it marked a rare moment of peace. Saxony is noted as the &#147;Cradle of the Reformation,&#148; and the central doctrine of the German Lutheran Church, the Book of Concord, was published in Dresden in 1580. The Wettins, the elector rulers of Dresden, were grandly ambitious and used the unusual wealth&#151; of natural resources, developing mining and refining technologies, and that acquired from the sudden abandonment of Papal properties in the region&#151;to consolidate their power. In this interbellum era, the Wettin electors elevated agrarian middle-class Dresden into a European cultural and political center. The forty-year peace ended with the outbreak of the Thirty Years War in Prague.

Much of the mesmerizing quality of the exhibition comes from its effective re-creation of the source Kunstkammer&#151;the Grune Gew�lbe (Green Vault) and Rustkammer (Armory) museums of (post-Communist-era) reconstructed Baroque Dresden. Elector August laid the foundation for the later Baroque blooming of this Florence-on-the-Elba. His is one of the great collections of European armor and a rich assortment of parade weapons and armor is included in the exhibition.

August also collected only the most exquisite samples of indigenous technology (i.e., gardening and farming tools), primarily those with artistic value, elaborately decorated, carved, and inlaid with precious materials. One precious stone of particular importance was serpentine, mined locally in nearby Z�blitz. Serpentine, usually found in mottled, dull green shades of color in nature, is excavated and worked in its damp state, dried, and then polished. One entire room is devoted to serpentine vessels, such as ceremonial tankards andcanisters, while inlays of serpentine are found in objets d’artthroughout the exhibition. Another gallery is given over to turned ivory works, typically purely decorative vessels, executed in intricate geometric forms, sometimes with a jarringly modern effect. Of particular note are a column with an icosehedron and anther with atetrahedron.

Much of the exhibition space is devoted to a teaching museum collection (the essence of the Kunstkammer philosophy) of objets d&#146;art as reliquaries, sorted by primary raw material. A room of wrought silver contains decorative drinking vessels, table clocks, golden hens and pelicans with nautilus shell bellies. Another contains golden automatons (self-operating mechanisms), with George Slaying the Dragon a recurrent motif, ceremonial gold cups crowned by human or animal figures sprouting red coral antler headdresses. Yet another room contains elaborately crafted and decorated crystal ware. The profusion of embellished precious objects overwhelm with the luxury of pure ornament, reflecting an obsession with amassing the rare and fabled, enabled by the privilege and wealth gained through consolidated power.

This is, in fact, the taste, the effort, the strategy of early nouveaux riches. Some objects mirror the material conditions of their creator-collectors, such as the parade weaponry, the elector rulers&#146; portraits, and items of ceremonial wardrobe. Other items embody the political spirit of the amassing campaign, such as a small treasury of Italian bronze sculpture, objects given and received among dignitaries. The standing Mars and the racing Mercury (an allegorical representation for the Medici family), figures by Giambologna, clearly indicate the high esteem in which the Medicis held the Wettin family. There are various bronze pairings of nymphs and satyrs by Adriaen de Vries, a strikingly primitive-modernist Black Venus (African Woman with Mirror), and a striding stallion poised atop a wood box inlaid with Bohemian landscapes.

Under the banner of &#147;quanta raroria, tanta meliora&#148; (&#147;the rarer, the better&#148;), the Kunstkammer celebrated magnificence and splendor as humanistic values, housed collected works of art, works of industry and technology, and wonders of nature as a living catalog of the grandeur of creation. Thus, the Kunstkammer gave material form and aesthetic realization to the concept of the Gesamtkunstwerk, that very Germanic notion of the &#147;total work of art."

Princely Splendor makes great strides in rescuing the Dresden legacy from the obscurity brought on by the fire-bombings of World War II, the neglect of Soviet rulers, the passing of the centuries and the fading of the dominance of German aesthetics. Sumptuousness gives way to an overwhelming nostalgia. The one serious&#151;and insurmountable&#151;drawback is the decontextualizing of the Kunstkammer. The only antidote (and a most felicitous one) will be its permanent installation as the jewel in the crown of the Gesamtkunstwerk of Baroque Dresden itself. Reconstruction is now under way in Dresden to restore the exhibition rooms to their former glory. Once these objects are put on view in the restored historic Green Vault in 2006, such a quantity as exhibited in Princely Splendor will not be allowed to travel again.