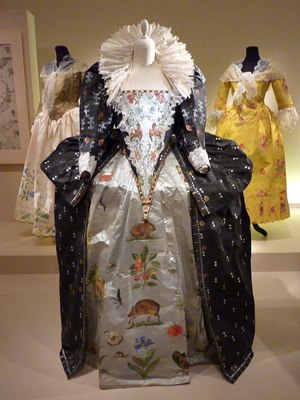 Her first U.S. exhibition, “Pulp Fashion: The Art of Isabelle de Borchgrave,” is on view at the San FranciscoLegion of Honor until June 5. It’s quite a coup for the museum, and follows a number of well-received exhibitions in the Museum’s Collection Connections series.

Though de Borchgrave is a painter by training, textiles and paper became her métier 17 years ago. Working in collaboration with leading costume historians and young fashion designers, de Borchgrave and her team create a world of gorgeous finery from simple rag paper.

Taking inspiration from the rich portrayals in early European paintings, iconic costumes and fashions in museum collections, photographs, sketches and even literary descriptions, de Borchgrave’s exquisite paper pieces achieve the effect of textiles by crumpling, pleating, braiding, feathering and painting the surface. The creations are not simply paper copies of the originals. De Borchgrave brings artistry to her works by exploring the minds of the artists who created or depicted the gowns and imagining the psyche of the women who wore them.

In addition, she does not literally duplicate patterns. Instead, she masterfully works the paper to a desired effect. With her trompe l’oeil gowns, she invites her viewers to explore her imaginary world and to create their own illusions. In this way, de Borchgrave transports her audience to another time and place.

De Borchgrave, 64, who led the press through a preview of the exhibit, is stylish and effervescent. Her expressive face and hands were in constant motion as she discussed her art. Her costumes are larger than reality, she explained, because “bigger is a better reference.”

Her family, the de Borchgraves d’Altena, is old and noble, yet she has designed paper goods for Target, Villeroy & Boch and Caspari (yes, you’ll find some in the gift store). The commercial licenses help fund the creation of her paper dresses, each of which takes a month to create.

Although her works are enchanting, they may appear at first to be merely frivolous costumes. On closer inspection, one can see that they are remarkably intricate—an entirely original art form from a unique talent. De Borchgrave successfully blends many complex disciplines—paper, painting, sculpture, textiles, costume, installation, illusion and trompe l’oeil. As you explore “Pulp Fashion,” you may find yourself repeating the phrase, “No, that can’t be paper.” Yet it is.