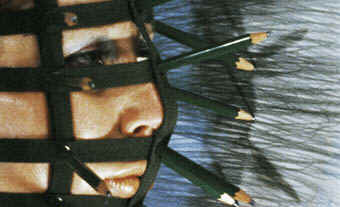 The sprawlingly inclusive use of media by artists today marks the work of Rebecca Horn, born in Germany in 1944 but resident in New York, Paris and Berlin, where she also is at home in just about any medium you can name. Rebecca Horn: Bodylandscapes surveys the diversity of her work and also makes apparent the importance of that old-fashioned first step, drawing, for this thoroughly contemporary artist. Eighty works on paper and around 25 sculptures and installations make up the show.

Drawings are where she has always started although recently, at times, drawings have become ends in themselves. The Burning Gardens of Smyrna 1922 in pencil, color pencil, acrylic, and ink on paper is one of several large scale but surpassingly delicate works completed last year. At approximately 6 by 5 feet, these works engulf the viewer and impart a sense of pain despite their beauty. The colors – a whole range of reds and yellows, some blues, often set off by black – are associated with blood, fire, disaster, pain. Their size is determined by the artist&#146;s own reach as she stands before a wall-mounted paper, so is dependent on her body. The body is the center of her work.

Our bodies&#146; vulnerability, extrapolated to summon up the teetering at the edge of catastrophe which seems to be the human condition, is the recurrent subject here. Horn knows a good deal about bodily pain, having early in her career suffered severe lung poisoning from sculpting in fiberglass and polyester without the protection of a mask. During a long convalescence she drew and planned work that took her in a new direction, in which the body itself is a prominent feature. Performance art, filmed, was a natural outlet. The exhibition includes screenings of some of the performances, as well as drawings which preceded them. A sketch from the late 1960s showing a device to extend the fingers, for instance, is realized in fabric and balsa wood for Fingergloves (1972).

She dresses the body in peculiar ways. &#147;Pencil Mask&#148; (1972) covers the head with leather strips in which are set 21 sharpened pencils; drawings of a sort can be made by turning the head in proximity to paper. The mask, looking weirdly medieval, is on view and a clip from the film runs near by. In a piece that may reference Frido Kahlo, an earlier artist who also found her theme in her body, the subject wears a costume of bandages with her young breasts exposed, exactly like Kahlo in her painting Broken Column. The Kahlo painting, at the Tate Modern, strikes a strong parallel although there was no mention of it in the Bodylandscapes exhibition label. Horn adds mystery and myth by crowning her subject with a slender, pointed column two or three feet tall and calling the work Unicorn. The costume itself is in the exhibition, along with a beautiful still from the film. Feathers, which of course come from bodies although not human ones, appear frequently. The motorized Cockfeather Mask (1972) capitalizes on the quick response of a feather suddenly released from restraint, and feather fans designed and used for performances are also shown.

A strong literary thread runs through Horn&#146;s work. She has read widely and thoughtfully and, as a sometime poet, shows an evocative turn of phrase in many titles (Heartshadows for Pessoa, Floating Souls, Painpaper). Writers are her subject in more than one work. The startling Knuggle Dome for James Joyce (2004) brings two mechanized &#147;hands,&#148; each composed of four kitchen knife fingers, into dancing contact with each other in a manner that combines danger and grace, a combination not unknown in Joyce&#146;s own art. Salome (1988) pays fantastic tribute to Oscar Wilde by a mechanized contraption that utilizes &#147;two turkey eggs, paint, metal construction, brush and motor electronics&#148; to produce, at intervals, a glorious spatter. Kafka, not surprisingly, is another of her literary references. Inside a glass case in Kafka Cycle (1994) are a book, suitcase, shoes, and umbrella that rock about a bit thanks to an electric motor. In Amerika, the unfinished novel Kafka set on a continent he himself had never visited, the protagonist finds his suitcase and umbrella have disappeared &#147;in the belly of the ship. . .his Europe lost. . .in nightmare odyssey.&#148; Was Kafka&#146;s phrase, &#147;the belly of the ship,&#148; what led Horn to the 2002 pi�ce de resistence of this exhibition, Light Imprisoned in the Belly of the Whale?

This wonderful, hallucinatory installation fills a darkened room and lets the viewer, seated on a low bench that hugs the wall, feel as though he is drawing breath in a new, wholly foreign environment. Choral music, muted but insistent, composed by Hayden Chisholm for the piece, fills the ear. Filling the eye are large, shallow basins of water set on the floor, a gilt rod slanting down from the high ceiling and moving along the water&#146;s surface, light-projected words that float across the walls and around the room like ideas embodied, suggesting a world in which thoughts may run as freely as the lighted phrases on the walls.

(22386)
$17.70 (as of January 25, 2021 - More infoProduct prices and availability are accurate as of the date/time indicated and are subject to change. Any price and availability information displayed on [relevant Amazon Site(s), as applicable] at the time of purchase will apply to the purchase of this product.)

(16435)
$7.64 (as of January 25, 2021 - More infoProduct prices and availability are accurate as of the date/time indicated and are subject to change. Any price and availability information displayed on [relevant Amazon Site(s), as applicable] at the time of purchase will apply to the purchase of this product.)
related posts