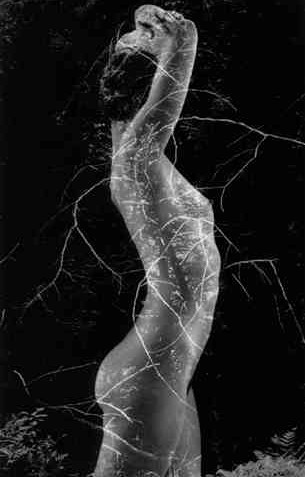 It is Ruth Bernhard’s year. San Francisco’s Ansel Adams Center mounted an exhibition of her work in April, J.J. Brookings has just opened a retrospective, and Photo San Francisco, a 70 dealer exposition, kicks off next week with a reception in her honor. Much will be made of her longevity, still active at 95, but it is her art, not her age, which places her in the pantheon of the masters and elicits hosannas from critics and public alike.

Starting as a commercial photographer in New York in 1927, Bernhard met Edward Weston while on a trip to California in 1935. Weston’s work inspired Bernhard to the potential of photography as art. She moved back and forth between the east and west coasts over the years, finally landing in San Francisco which has been her home since 1953. She has been associated not only with Weston, but also with Imogen Cunningham, Dorothea Lange, Minor White, and Ansel Adams, all California photographers of the first rank.

The retrospective at JJ Brookings shows some 100 images taken from the 1930s into the 1970s, at which point, evidently, Ms. Bernhard ceased to produce, at least for public consumption. There are a great many female nudes throughout these decades, as well as children, leaves, shells, and even some excursions into the surreal.

Quicksand (1936) shows a wooden display hand that seems to be reaching up from the ground, a log behind it, a dark, sort of woodsy setting, strange and mysterious. In Creation, another photo from the same year, a similar hand holds the unconnected head of a doll against a deep background landscape–unusual for Bernhard who rarely delved into landscape. Even much later, in 1946, a heavily decorated carousel horse against a black background somehow carries a subtly strange, surreal mood.

The shell photographs are elegant, particularly in their extraordinary use of light and shade. The same is true of the 1952 Leaves – two leaves, partly brightly sit so as to show every vein, partly darkened into silhouette. Pectin Nodosis shows shells lit with a strong theatrical sense of contrast. The Shell in Silk evokes an inevitable comparison to female anatomy.

But it is in the nudes that Bernhard’s art shines brightest–young, firm, idealized female bodies worshipped by the camera, limbs stretched, folded, or wrapped around the body in endless variations, all resulting in superbly controlled compositions, perfectly molded in light and shade. The 1962 nude In the Box-Horizontal is languorously stretched out, at rest, not confined by the box though lying in it. From the same year, the nude In the Box-Vertical is tense, confined by the box, vulnerably exposed, stretching out as if straining for freedom like a distaff Michelangelo prisoner. These photographs extend beyond the pure figure studies that predominate; in creating a more heightened sense of mood and contrast, they suggest something more complex than the purely sculptural look of many of the works.

Bernhard experimented at times–as in the 1969 nude photographed behind rice paper creating a wonderfully textured surface behind which the perfect face and body are lit, as always, exquisitely. And in Symbiosis(1971) it appears that Bernhard tried her hand (with great success) at darkroom manipulation, with three superimposed planes, the model in the middle plane.

But Bernhard’s experimentation was cautious, conservative, and, more often than not, she seemed to return to her most successful templates–variations on her themes ofthe female nude, posed and lit as classical, sculptural ideals. It is a limited palette, but one in which she worked with peerless perfection. Ansel Adams hailed Bernhard as "the greatest photographer of the nude," an astute observation both for what it says and for what it doesn’t.